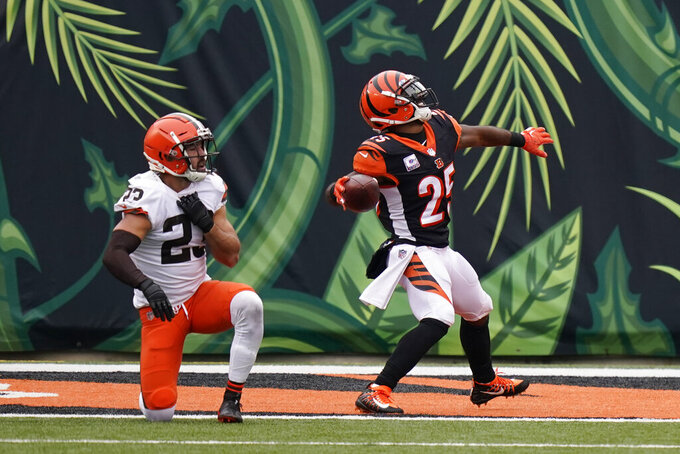 The fantasy football season continues to be unkind to running backs, leaving owners in a weekly scramble to either find the immediate backup to their injured starter or roll the dice in hopes of discovering gold on the waiver wire.

Week 8 is no exception, especially with four of the top 20 backs (James Robinson, David Johnson, Antonio Gibson and Kenyan Drake) each on byes. The position’s cupboard isn’t entirely bare, leaving owners with at least a glimmer of hope of discovering production.

JAMYCAL HASTY, RB, 49ers: Jeff Wilson Jr. took 56% of the snap count on his way to 112 yards and three TDs in Sunday’s rout of the Patriots. However, Wilson joins fellow RB Raheem Mostert on the short-term IR, which opens the door for Hasty, who produced 73 yards from scrimmage on 10 touches. The Niners appear to be trending away from Jerick McKinnon in favor of Hasty’s potential. Fantasy owners should do the same by adding Hasty, who could be in line for a solid Week 8 against the suspect Seahawks defense.

CARLOS HYDE, RB, Seahawks: Starter Chris Carson (knee) may miss Sunday’s showdown against the 49ers, giving Hyde the opportunity to take the bulk of Seattle’s RB snap count. Hyde, who rushed for 1,070 yards with the Texans last season, showed he could carry a ground game as he ran for a touchdown and had 76 total yards on 18 touches during the Week 7 loss to the Cardinals. He’s never been much of a receiver out of the backfield and will likely give way to either Travis Homer or DeeJay Dallas in obvious passing situations. Regardless, Hyde is worth pursuing.

GIOVANI BERNARD, RB, Bengals: Despite averaging just over 3 yards per carry, Bernard has hit double-digit scoring in each of the past two games. Much of his value lies in his receiving skills, making Bernard more valuable in PPR formats. He had a decisive 76% snap count in the Week 7 loss to the Browns and should be able to maintain that pace if starter Joe Mixon (foot) is unavailable for a second straight game.

STERLING SHEPARD, WR, Giants: Shepard came off IR in Week 7 and caught six passes for 59 yards and his first touchdown of the season in the loss to the Eagles. His return is a welcomed presence for QB Daniel Jones, who will look to target Shepard at least 8 to 10 times per game. Shepard is a much better producer than his 9.6 yards per catch indicates, so add him and give him another game or two before he places a firm grip as the Giants’ WR1.

LA’MICAL PERINE, RB, Jets: The Jets have slowly given Perine an extended look at the position. Perine scored his first touchdown in last week’s loss to the Bills and added a pair of receptions as well. He has upside, yet the Jets’ struggles on the offensive line will curve that potential. Still, the fact Perine had a 67%-31% edge over Frank Gore in Week 7 snap counts makes him worthy of a look, more-so if a fantasy owner is looking for a high-volume substitution this week.

CHASE EDMONDS, RB, Cardinals: Although Arizona is on a bye this week, the Cards will be without starter Kenyan Drake (ankle) for at least a few weeks. Drake was not too impressive when healthy and was yielding snap counts to Edmonds, who averages 6.1 yards per carry and has had more than three times as many targets (31-10) than Drake. This presents a potential changing of the guard, as it would be very difficult to slow down Edmonds and it could move his flex-caliber production into a low-end RB1, which he could be in PPR formats.

RASHARD HIGGINS, WR, Browns: With Odell Beckham (ACL) out for the season, Higgins is in position to emerge as a reliable fantasy option. Higgins caught all six of his targets for 110 yards in Sunday’s win over the Bengals and has pulled in 10 of his past 11 targets. He now represents the best deep option in Cleveland’s passing attack and will continue to see his share of targets from QB Baker Mayfield. There is a lot to like about Higgins’ upside, making him a low-risk play with a very high ceiling awaiting.

JOE BURROW, QB, Bengals: In terms of total points through the first seven weeks of the season, Burrow has out-produced the likes of Lamar Jackson, Drew Brees, Ben Roethlisberger and Matthew Stafford. Burrow is third in the league in passing yards and his willingness to run has resulted in three rushing touchdowns for the first overall pick of the draft. Although it’s too soon to consider him a must-start on a weekly basis, Burrow has become a very good streaming option who gets a solid Week 8 matchup against a Titans defense that has allowed 282 receiving yards per game.

RICHARD RODGERS, TE, Eagles: Philadelphia QB Carson Wentz always relies on his tight ends, so with both Zach Ertz and Dallas Goedert on IR, Wentz turned to Rodgers in the Week 7 win over the Giants, connecting with him six times for 85 yards. Outside of breakout WR Travis Fulgham, Rodgers has emerged as the second option in Philly’s passing game and could merit a low-end TE1 ranking in Week 8 when the Eagles meet a Cowboys defense that has struggled keeping tight ends out of the end zone.

JALEN GUYTON, WR, Chargers: Although the second-year wideout has just eight catches, Guyton is averaging a staggering 32.3 yards per catch and has had touchdowns of 72 and 70 yards in the past three games. Guyton averages fewer than two targets per game, but the home run potential and the slowly building rapport between him and QB Justin Herbert is enough to consider adding Guyton in deeper leagues.