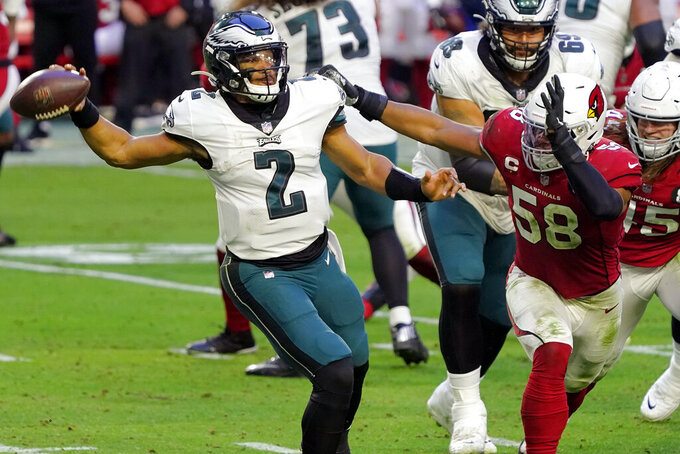 Championship week has arrived in fantasy football. In a season that gave us Wednesday Night Football, a stream of injuries to high-end running backs and the fantasy struggles of Cam Newton and Carson Wentz, the accomplishment of getting to Week 16 is more magnified than previous fantasy seasons.

However, just because fantasy title contenders have reached the finish line doesn’t mean ignoring the waiver wire, which has a handful of difference-makers who can help clinch a fantasy championship.

JALEN HURTS, QB, Eagles: Whether he’s the long-term option is subject to debate, but for now, Hurts is a quarterback that can start for fantasy title-worthy squads. Although his completion rate (55.1%) is dicey, there’s no questioning the overall body of work in his first two starts: four touchdown passes without an interception in 74 attempts along with 169 yards rushing and a touchdown on 29 carries. Hurts gets a very fantasy-friendly Week 16 date against a Cowboys defense that is ninth-worst in fantasy points per game allowed to opposing quarterbacks, making him a very sound option for fantasy owners who may be lacking a bit at the position of late.

TONY POLLARD, RB, Cowboys: Pollard rewarded fantasy owners who gambled on him upon news of Ezekiel Elliott’s Week 15 scratch as he produced 69 yards and a pair of scores on 12 carries along with catching six of his nine targets for 63 yards. Elliott’s status for Sunday’s game against the Eagles will be worth monitoring, but if Elliott remains sidelined, Pollard would make for a solid RB2, especially in PPR formats.

RUSSELL GAGE, WR, Falcons: Because of injuries to other key wide receivers, Gage a worthy must-add across the board. Over the past three games, Gage has been targeted 25 times, pulling in 14 of those for 201 yards and two touchdowns. Atlanta’s run offense has been stagnant at best, leading to QB Matt Ryan throwing the ball at a high rate. The Chiefs, the Falcons' Week 16 opponent, have been tough against opposing receivers, yet Gage should be considered as a WR3/WR4 with a reasonable ceiling.

SALVON AHMED, RB, Dolphins: Like the aforementioned Tony Pollard, Ahmed was a surprising source of fantasy production in Week 15, rushing for 122 yards and a score in Miami’s win over New England. The question with Ahmed is whether he will get another opportunity to dominate the Dolphins’ snap count at running back, as Myles Gaskin could return this week at the Raiders. Throw all caution in the wind and add Ahmed with an eye toward starting him as either an RB2/Flex versus a Las Vegas defense that allows the third-most fantasy points per game to opposing running backs.

JEFF WILSON, RB, 49ers: Even sharing carries with Raheem Mostert, Wilson proved solid, rushing for 60 yards and a touchdown in the Week 15 loss at the Cowboys. Like Mostert, Wilson sustained an injury during the game, yet it appears he stands a better chance to be ready for Saturday’s game against the Cardinals. Wilson has double-digit carries in three of the past four games, so regardless as to who else might be healthy in the banged-up San Francisco backfield, all signs point toward Wilson being the back of choice.

GIOVANI BERNARD, RB, Bengals: Bernard had a season-best 26 touches in Monday’s upset win over the Steelers that included touchdowns both rushing and receiving. That’s the type of workload that makes a back such as Bernard intriguing in Week 16 considering the Bengals get a favorable matchup against a Texans defense that allows the second-most fantasy points per game to opposing RBs.

RASHARD HIGGINS, WR, Browns: He’s more of a deeper league option, but Higgins is capable of helping a championship finalist. He’s scored touchdowns in two of his past three games while accounting for at least 68 receiving yards in all three games. Higgins is an interesting Week 16 add due to the Browns facing a Jets defense that is the seventh-worst in fantasy points allowed per game to opposing receivers.

CHAD HANSEN, WR, Texans: Another deeper league dive, Hansen scored his first touchdown in last week’s loss to the Colts, giving him three straight games with double-digit fantasy numbers. He was targeted just three times, but his production makes it clear that Deshaun Watson knows where to find him. Hansen is the type of deep sleeper who could reward the owner risky enough to play him in Week 16 against the Bengals.