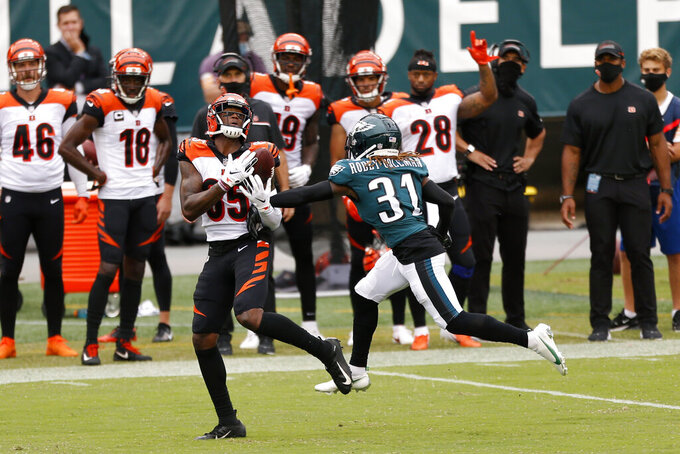 Unlike the first three weeks of the regular season, the rush to the Week 4 waiver wire isn’t as intense.

Still, there’s more than enough available options to help brace for the start of bye weeks along with adding depth to fantasy football rosters.

JUSTIN JEFFERSON, WR, Vikings: The rookie from LSU had a breakout game in Week 3, getting the best of Titans CB Malcolm Butler with seven catches for 175 yards and a touchdown on nine targets. Jefferson’s 71-yard touchdown catch was a reason why the Vikings selected him 22nd overall, and with a matchup against a Texans secondary that struggles with stopping receivers after the catch (25th in YAC allowed), Jefferson merits WR3 status.

TEE HIGGINS, WR, Cincinnati: Higgins scored his first two NFL touchdowns in Sunday’s tie at the Eagles. After not being targeted in Week 1, the rookie from Clemson has seen 15 targets over the past two games while seeing his percentage of snaps go from 22% in Week 1 to 79% last Sunday. Although his catch rate is just over 50 percent, Higgins will continue to be an important part of a Bengals passing game that will usually be in catchup mode most weeks. As the season goes on, don’t be shocked if Higgins’ production begins to exceed that of veteran A.J. Green as Cincinnati’s youth movement unfolds.

CARLOS HYDE, RB, Seahawks: Starter Chris Carson will be sidelined for at least a couple of weeks, giving Hyde the opportunity to own the bulk of Seattle’s RB snap count. Hyde had five touches for 23 yards from scrimmage in the Week 3 win over the Cowboys and is in position for more this week against a Dolphins run defense that allows 4.9 yards per carry and is tied for 29th in rushing touchdowns allowed (five).

MO-ALIE COX, TE, Colts: Cox has snatched the starting role from Jack Doyle, catching 10 of his 11 targets the first three weeks. Cox is a former college basketball player who happens to have a QB in Philip Rivers who helped turn another converted hoopster (Antonio Gates) into a Hall of Famer. Cox already has a 100-yard outing, and his continued rapport with Rivers will make him an imposing red zone threat, especially in Week 4 against a Bears defense that has allowed TEs to score in two of the first three games.

RANDALL COBB, WR, Texans: He’s become the closest thing to a go-to target for QB Deshaun Watson, who has hit Cobb on 11 of 13 targets. The duo teamed up for a touchdown in the Week 3 loss at the Steelers and the veteran’s ability to exploit the middle of the field gives Watson a solid option beyond Will Fuller. Cobb offers some upside in deeper leagues yet remains a good source of depth once bye weeks begin in Week 5.

JEFF WILSON JR., RB, 49ers: One of a host of backups now playing bigger roles in San Francisco, Wilson had both a rushing and receiving touchdown in Sunday’s win at the Giants. With RB Jerick McKinnon sustaining a rib injury on Sunday, Wilson could see a more considerable role in Sunday night’s game against the winless Eagles as Tevin Coleman remains on injured reserve and Raheem Mostert will be a game-time decision. If Wilson is the starter, he will make for a solid one-week rental for fantasy owners.

NICK FOLES, QB, Bears: The Bears have turned to Foles as their starter following his 188 yards and three touchdown passes in the Week 3 rally past the Falcons. It’s unlikely Chicago’s offense becomes up-tempo, but the addition of Foles will bring good news to owners of WRs Allen Robinson and Anthony Miller, both of whom will see modest upgrades in their fantasy potential. With RB Tarik Cohen (knee) out for the remainder of the season, Foles' presence also translates to more targets for the Bears’ wideouts.

BRIAN HILL, RB, Falcons: Todd Gurley hasn’t provided much explosiveness, which is why his fantasy owners should be clamoring for Hill, who had nine carries for 58 yards and a touchdown in Week 3. Hill also had a 22-yard reception and while his snap count (34%) continues to dwarf Gurley’s totals, keep in mind that Hill is averaging better than a yard per carry (5.1) than Gurley (4.0). This is a situation to watch.

DALTON SCHULTZ, TE, Cowboys: Schultz is still under the radar but should merit consideration for fantasy owners looking for better output from their tight ends. Dallas faces a Cleveland team that allows an average of seven completions per game to opposing TEs, making Schultz a potential sleeper play. After earning 10 targets in Week 2, Schultz was targeted six times in the loss at the Seahawks, catching four for 48 yards. The Cowboys have several offensive options, yet Schultz is in position to make fantasy owners look good for playing him.

CHASE CLAYPOOL, WR, Steelers: Despite having just four targets, Claypool was on the field 76% of the time in Sunday’s win over the Texans, a clear sign the team has big plans for the Canadian-born rookie from Notre Dame. Claypool is averaging 25.5 yards per catch on his six receptions, and his size/speed combo makes him a potential nightmare matchup from any part of the field. Diontae Johnson left Sunday’s game with a concussion, which could open the door for Claypool to be more involved in the Week 4 matchup against the Titans.

ALEXANDER MATTISON, RB, Vikings: Owners of Dalvin Cook might want to find a roster spot for Mattison after Cook tweaked his ankle in the fourth quarter of Sunday’s loss to the Titans. Mattison averages 5.3 yards per carry and would be able to provide solid production should Cook miss considerable time. Adding Mattison is a “rather safe than sorry” scenario in the event one of fantasy football’s elite backs is sidelined.