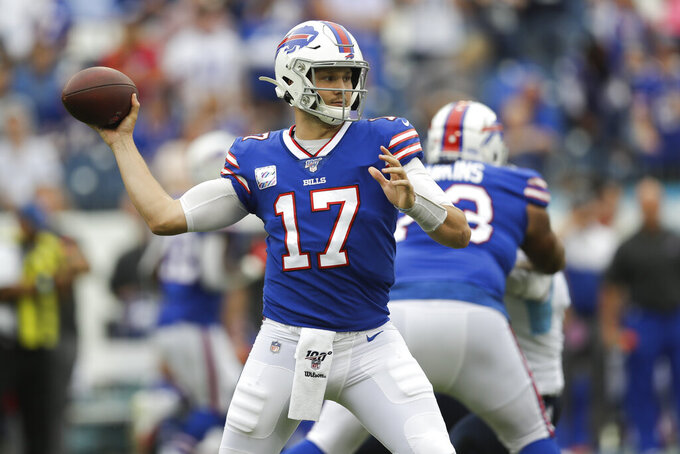 It's sad to think about but we're already heading into Week 7 of the fantasy football season.

Whether you need to get your team back on track or you just want to continue to stockpile your assets, there's something for everybody. Let's jump in.

Now is the time to buy in on Buffalo's pass game given its next five matchups (vs. MIA, vs. PHI, vs. WAS, @ CLE, @ MIA). Let's focus on just Week 7 for now, against the Miami Dolphins. Josh Allen will come off the bye facing a defense that has allowed the most fantasy points to quarterbacks this season. In fact, they've allowed 14 passing touchdowns with just one interception. Josh Allen has shown signs of improvement as well, increasing his completion rate from 52.8 percent in 2018 to 62.6 percent this season. We know he can make plays with his legs, also, evidenced by his 41 rushing attempts. He's second behind only Lamar Jackson in rushing attempts despite playing one fewer game because of the bye. Allen is the QB add not just for this week but the next five weeks. If Josh Allen is already owned or you're an Indianapolis Colts fan, you can turn to Jacoby Brissett. He's not Andrew Luck but he's also not the Brissett we saw back in 2017. He's improved and coach Frank Reich has put him in a great position to succeed. Brissett is top 12 in fantasy points per game, thanks to 10 passing touchdowns and just three interceptions. In Week 7, Brissett will face the Houston Texans, a defense that has allowed six passing touchdowns over their past two games.

Sam Darnold had not played since Week 1 because of mononucleosis but he did not miss a beat in his Week 6 return against the Dallas Cowboys. Darnold went 23 for 32 with 338 yards (10.6 yards per attempt), two touchdowns, and one interception, currently standing as QB9 in Week 6. I wouldn't want to trust him against the Pats defense in Week 7, but the schedule softens up big time after that. If you're looking for a long-term play at quarterback, Darnold is in that conversation.

Frank Gore still has it, evidenced by his 4.4 yards per carry and his Week 4 performance against the Patriots. And the Patriots are allowing just 3.44 yards per carry to running backs this season. In that game, Gore ran for 109 yards. No other running backs has run for more than 38 yards against the Patriots this season. It also helps when you have an improving offensive line. As of now, the Bills offensive line is second in run-blocking, according to Football Outsiders.

Gore will face the Dolphins in Week 7, a defense that is allowing 4.80 yards per carry to running backs and just allowed Adrian Peterson to run for 118 yards. Rookie Devin Singletary should be back, but I don't think that will stop Gore from getting 12 to 16 touches in this matchup. Another running back you can target is Alexander Mattison of the Minnesota Vikings. Mattison is coming off a Week 6 game with a season-high 14 carries and 63 yards. He had 22 more rushing yards than Cook on two fewer carries, against a stout run defense in the Eagles. Mattison has 252 rushing yards on the season, the same amount as Joe Mixon and more than James Conner and Austin Ekeler. Mattison isn't going to steal Dalvin Cook's job but if something were to happen to Cook, Mattison becomes a high-end RB2. That kind of upside needs to be owned.

Chase Edmonds is another backup running back to own. While he did just score a touchdown against the Atlanta Falcons, he hasn't played more than 27 offensive snaps in a game this season. The reason he should be owned is because David Johnson has been dealing with a back injury plus he has a surgically repaired wrist. It's a similar situation for Malcolm Brown and Darrell Henderson of the Los Angeles Rams. Todd Gurley is dealing with injuries. Brown is likely owned in your league but if he isn't, make sure to add him. Henderson, third-round pick in this year's draft, was the backup to Brown in Week 6 but was far more efficient. If he can overtake Brown, he definitely has more upside. Last but not least is Mark Walton of the Miami Dolphins. Walton played a season-high 42 percent of the Dolphins snaps and had 11 touches, which included five receptions. Kenyan Drake is a trade candidate and if that were to happen, Walton would become a weekly flex play.

Dante Pettis at WAS

Check to make sure if the Bills' John Brown is owned in your league but he likely is. That leaves us with Cole Beasley and Duke Williams. If you've played fantasy football the past few years, you know Beasley as the safe, reliable bye-week replacement. That holds true against the Miami Dolphins, who are allowing the ninth-most fantasy points to wide receivers this season. Beasley is coming off his worst game of the season (three catches, 21 yards on three targets) but has had at least nine targets in three of five games. He's tied for the team lead with 22 percent of the Bills target share. Somebody much more widely available is his teammate Duke Williams. Williams is an interesting story who came over from the Canadian Football League but the Bills clearly liked him enough to trade away former second-round pick Zay Jones. Just before the bye, Williams played 78 percent of snaps with four receptions and a touchdown against the Titans.

Moving over to Dante Pettis, it's hard to trust 49ers wide receivers because they run the ball so effectively and when they pass, it's usually to George Kittle. However, Pettis played a season-high 72 percent of the 49ers' snaps in Week 6, catching three passes for 45 yards. The reason I want to like Pettis in Week 7 is he's facing the Washington Redskins, a secondary that is allowing the third-most fantasy points to wide receivers this season. If there was ever a week for Pettis to get it done, it's this one.

In deeper leagues, you can target Demaryius Thomas, Tavon Austin, and N'Keal Harry. Before I jump into Thomas, check and make sure Robby Anderson and Jamison Crowder are owned. The entire Jets offense gets a huge boost for fantasy football with Darnold back under center. Over the past two weeks, Demaryius Thomas is second in snap-percentage among Jets wide receivers (79 percent) and first in target share (25 percent). With Darnold back in Week 6, Thomas had four receptions for 62 yards. Again, we don't want to trust him against the Patriots in Week 7, but the schedule gets a lot better after that. When it comes to Tavon Austin, the Dallas Cowboys are just dealing with so many injuries. Amari Cooper has a quad issue while Randall Cobb has a back injury. Austin stepped up in Week 6, playing 76 snaps with 48 of those coming in the slot. If Cooper or Cobb are out (or limited), Austin has a nice matchup against the Eagles, who just allowed four touchdowns to Stefon Diggs and Adam Thielen combined. N'Keal Harry was the first-round pick of the Patriots this year but hasn't played because he's on injured reserve with an ankle injury. He's expected to practice this week and is eligible to return in Week 9, making him a fine stash candidate.

Hunter Henry is more than likely owned in your league but on the off-chance somebody dropped him while he was hurt and forgot about him, make sure to jump on that. Henry just had one of the best games of his career in Week 6, leading the Chargers with eight receptions for 100 yards and two touchdowns. Fantasy owners everywhere were excited to get Chris Herndon back from suspension in Week 6 just to find out he has a hamstring injury. Well, many owners may have dropped him and you should take advantage of that. The Jets have had Ryan Griffin playing a lot and running a bunch of routes, a role that Herndon should step into. It's amazing that on a team with DeAndre Hopkins and Will Fuller, it was Darren Fells who led the Texans in receiving in Week 6. He finished with six catches for 69 yards and is a top 10 tight end over the past two weeks. He'll face the Colts in Week 7, a defense allowing the third-most fantasy points to tight ends.

If you're looking for streaming defenses, look no further. The top adds for Week 7 will be the Bills (vs. MIA), the 49ers (at WAS), and the Chiefs (at DEN).