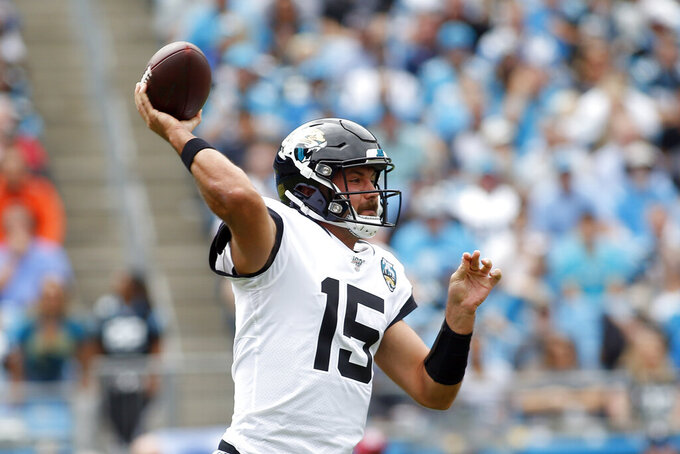 This is the time of year when the best fantasy owners are separated from the rest.

We're entering the busier bye weeks with four teams off in Week 6 (Bills, Bears, Colts, Raiders). This is where you have to hit on your waiver wire adds and pay close attention to the matchups. We have five weeks of data, which is a decent amount when it comes to figuring out opposing defenses.

Gardner Minshew vs. NO

In deeper leagues, you might be looking for a Josh Allen or Jacoby Brissett replacement this week as those guys are on bye. Maybe you have a QB with a tougher matchup such as Aaron Rodgers (vs. DET) or Daniel Jones (at NE) in Week 6. Nonetheless, Gardner Minshew and Kirk Cousins are the two QBs to stream this upcoming week. Let's start with the Minshew mustache who has developed a cult following among Jaguars fans. Minshew has been consistent, throwing multiple touchdowns in four of five games, attempting 30-plus passes in four straight. He can also make plays with his legs, too, evidenced by his 25 rushing yards per game. Only three quarterbacks have scored 16-plus fantasy points in every game this season: Pat Mahomes, Kyler Murray, and Minshew. The Jags will host the Saints in Week 6, a defense that has allowed the second-most fantasy points to opposing quarterbacks this season. If you want to pivot off Minshew or he's owned already, Kirk Cousins and the Vikings are hosting the Eagles in Week 6. Outside of Luke Falk, the Eagles have allowed 331 passing yards per game and the fifth-most fantasy points to quarterbacks this season. We know the Vikings want to run, but that will be a tough task against this Eagles defense that's allowing just 2.81 yards per carry to running backs this season. As a result, Cousins and the passing game will be asked to do more in this matchup.

Even deeper than that, Kyle Allen is facing off against the Tampa Bay Bucs in London in Week 6. We know the Panthers want to feed Christian McCaffrey, but the Bucs defense has actually been stout against the run. Conversely, the Bucs pass defense has not had the same success. They've allowed at least 314 passing yards in four straight games, including four passing touchdowns to Teddy Bridgewater in Week 5. Allen has the options to make plays in DJ Moore and Curtis Samuel and I look for them to do exactly that against this Bucs defense. If you owned Mason Rudolph in superflex leagues, you're going to need Devlin Hodges as Rudolph is in concussion protocol. Hodges came in in relief in Week 5, completing 6 of 9 passes for 68 yards (7.6 yards per attempt). This is nothing more than a desperation add in superflex leagues if you lost Rudolph.

Kenyan Drake vs. WAS

It's not often we advocate adding players from the Miami Dolphins and Washington Redskins but there were no major injuries in Week 5, which means we have to turn to matchups. Let's start with Kenyan Drake, a bright spot in a murky situation. Drake is in a committee with Kalen Ballage but the truth is he shouldn't be. While it's still not great, Drake is averaging 3.6 yards per carry compared to Kalen Ballage's 1.5. Coming off the bye, I expect the Dolphins to turn it over to Drake a bit more, which could add to his 15 percent target share. Drake and the Dolphins host the Redskins in Week 6, a defense that just allowed 237 total yards, 10 receptions, and two touchdowns to Patriots running backs. The Dolphins are clearly not the Pats, but this Washington defense is not a good one. On the other side of the field, we could see a heavy dose of Adrian Peterson with interim head coach Bill Callahan taking over. Callahan is known for working with offensive lines and has already said he wants to "establish the run". Given Washington's quarterback situation, it's not the worst idea. Peterson faces the Dolphins, who are allowing 4.77 yards per carry to running backs this season and the seventh-most fantasy points to the position. Both Drake and AP are flex options in Week 6.

Digging a bit deeper, we have some speculative handcuffs to targets as adds. Kareem Hunt is serving an eight-game suspension, which means he'll return in Week 10 (the Browns have a bye in Week 7). While we're still a month away, now is the time to add Hunt, especially if you're a Nick Chubb owner. Nobody knows how much Hunt will be used but if anything were to happen to Chubb, Hunt instantly becomes a top-12 running back. David Johnson battled through a back injury in Week 5, and does have a history of wrist injuries as well. His backup is Chase Edmonds, who has looked good in short bursts. While the Cardinals offense hasn't been great, they run a ton of plays, which means more volume for their running backs. If something were to happen to Johnson, Edmonds would become an RB2. Last but not least is Jon Hilliman, the third-string running back for the New York Giants. Wayne Gallman is in concussion protocol, Saquon Barkley is still tending to his ankle injury and the Giants play the Pats on a short week. Saquon might return but if he doesn't, Hilliman is a low-end RB3 or flex.

Dede Westbrook vs. NO

There are a lot of intriguing options at wide receiver this week. Maybe there isn't a star in the making but a good amount of depth options. Let's start with Auden Tate who had three receptions for 26 yards and a touchdown in Week 5 against the Cardinals. Over the past three weeks, Tate has had at least six targets in each, accounting for 20 percent of the Bengals target share during that span. With John Ross on injured reserve and A.J. Green already ruled out for Week 6, Tate makes for a low-end WR3 against the Baltimore Ravens. Maybe Dede Westbrook hasn't had the breakout season we were hoping for, but he's actually been consistent in PPR formats. He's had at least five receptions in four of the Jaguars games and just had seven catches for 82 yards in Week 5 against the stout Carolina Panthers defense. While DJ Chark is dominating in the touchdown department, both he and Westbrook have seen 37 targets each for the Jaguars this season. They face the Saints in Week 6, which is a plus matchup for Westbrook who will be matched up with P.J. Williams.

Normally, friends don't let friends add Miami Dolphins but this matchup against Washington is just too tasty in Week 6. That means DeVante Parker and Preston Williams should come into play here. Last time we saw Parker in Week 4, he had four receptions for 70 yards and a touchdown. Parker has accounted for 18 percent of the Dolphins targets this season and a whopping 35 percent of their air yards.

On the other hand, Williams has been working with the backups since preseason, which means he already has a better rapport with Josh Rosen. Williams has 19 targets in Rosen's first two starts with the Dolphins and Washington is a great matchup as they're allowing the second-most fantasy points to wide receivers this season. With the Dolphins likely playing from behind, look at Parker and Williams as bye-week replacements. If you play in deeper leagues, take a look at Byron Pringle of the Chiefs, Darius Slayton of the Giants, and Duke Williams of the Bills. Pringle just had six catches for 103 yards and a touchdown against the Colts and Sammy Watkins is tending to a hamstring injury. Slayton had four catches for 62 yards and a touchdown against the Vikings and Sterling Shepard is in the concussion protocol. Who is Duke Williams? Well, he just had four catches for 29 yards and a touchdown and the Bills traded Zay Jones to the Oakland Raiders. Williams was a dominant receiver in the Canadian Football League and will have a starting job now that Jones is gone.

Gerald Everett has become a key part of the Rams' offense over the past two weeks. During that span, he's seen 19 targets, finishing as the TE5 in Week 4 and TE1 in Week 5. He's coming off a big game against the Seahawks, with seven catches for 136 yards on 11 targets. Even with Tyler Higbee back in Week 5, Everett played 81 percent of the snaps and ran 37 routes compared to just 14 for Higbee. With Brandin Cooks in concussion protocol, Everett is a top-12 tight end heading into Week 6. If you're real desperate or have Darren Waller on a bye, Darren Fells and the Texans travel to face the Chiefs, a game with a 55-point total as of now, the highest on the Week 6 slate. Fells only had two targets and two receptions in Week 5, but both of them went for touchdowns.

If you're looking for streaming defenses, look no further. The top adds for Week 6 will be the Cowboys (at NYJ), the Redskins (at MIA), and the Ravens (vs. CIN).