FANTASY PLAYS: Players to start and sit for NFL Week 10 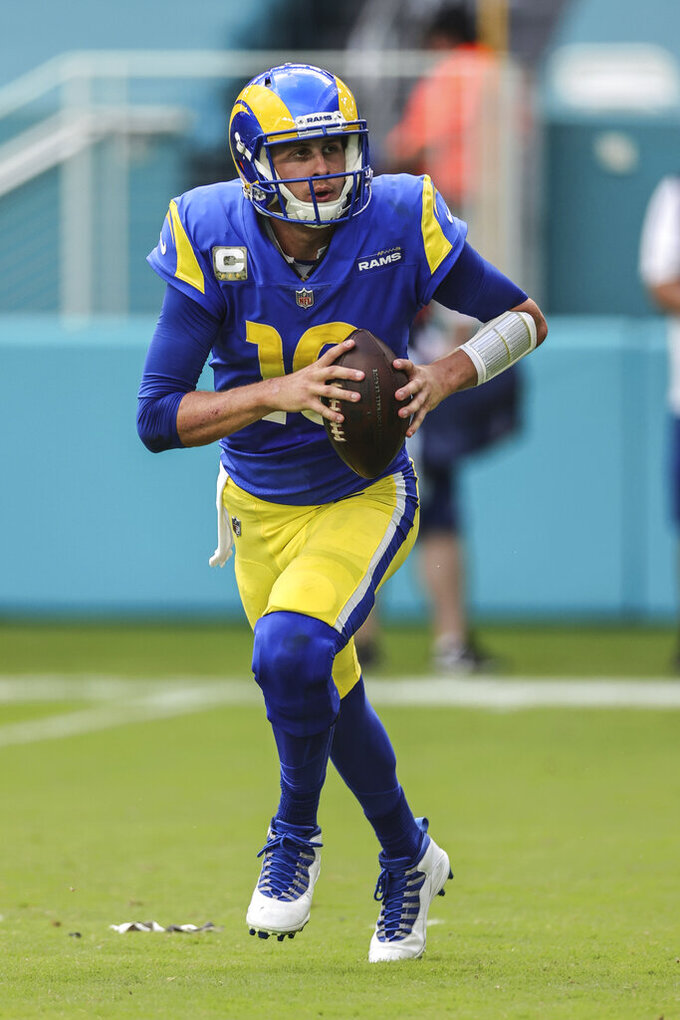 Week 10 begins the final push toward the fantasy playoffs in most leagues, so logic is abandoned for teams in search of late-season magic.

Levels of risk/reward increase as finding the right lineup becomes a task that goes down to the final minutes of Sunday’s kickoffs.

Fantasy owners entering the week in good shape need not take a rest. This should be the week of hammering down a fantasy postseason spot, especially if fantasy owners stack up Rams and Eagles players for what should be bountiful matchups.

START: Jared Goff, QB, Rams: Goff has been sluggish all season but has the best matchup among any Week 10 passer when he and the Rams meet a Seahawks defense that is second-worst in fantasy points per game allowed to opposing passers. Goff, who threw for 355 yards in Week 8, could possibly exceed that total considering Seattle allows the most air yards in the league (1,892).

SIT: Cam Newton, QB, Patriots: The upside of Newton rushing for a touchdown is far offset by the fact he has not thrown a touchdown pass in four straight games. Don’t count on Newton finding his groove this week against a Ravens defense that will come after him relentlessly. Baltimore has the second-highest blitz rate (42.6%) and has allowed just 10 touchdown passes, tied for second fewest in the league.

START: Gus Edwards, RB, Ravens: Edwards and rookie RB J.K. Dobbins will likely continue sharing the workload in place of injured Mark Ingram (ankle), but it’s Edwards who has the higher fantasy upside. Edwards has scored rushing touchdowns in three straight games and has a strong chance to continue his streak against the Patriots, who rank 25th in rushing yards allowed per game.

SIT: David Montgomery, RB, Bears: Even if Montgomery clears concussion protocol, his limited production despite a heavy workload isn’t playing well in fantasy leagues. Montgomery has just one rushing touchdown this season and has crossed the 70-yard barrier just twice, numbers that don’t appear likely to improve on Monday night versus a Vikings defense that allows a mere 4.2 yards per carry and a league-low five rushing touchdowns.

START: Will Fuller, WR, Texans: Fuller and QB Deshaun Watson have been a winner as they have connected on scoring tosses in six straight games. Fuller is 10th among receivers in yards before catch and will get his share of deep shots at the expense of the Browns pass defense, which ranks 29th in fantasy points allowed per game to opposing wideouts.

SIT: Corey Davis, WR, Titans: After catching a combined 14 passes for 163 yards and two touchdowns the previous two weeks, Davis burned fantasy owners with no catches in the Week 9 win against the Bears. The matchup doesn’t get better for him on Thursday when Tennessee must contend with a stingy Indianapolis pass defense that allows the third-fewest passing yards in the league.

START: Eric Ebron, TE, Steelers: Ebron has found the end zone each of the past two games and should feast regardless of who plays quarterback (Mason Rudolph if Ben Roethlisberger can't because of COVID-19) against a Bengals defense that is last in fantasy points per game allowed to opposing TEs.

SIT: Hunter Henry, TE, Chargers: A strong start to the season is now a distant memory for Henry, who hasn’t crossed the 50-yard barrier since Week 3 and has just one touchdown. Henry is often an afterthought in Los Angeles’ up-tempo passing attack. Henry’s cause is hurt further by the fact the Dolphins are seventh in fewest fantasy points per game allowed to opposing tight ends.

START: Robert Woods, WR, Rams: It stands to reason that if QB Jared Goff will feast on the Seahawks’ secondary, Woods will be a huge beneficiary. Woods has scored touchdowns in four of his past six games and could be in line for his first 100-yard receiving effort since Week 1 when he takes on Seattle’s fantasy-friendly defense.

SIT: David Johnson, RB, Texans: Johnson is in concussion protocol and would need to pass in order to play at the Browns on Sunday. Considering that Houston will look to take advantage of Cleveland’s shoddy pass defense (17 touchdown passes allowed) and that backup RB Duke Johnson was solid in the Week 9 win over the Jaguars, it’s best to let David Johnson remain on fantasy benches.

START: Carson Wentz, QB, Eagles: RB Miles Sanders (ankle) and WR Alshon Jeffery (foot) return to the Philadelphia lineup, giving Wentz two big playmakers to use against a Giants defense that he handled for 375 total yards and three scores in Week 7. Add WRs Travis Fulgham and Jalen Reagor to the mix, and Wentz could be a Week 10 fantasy monster.

SIT: Justin Jefferson, WR, Vikings: RB Dalvin Cook is the hottest player in fantasy football, yet it has come at the expense of Jefferson, who has just six catches for 90 yards on eight targets the past two weeks. Don’t bank on Jefferson providing a Monday Night miracle for fantasy teams, not against a Bears defense that allows the third-fewest fantasy points per game to opposing wide receivers.

START: James Robinson, RB, Jaguars: One of the few fantasy constants at RB this season, count on the Jaguars getting the ball in his hands against a Packers defense that is second-worst in fantasy points per game allowed to opposing RBs. Robinson is a likely bet to provide more than 100 yards from scrimmage and will be involved regardless if the game gets out of hand for Jacksonville.