FANTASY PLAYS: Players to start and sit for NFL Week 11 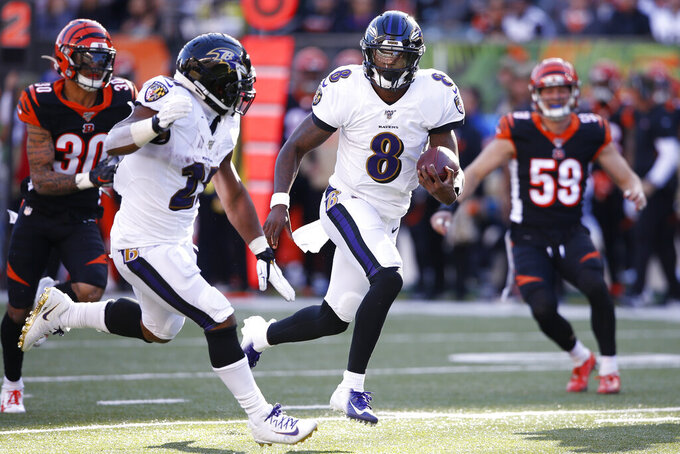 Baltimore Ravens quarterback Lamar Jackson (8) runs the ball for a touchdown during the second half of NFL football game against the Cincinnati Bengals, Sunday, Nov. 10, 2019, in Cincinnati. (AP Photo/Gary Landers)

With a considerable number of leagues less than a month away from beginning their postseasons, Week 11 is a make-or-break for fantasy teams.

Teams lacking the likes of Saquon Barkley, Derrick Henry, Aaron Rodgers and Russell Wilson will have to resort to Plan B as the quartet of fantasy heavy hitters will be on byes.

Don’t expect the weather to be a factor in most places. The massive Arctic blast that hit the nation this week will have lost its grip well ahead of Sunday’s main schedule of games.

START: Lamar Jackson, QB, Ravens: Newsflash: Jackson’s become a must-start play on a weekly basis. The dual-threat gets a Texans defense without J.J. Watt and one that is the sixth-worst in fantasy football against opposing quarterbacks. He has not thrown an interception since Week 6.

SIT: Carson Wentz, QB, Eagles: The Patriots allow fewer than 10 fantasy points per game to opposing quarterbacks, and without a viable deep threat to stretch the New England secondary, fantasy owners are on a fool’s errand by starting Wentz. He hasn’t been effective for his owners, as Wentz has had five games of throwing just one touchdown in his past six.

START: Josh Jacobs, RB, Raiders: Oakland’s rookie back has hit his stride, recording at least 71 rushing yards in five of his past six, including three 100-yard games. The good times should continue to roll at the expense of a winless Bengals team that is the third-worst in fantasy defense against opposing running backs.

SIT: Sonny Michel, RB, Patriots: A disappointing season isn’t going to get better for Michel, who has to square up against an Eagles defense that is fourth overall against the run and sixth in fewest yards per carry (3.8). Michel has managed a total of 144 yards on 34 carries (3.04 yards per attempt) in the past three weeks and would need a host of goal-line opportunities to justify having him in the lineup.

START: D.J. Moore, WR, Panthers: He’s still stuck on just one touchdown this season, but Moore has rattled off consecutive 100-yard outings and gets a home matchup against a Falcons defense that has allowed the sixth-most fantasy points to opposing wide receivers. Atlanta also allows the fourth-highest completion rate in the league, making Moore an even better option in PPR formats considering he’s been targeted 21 times the past two games.

SIT: DeVante Parker, WR, Dolphins: Despite scoring in three of his past five games, Parker has yet to exceed 75 receiving yards in a game this season. Don’t count on that streak to end against a Bills defense that has allowed the third-fewest passing yards in the league while allowing only seven touchdown passes.

START: Jared Cook, TE, Saints: Only the Cardinals are worse against opposing tight ends in fantasy than the Buccaneers. Cook has seen 25 of his 37 total targets in his past four games, including a season-best 10 in last week’s loss against the Falcons. Tampa Bay’s 22 touchdown passes allowed is the third-highest in the league and there’s little chance the New Orleans offense will struggle in consecutive weeks.

SIT: T.J. Hockenson, Lions: Hockenson’s fantasy owners are still waiting for him to duplicate his Week 1 production. Since he had six catches for 131 yards and a touchdown against the Cardinals, the rookie has a combined 19 catches for 212 yards and a touchdown that isn’t likely to get better if Matthew Stafford remains sidelined. Even against a Cowboys defense that has allowed the fourth-most fantasy points to opposing tight ends, Hockenson is bench-worthy.

START: Joe Mixon, RB, Bengals: This is not a typo. Mixon had a season-high 32 touches for a season-best 151 yards from scrimmage last week. He gets a solid matchup against the Raiders, who are second only to Cincinnati with 6.1 yards allowed per play. In what could be a high-scoring matchup involving two poor defenses, a heavy dose of Mixon could pay off huge.

SIT: Kyler Murray, QB, Cardinals: Coming off the best fantasy effort of his rookie season, Murray faces a 49ers defense that has allowed the fewest passing yards in the league. Although he put up 244 yards and two scores against San Francisco in Week 9, don’t make the mistake and bet on Murray exceeding expectations.

START: Dak Prescott, QB, Cowboys: Prescott has consecutive games of three touchdown passes and faces a Lions defense that is the seventh-most fantasy friendly to opposing quarterbacks. Look for Prescott to connect consistently against a Detroit D that is second only to the Raiders in depth of target (10.0).

SIT: Kenny Stills, WR, Texans: While the Ravens have given up yards in the air, they have allowed only nine touchdown passes this season. Stills hasn’t scored since Week 1 and could find himself struggling to fill the void of Will Fuller, whose status remains in question.

START: John Brown, WR, Bills: Brown has been on the verge of a big outing for weeks. That could become reality as he gets a chance to exploit a Dolphins defense that has allowed the fourth-most touchdown passes (20) and the third-highest depth of target (9.7).

SIT: David Montgomery, RB, Bears: After a two-game breakout, Montgomery struggled in last week’s win over the Lions. He’ll face a Rams defense that has been a lockdown unit against the run, allowing the second-fewest yards per carry (3.3) while also giving up the sixth-fewest yards on the ground.

START: Gerald Everett, TE, Rams: Everett has become a vital part of Los Angeles’ passing game, with three games of at least 10 targets in his past five games. The targets will be available against the Bears' defense that has conceded the sixth-most fantasy points to opposing tight ends.

SIT: Baker Mayfield, QB, Browns: He finally threw multiple touchdown passes in last week’s win over the Bills. Don’t consider it an upward trend as he takes on a Steelers defense that has allowed the 10th-fewest passing yards while also grabbing 14 interceptions, the second-best total in the league.