FANTASY PLAYS: Players to start and sit for NFL Week 12 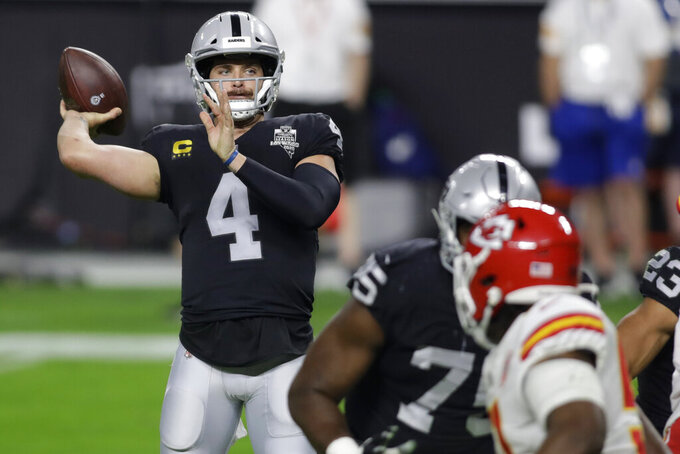 Two weeks remain in the fantasy regular season, making Week 12 an all-or-nothing proposition for owners scratching and clawing their way into the playoffs.

The good news is that there are no bye weeks, giving owners an unlimited landscape to work with. On the other side of the spectrum is the reality some will face if failure during the Thanksgiving Day games fails to offer a needed springboard.

START: Derek Carr, QB, Raiders: Easily the best streaming option at the position, Carr is in line to have a big Sunday at the expense of a Falcons defense which remains the most fantasy friendly unit against opposing quarterbacks. Only the Seahawks have allowed more passing yards than Atlanta, which also ranks tied for 30th with 22 touchdown passes allowed.

SIT: Kirk Cousins, QB, Vikings: Cousins may be without WR Adam Thielen — the league leader with 11 touchdown receptions — expect the Minnesota offense to be heavily run-focused against the Panthers, who rank 27th in fantasy points per game allowed to opposing running backs. That means a hefty dose of RB Dalvin Cook, so don’t look to Cousins to continue a hot streak that’s seen him throw for eight touchdowns in the past three games.

START: David Montgomery, RB, Bears: Week 12 may be the opportunity for Montgomery to reward his frustrated owners. Scheduled to return off concussion protocol, Montgomery gets a favorable matchup on Sunday night when he runs against a Packers defense that is third worst in fantasy points per game allowed to opposing RBs and has allowed an opposing back to rush for at least 90 yards in four of their past six games.

SIT: Ronald Jones, RB, Buccaneers: Outside of his huge Week 10 performance against the Panthers, Jones has been a fantasy disappointment, having rushed for 34 or fewer yards in four of his past five games. Don’t count on the good times to suddenly return as Jones and the slumping Buccaneers run headlong into a Chiefs run defense that is less fantasy friendly to opposing runners over the past month than they were earlier in the season.

START: Jalen Reagor, WR, Eagles: There’s risk here, especially with the inconsistency of QB Carson Wentz, but Reagor is the one Philadelphia wideout most capable of exploiting the matchup against a Seattle defense that continues to allow the most fantasy points per game to opposing receivers. Fantasy owners willing to take a gamble could find themselves striking gold Monday night.

SIT: Jakobi Meyers, WR, Patriots: Meyers’ reign atop the New England WR pecking order was brief as N’Keal Harry and a solid Week 11 outing from Damiere Byrd resulted in him being an afterthought. His chances for a Week 12 rebound are slim despite playing against a Cardinals defense that has allowed the seventh-most fantasy points per game to opposing wideouts. Adding to Meyers’ woes: he’ll likely be shadowed by All-Pro CB Patrick Peterson.

START: Dawson Knox, TE, Bills: Why take a chance on a TE that has been injured all season and has just 16 total targets? Simple: Knox has a very favorable matchup as the Bills meet a Chargers defense that has allowed at least one touchdown pass in four straight games to opposing tight ends. With much of the focus going toward slowing down WR Stefon Diggs, Knox should emerge as a stealth option, especially as Buffalo gets inside the red zone.

SIT: Robert Tonyan, TE, Packers: Tonyan scored for the first time since his three-TD performance in Week 4, but remains an afterthought in the Green Bay offense, having been targeted just 10 times in the past three games. The Bears are the ninth-worst fantasy defense against opposing TEs, but have yet to allow one to eclipse 65 yards in a game this season, a feat Tonyan has achieved just twice in 2020.

START: Michael Pittman, Jr., WR, Colts: The rookie has pulled in 14 of his 18 targets for 223 yards and a touchdown over the past three games, slowly emerging as the go-to option for QB Philip Rivers. Pittman has an excellent opportunity to continue evolving into a fantasy threat when he lines up against a Titans defense ranked 28th in fantasy points allowed per game to opposing WRs along with being tied for 28th with 21 touchdown passes allowed.

SIT: Tom Brady, QB, Buccaneers: This is not the week to gamble with Brady, who takes on a Chiefs defense that allows the 10th-fewest fantasy points per game to opposing quarterbacks. The fact that Brady has not completed a pass attempt of better than 20 yards (0 for 19) over the past month is also unnerving to fantasy owners who rely on Tampa Bay wideouts Mike Evans and Chris Godwin.

START: Nick Chubb, RB, Browns: Back-to-back 100-yard games since his four-game absence is a clear sign Chubb has re-established himself as a must-start runner. A third straight 100-yard game is in the offing when Chubb and Cleveland’s power running attack gets to feast on a Jaguars run defense that gives up the ninth-most rushing yards per game. Even better for Chubb’s fantasy owners is the fact Jacksonville is the fifth worst in fantasy points allowed per game to opposing RBs.

SIT: Anthony Miller, WR, Bears: The targets are there (26 in the past three games), but the production has fallen short for Miller’s owners, who have yet to see him score a touchdown since Week 3. Miller hasn’t had a 100-yard game this season and it’s unlikely he’ll do so Sunday night against a Packers defense that gives up the ninth-fewest fantasy points per game to opposing wideouts.

START: Cooper Kupp, WR, Rams: Targeted a whopping 40 times over the past three games, Kupp will remain the hot hand in the Los Angeles passing game when the Rams take on a 49ers team that held Kupp to just 11 yards and three receptions in Week 6. Don’t bank on a repeat performance now that the Rams appear to have opened up their passing game.

SIT: Matt Ryan, QB, Falcons: Ryan has either thrown just one touchdown pass or failed to do so five times this season, including three of his past four. With WR Julio Jones (hamstring) possibly missing the game, fantasy owners should look elsewhere for better production at the position.