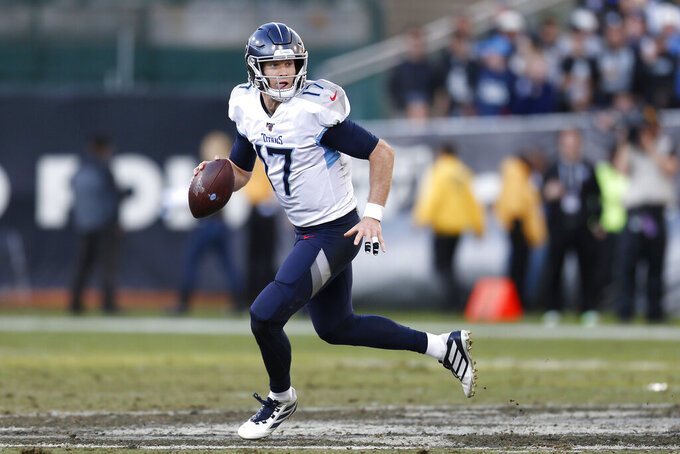 Tennessee Titans quarterback Ryan Tannehill (17) rolls out to pass against the Oakland Raiders during the second half of an NFL football game in Oakland, Calif., Sunday, Dec. 8, 2019. (AP Photo/D. Ross Cameron)

Congrats to those who have reason to read this, for you have made it to Week 15.

That means semifinal week in most leagues in a week filled with (actual) games with (actual) playoff bearing, a sense of anything being possible fills the air.

However, that doesn’t mean tweaking lineups is out of the question, as several under-the-radar performers are in position to deliver in a big way.

START: Ryan Tannehill, QB, Titans: Over the past four weeks, Tannehill has a 9:1 TD:INT margin and is fifth overall in average intended yards per pass attempt. Those numbers look swell against a Texans defense that has allowed 13 completions of better than 20 yards over the past two games and is also the fourth-most fantasy friendly defense to quarterbacks.

SIT: Matt Ryan, QB, Falcons: Signs of vintage Matty Ice have been seen over the past two weeks, but Ryan will be without WR Calvin Ridley (injured reserve) on the road against a 49ers defense that allows the fewest passing yards in the league that also happens to be third in the league with 45 sacks.

START: Phillip Lindsay, RB, Broncos: While his numbers haven’t been eye-opening of late, Lindsay has established himself as the lead back in Denver, whose offense has found new life with rookie QB Drew Lock. Lindsay has a chance to be one of the fantasy under-the-radar standouts in what will be a solid matchup against the Chiefs, who give up the second-most fantasy points to running backs.

SIT: Sonny Michel, RB, Patriots: Michel is potential Fool’s Gold. Yes, the Pats get a chance to run at will against the Bengals, who allow nearly 157 yards per game on the ground, but Michel hasn’t scored a touchdown since Week 7, offers little in the passing game and has surpassed 45 rushing yards just once in the past five games. If those aren’t enough caution signs, then, well ...

START: Darius Slayton, WR, Giants: The rookie has emerged as a legitimate playmaker, who has averaged 9.5 targets over the past four games while amassing 386 yards and four touchdowns in the same span. With Eli Manning possibly set for another start, Slayton should be in line for a big game against a Dolphins pass defense that is 31st in TD passes allowed (31) and 29th in yards per catch allowed (12.6).

SIT: Will Fuller, WR, Texans: Fuller missed last week’s debacle against the Broncos and there’s no indication he’ll be going to go against the Titans. Even if he was, Fuller is too risky for his owners to commit to playing. Pivoting to either Kenny Stills or Keke Coutee isn’t a wise play, either.

START: Dallas Goedert, TE, Eagles: Injuries have ravaged the Eagles WR group, but it won’t stop Carson Wentz from throwing the ball at a significant rate. Goedert has had at least six targets in each of his past four games and could hit double digits even with the presence of Zach Ertz. He’s another of the under-the-radar performers who could carry fantasy teams, especially in PPR formats.

SIT: Jason Witten, TE, Cowboys: Witten is averaging a mere 8.6 yards per catch. Witten hasn’t exceeded 58 receiving yards in a single game this season, and it’s unlikely he tops that total in a key game against the Rams, who have the seventh-best fantasy defense against tight ends.

START: A.J. Brown, WR, Titans: Brown has done a great DeSean Jackson impersonation for fantasy owners over the past three games, catching 12 passes for 333 yards (27.7 yards per catch) and three touchdowns. There’s little question Tennessee QB Ryan Tannehill will look to dial it up against a suspect Texans pass defense that has allowed 28 touchdown passes this season, making Brown even more of a play for owners who also have Tannehill under center.

SIT: Aaron Rodgers, QB, Packers: Rodgers hasn’t thrown for more than 300 yards in a game since Week 8. The four-TD outburst against the Giants two weeks ago is more of an exception considering that Week 8 also marked the only other multiple-TD pass outing since Week 7. The Bears have the seventh-best fantasy defense against quarterbacks, which makes Rodgers a risky proposition.

START: Chris Carson, RB, Seahawks: Carson has five 100-yard games since Week 3 and has failed to surpass at least 76 yards in the same span. The potential for a big Week 15 lies ahead for Carson, who faces a Panthers defense that has allowed a league-high 24 rushing touchdowns along with a league-worst 5.3 yards per carry.

SIT: Joe Mixon, RB, Bengals: Coming off a season-best 146 yards against the Browns, Mixon’s second-half revival will hit the wall that is the Patriots defense, which has allowed the fewest fantasy points to running backs. New England has given up just six rushing touchdowns this season, making it unlikely that Mixon will extend his two-game streak of rushing scores.

START: Jameis Winston, QB, Buccaneers: The risk of interceptions exists, but Winston has ripped off seven 300-yard games over his past eight starts, including a pair of 400-yard efforts. Winston also has five games of multiple TD passes in his past seven games and makes for a strong QB option against a Lions defense that is 30th in passing yards allowed while also giving up 26 scoring tosses.

SIT: Larry Fitzgerald, WR, Cardinals: Fitzgerald has failed to average more than 10 yards per reception in six of his past seven games. Fitzgerald has only one touchdown reception since Week 3 and is a rough matchup against a Browns defense that ranks eighth in the league in fewest passing yards allowed. ___