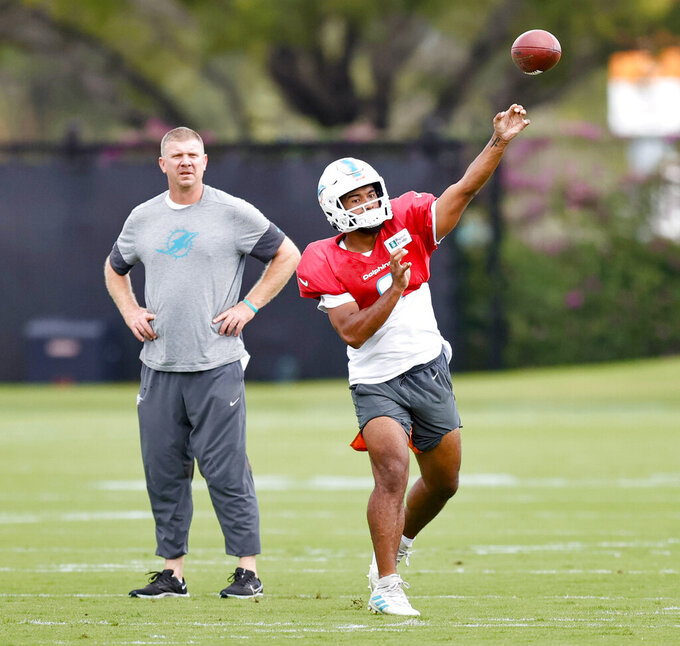 Tua Tagovailoa draws a top-level streaming matchup against the New York Jets, who are 32nd in numberFire’s adjusted pass defense metrics. Tagovailoa had 273 yards and two touchdowns against them in a Week 11 matchup. He has had only two other full games against bottom-10 adjusted pass defenses. Across that full three-game sample, Tua has averaged 297.7 yards and 2.7 touchdowns with elite efficiency.

I don’t agree with how high Cam Newton is in the simulations. He has been benched at times in favor of P.J. Walker and now faces the NFL’s second-ranked adjusted pass defense. If taking a chance on a tough pass defense and a run-first quarterback, give me Taysom Hill against the Tampa Bay Buccaneers (sixth in adjusted pass defense).

We continue to see Russell Wilson’s underlying efficiency improve. He ranks top 10 in expected completion rate over his past three games while posting expectation-level passing efficiency.

— If Lamar Jackson starts, you can start him even though the efficiency has waned. He’d rate out as a high-end Tier 2 play.

Sony Michel has played 97.0% and 100.0% of the Los Angeles Rams’ snaps the past two games and has become a feature back in the offense.

Melvin Gordon and Javonte Williams remain a potent 1-2 combo for the Denver Broncos. They played identical 49.2% snap rates in Week 14. Gordon, last week, had 24 carries and no targets while Williams had “just” 15 carries with both of the running back targets. Each found the end zone twice. The offense runs through them, so both remain RB2 plays.

Devonta Freeman maintained his feature-back role in Week 14. He now has a snap rate of 68.1% and 66.7% in the past two games, respectively, marking the two highest single-game rates for the team all season.

A lot of backfield ambiguity clouds the mid-week projections. It’ll be vital to track our actual projections throughout the week and weekend to adjust for changes.

Since a Week 8 bye, Hunter Renfrow leads the Las Vegas Raiders with a 24.5% target share, an elite mark that is tied to a lowly 5.7-yard average depth of target, but comes with leverage in the red zone (a 34.5% red zone target share). It’s hard to find many roles better than that.

It’s been a while since we have seen Michael Pittman have a breakout game, but he remains the go-to option for the Indianapolis Colts. In five games leading into their bye, Pittman had accrued a 23.3% target share, and against a New England Patriots team that could key in on limiting Jonathan Taylor, Pittman sets up well for a solid fantasy outing.

Christian Kirk and the rest of the Cardinals' pass catchers face an elite matchup against the Detroit Lions, who rank 31st in adjusted pass defense at numberFire. They are also 31st in passing average depth of target allowed, 32nd in yards per target on downfield attempts, and 31st in pressure rate generated. Everything sets up well for Kyler Murray and the Cardinals to have a big game.

Brandon Aiyuk’s resurgence puts him into great position for fantasy points against the Atlanta Falcons, who rank 30th in adjusted fantasy points per target allowed to receivers. Aiyuk has been targeted on 24.7% of the San Francisco 49ers’ passes since George Kittle returned in Week 9. Aiyuk also leads the team in that span with 1.8 downfield targets per game and still has a 17.4% red zone target share in this split.

Bench if possible: These players finished as a WR2 or better under 35% of the time.

Start with confidence: You’re playing them.

We should anticipate a volume bump for Zach Ertz this week. The Lions rank 18th in adjusted fantasy points per target allowed to opposing tight ends, which is just a middling matchup. But the Cardinals’ elite implied total (a week-best 29.75) gives Ertz plenty of touchdown equity.

Mike Gesicki maintained a great role even with DeVante Parker back in Week 13 before the Miami Dolphins’ bye. He had 11 targets in that game (26.8%), tied for a team high with Jaylen Waddle. That also included a downfield target and two red zone targets for Gesicki.

An indirect beneficiary of Emmanuel Sanders’ injury is Dawson Knox. Knox has had at least an 83.3% snap rate in all five games since he returned from an injury and at least 90.3% in each of the past four. In that five-game sample, Knox (16.7%) trails only Stefon Diggs (27.6%) in target share on an elite offense, and he has averaged 1.0 downfield targets and 1.6 red zone targets per game.