FANTASY PLAYS: Players to start and sit for NFL Week 4 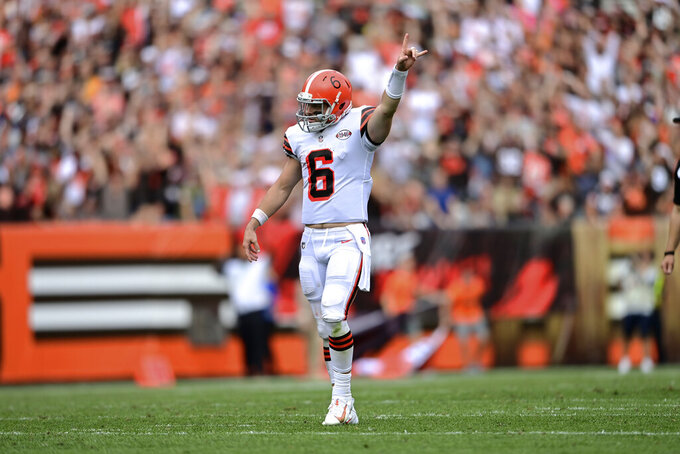 Cleveland Browns quarterback Baker Mayfield celebrates as running back Kareem Hunt scores a 29-yard touchdown during the second half of an NFL football game against the Chicago Bears, Sunday, Sept. 26, 2021, in Cleveland. (AP Photo/David Dermer)

Kirk Cousins plays a Cleveland Browns team that is just 16th in adjusted fantasy points per drop-back against quarterbacks and is playing in a dome, which is more conducive to big games. Since 2018, passers have gotten to the 300-yard mark 32% of the time when playing indoors compared to 24% when playing outdoors.

Baker Mayfield plays on the other side of that game, and he’s off to an efficient enough start for the matchup and game environment he’ll have against the Minnesota Vikings.

Consider if needed — This tier is sitting between 40% and 59% for an RB2 week, and you’re probably starting some of them even if they’re shy of that top tier.

A few injury notes here. Dalvin Cook is currently partially projected because of his uncertain status. If he plays, you play him. If he doesn’t you play Alexander Mattison if you have him. Cook has averaged 21.0 carries and 5.0 targets when healthy. Last week, Mattison took over that role with 26 carries and eight targets.

The same goes for Sony Michel and Darrell Henderson with partial projections. When Henderson has played, Michel has had a difficult time getting on the field. That may have changed after his 20-carry, four-target game while playing 73.0% of the Los Angeles Rams’ snaps.

If Henderson is healthy, we can trust him. If you’re really in a bind, Michel’s potentially increased workload could keep him in the low-end flex mix in such a promising game.

Keep an eye on the status of Giovani Bernard, who was the Tampa Bay Buccaneers’ lead back last week. He played 45.1% of the team’s snaps and had 10 targets with no carries. If he’s good to go, we should bump down Leonard Fournette.

Start with confidence: These guys are the Big Five now.