FANTASY PLAYS: Players to start and sit for NFL Week 7 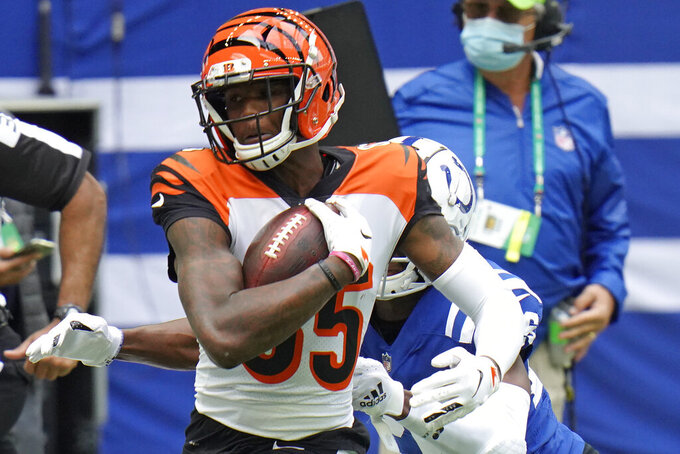 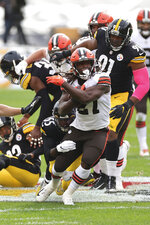 On the surface, Week 7 looks to be another quarterback-friendly week, beginning on Thursday with Carson Wentz and the Eagles taking on the Giants.

The week’s best QB pairing will be Matthew Stafford and the Lions visiting the Falcons, who look to be in high-end fantasy production mode with Matt Ryan getting WR Julio Jones back into the lineup.

This could be a good week for fantasy owners of Aaron Rodgers and Deshaun Watson, who square off in a potential high-scoring matchup beneficial to the wideouts of the Packers and Texans.

On the flip side, it might be best to limit usage of Rams players on Monday night as they take on a stingy Bears defense.

START: Kyler Murray, QB, Cardinals: Murray was still a top-five fantasy QB in Week 6 despite completing just 9 of 24 passes in Arizona’s Monday night rout of Dallas. His stats could be even better when the Cards host the Seahawks defense that allows the most passing yards (1,264) in the league while also giving up the third-most fantasy points per game to opposing QBs.

SIT: Drew Brees, QB, Saints: No longer a fantasy must-start, Brees must contend with the Panthers defense that allows the third-fewest fantasy points per game to opposing passers. Even if WR Michael Thomas returns to the lineup, keep in mind that Carolina has allowed just seven passing touchdowns and limits passers to an average depth of target of 6.9 yards, third lowest in the league.

START: Kareem Hunt, RB, Browns: He has yet to have a breakout effort since replacing the injured Nick Chubb. That will likely change when Hunt gets to plow through the Bengals run defense that allows opposing backs to average 5.1 yards per carry. Cincinnati is 28th in rushing yards allowed, another number that trends toward Hunt being a Week 7 standout.

SIT: Antonio Gibson, RB, Washington: The emergence of RB J.D. McKissic as a receiving specialist has cut into Gibson’s touches the past two weeks, which have seen him total a combined 57 yards on 20 carries. Counting on Gibson is too risky, even against a Cowboys defense that has allowed the second-most rushing yards in the NFL while giving up a league-high 10 touchdowns on the ground.

START: Tee Higgins, WR, Bengals: Only the Seahawks and Cowboys give up more fantasy points per game to opposing receivers, which means Higgins — who has averaged eight targets per game in his past four — gets an opportunity to further solidify his status as fellow rookie Joe Burrow’s top option. Higgins comes off the first 100-yard game of his brief career and is a solid bet to earn his second on Sunday.

SIT: Michael Gallup, WR, Cowboys: Rookie CeeDee Lamb has seemingly become the WR2 in Dallas. The numbers further illustrate the reality: Gallup has been held to fewer than 30 receiving yards in two of his past three games and is averaging just five targets per game in that span. Washington allows the sixth-fewest fantasy points per game to opposing wideouts, making the benching of Gallup an easy choice.

START: Jimmy Graham, TE, Bears: Having Nick Foles under center has led to a revival of sorts for Graham, who has been targeted 28 times in the past four games. Although the Rams are in the middle of the pack in fantasy points allowed per game to opposing TEs, they have allowed at least one touchdown in four straight games to the position, which makes Graham a sneaky good play for fantasy owners.

SIT: Evan Engram, TE, Giants: Engram has yet to reach the end zone this season and hasn’t exceeded 35 receiving yards since Week 2. The Eagles are good against the pass, as they allow just 10.6 yards per catch, seventh lowest in the league. At this point, it’s time to give up on Engram’s expected breakout season.

START: Chase Claypool, WR, Steelers: Claypool continues his rapid run toward WR1 status, having produced at least 74 receiving yards and accounting for five touchdowns over the past three games. Averaging 15.6 yards each time he touches the ball, Claypool could thrive against a Titans defense that has allowed 13 passing touchdowns thus far.

SIT: Jared Goff, QB, Rams: While Goff has thrown multiple touchdown passes in his past two games, he has also had about 200 yards in two of the past three games. It’s unlikely Goff wields any Monday night magic against a Bears defense that has given up the second-fewest fantasy points per game to opposing quarterbacks along with a league-low four touchdown tosses.

START: Justin Herbert, QB, Chargers: Look for the rookie to pick up where he left off before the Week 6 bye. Herbert averaged 298.7 passing yards per game in his first four starts while throwing seven touchdown passes in his past two. WR Keenan Allen (back) returns to the lineup, giving Hebert another playmaker against the Jaguars defense ranked 28th in passing yards allowed and 26th in air yards given up.

SIT: Devin Singletary, RB, Bills: Singletary has just one game of better than 70 rushing yards and has managed just 2.7 yards per carry in his past two outings. Even with the Jets giving up the fifth-most fantasy points per game to opposing running backs, the potential of Singletary breaking out is limited at best.

START: David Johnson, RB, Texans: The firing of coach/GM Bill O’Brien has benefited Johnson, who has seen his workload increase the past two games. He’ll remain a hot hand in PPR formats when he faces the Packers run defense that struggled against Ronald Jones in last week’s loss to the Buccaneers. Green Bay is the third-worst team in fantasy when it comes to stopping RBs, making Johnson a solid RB1 play.