FANTASY PLAYS: Players to start and sit for NFL Week 8 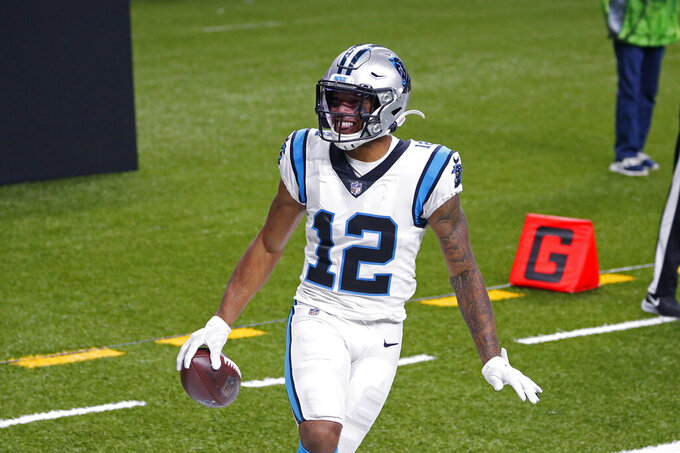 The midway point of fantasy football season has arrived.

Week 8 means there’s still hope for fantasy owners who have suffered from the injury bug and/or paid dearly for reaching on a “can’t miss” sleeper play.

On the flip side, a strong start doesn’t guarantee a postseason spot. Those atop their leagues must be reminded that fortunes can suddenly change.

That said, Week 8 has its share of matchups ready made for big fantasy performances, beginning with Thursday’s Falcons-Panthers matchup and the possible return of All-Pro running back Christian McCaffery and capped by Monday’s Buccaneers-Giants showdown.

Owners dealing with byes from the Cardinals, Jaguars, Texans and Washington Football team will have their share of streaming options to help fill the void.

START: Carson Wentz, QB, Eagles: He’s beginning to find his groove following a rough start, having thrown at least two touchdown passes in three straight games while adding touchdown runs in the past two. Wentz gets a good Sunday night matchup when he faces a Cowboys defense that has allowed 16 touchdown passes and 12.4 yards per reception, the latter number being the third highest in the league.

START: Kareem Hunt, RB, Browns: Hunt has yet to exceed 86 rushing yards in a game this season, but he does have a nose for the end zone with seven total touchdowns. He’s overdue for a big game and could finally deliver for his fantasy owners when he meets a Raiders defense that has allowed a league-high 12 rushing touchdowns along with being the third-worst defense when it comes to points allowed per game to opposing backs.

SIT: Mark Ingram, RB, Ravens: Ingram may return from his sprained ankle, but this is not the week to use him, as Baltimore must contend with Pittsburgh defense's that leads the league in both fewest rushing yards allowed and fewest fantasy points allowed per game to opposing running backs. Ingram owners are best off looking for a streamer rather than starting him.

START: DJ Moore, WR, Panthers: Moore has averaged 93 yards and added three touchdowns in his past three games. He’s a must start on Thursday against a Falcons defense last in both passing yards allowed (2,334) and touchdown passes allowed (19).

SIT: CeeDee Lamb, WR, Cowboys: The talented rookie comes off his worst game (zero catches on five targets) and will likely have rookie Ben DiNucci at quarterback when Dallas faces Philadelphia on Sunday night. The Eagles also allow the fifth-fewest yards per reception (10.5), further dampening the prospects of playing Lamb.

START: Jonnu Smith, TE, Titans: Smith should be past the ankle injury that limited him to two receptions on six targets the past two games. He’s a strong bet to return to form as he faces the Bengals defense that allows the second-highest fantasy points per game to opposing TEs. Keep in mind that Smith had been in double-digit fantasy points in three of his first four games before being injured, so have no qualms in playing him.

SIT: Hunter Henry, TE, Chargers: Despite averaging seven targets per game, Henry has just one touchdown and has been held under 40 receiving yards in his past three games. The Broncos allow the fifth-fewest passing yards in the league and have given up just two scoring passes to tight ends, meaning that Henry should remain on fantasy sidelines.

START: Brandon Aiyuk, WR, 49ers: The rookie had 115 yards on six of seven targets in the Week 7 rout of the Patriots and gets a more friendly matchup in the form of the Seahawks defense that allows the most fantasy points per game to opposing receivers. Aiyuk’s speed also plays well considering Seattle has allowed a league-high 1,460 passing yards.

SIT: Drew Brees, QB, Saints: Brees comes off his second-best fantasy outing of the season. Don’t count on a repeat since he faces a road trip to a Bears defense that allows the second-fewest fantasy points per game to opposing passers while limiting them to a league-low seven touchdown passes.

START: Jimmy Garoppolo, QB, 49ers: The Seahawks allow a whopping 374 passing yards per game, making the choice to use Garoppolo as a streaming option an almost sure thing. He has yet to put up a 300-yard game this season, a fact that should change in a big way.

SIT: DeeJay Dallas, RB, Seahawks: Injuries in the Seattle backfield leave Dallas, a rookie from Miami (Fla.), as the one healthy runner available. He’s not a streaming option worth considering as he will face the 49ers defense that allows the second-fewest fantasy points per game to opposing backs.

START: Jonathan Taylor, RB, Colts: The Colts come off a Week 7 bye and a refreshed Taylor returns to meet the Lions defense that gives up the fifth-most fantasy points per game to opposing running backs. Detroit has also given up nine rushing touchdowns, which plays well for Taylor, who ranks among the league-leaders in yards gained before contact.

SIT: Evan Engram, TE, Giants: Although Engram had a season-high nine targets in Week 7, Engram still failed to reach 50 yards receiving. The return of WR Sterling Shepard last week will likely lead to Engram’s targets dropping against the Buccaneers defense that has allowed the 10th-fewest fantasy points per game to opposing TEs.

START: Rashard Higgins, WR, Browns: The season-ending injury to WR Odell Beckham Jr. means Higgins becomes the best downfield threat among Cleveland’s wideouts. Higgins caught all six of his targets for 110 yards in Week 7 and gets a solid matchup against a Raiders defense that allows the 11th-most passing yards in the league.

SIT: Kirk Cousins, QB, Vikings: Cousins had his second-best fantasy outing of the season against the Packers in Week 1, but has thrown four interceptions in his past two games. He gets a rematch against the Green Bay defense that has played well despite ranking near the bottom of the league in pass rush, including one of the lowest blitz percentages (23.5%).