FANTASY PLAYS: Players to start and sit for NFL Week 9 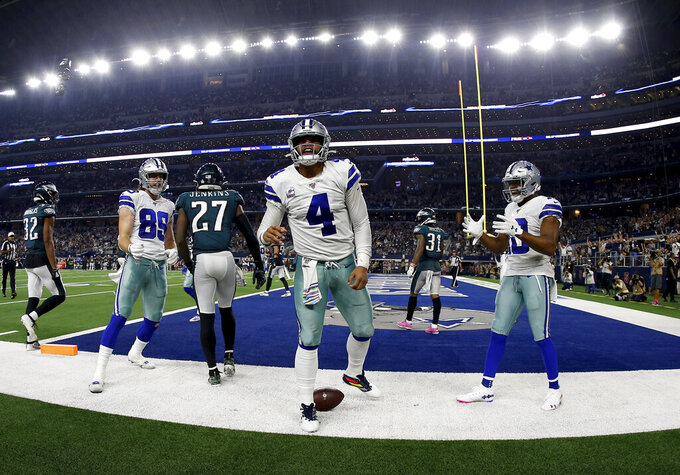 Week 9 of fantasy football brings a week of odd matchups at quarterback.

The schedule appears unfriendly to those looking for a can't-miss effort at the position. Obviously, fantasy players have to fill the QB spot, but this looks as if it's a week where running backs will have to carry the bulk of production.

START: Dak Prescott, QB, Cowboys: Despite a 3:5 TD:INT rate over the past four games, Prescott is one of the exceptions of the Week 9 rule as he faces a Giants defense that's the ninth-worst in fantasy football against opposing passers. Prescott passed for 405 yards and four touchdowns against New York in Week 1.

SIT: Kyler Murray, QB, Cardinals: He has failed to throw a touchdown pass in four of his past five games and faces the second-best fantasy defense against opposing quarterbacks. Murray is averaging a paltry 6 yards per attempt over the past two weeks, managing a mere 324 yards on 54 attempts.

START: Derrick Henry, RB, Titans: Owners of Henry are still waiting for a huge effort. They won't have to wait much longer, as Henry gets to run against a Panthers defense that couldn't stop 49ers back Tevin Coleman last week and are the fifth-most run friendly defense in fantasy football. Henry also faces a defense that has allowed a league-high 12 rushing touchdowns.

SIT: David Montgomery, RB, Bears: Coming off a career-best 135-yard effort against the Chargers, the rookie back will face an Eagles defense that allows 3.9 yards per carry and is the sixth-best run defense in fantasy football. Montgomery had not rushed for more than 67 yards prior to last week, so do not count a repeat effort from him.

START: Courtland Sutton, WR, Broncos: Sutton has a reception of at least 20 yards in all but one game this season despite not putting up a 100-yard game since Week 1. The Browns have done a decent job against the pass this season, but this should be the game the Broncos begin treating Sutton as the featured receiver he is and start giving him double-digit targets.

SIT: Marquise Brown, WR, Ravens: Baltimore will have its playmaking rookie wideout back in the lineup on Sunday night, but Brown — who hasn't played since Week 5 — returns against the league's best defense in the form of the Patriots, who also are the toughest in fantasy against opposing receivers. Brown has game-altering skills, but the risk far out-weigh any reward his fantasy owners can count on.

START: Hunter Henry, TE, Chargers: Henry has caught 18 of his 23 targets in the three games he has played since returning from injury while averaging 80 yards per game in that span. The Packers have been vulnerable against opposing tight ends all season and are seventh-worst overall in fantasy against them.

SIT: Trey Burton, TE, Bears: Don't invest in Burton having a "revenge" game against his former Eagles teammates. Burton is averaging fewer than 4 yards per target and has generated 16 or fewer receiving yards in his past four games. He's become more of an afterthought in Chicago's offense.

START: Tyrell Williams, WR, Raiders: Williams has caught touchdowns in each of his five games this season and faces a Lions defense that has allowed 14 passing touchdowns. Williams' deep-strike capabilities also plays well against Detroit, which gives up 12.5 yards per reception, seventh-worst in the league.

SIT: Baker Mayfield, QB, Browns: The Broncos are the third best fantasy defense against opposing passers, a fact that doesn't encourage signs of Mayfield breaking out of his slump. Mayfield has yet to throw multiple touchdowns in a game this season and has been picked off six times in the past three weeks.

START: Gardner Minshew II, QB, Jaguars: All-Pro DE J.J. Watt is lost for the season, taking the heart and soul of the Texans pass rush with him. That means more time to throw in London for Minshew, who has thrown at least two touchdowns in five games this season. Even with Watt, Houston had the fifth-worst defense in fantasy football against opposing passers, making Minshew that more enticing to use.

SIT: Mark Walton, RB, Dolphins: The Dolphins' new lead back will be facing a Jets defense that is second in the league in fewest yards per carry (3.3). The Jets have allowed 10 rushing touchdowns on the ground, but there's little to suggest that Walton will be in a position to add to that total, especially since Kalen Ballage will get the goal-line touches.

START: Allen Robinson II, WR, Bears: Robinson has averaged nearly 10 targets per game this season, a friendly number going against an Eagles defense that allows the most fantasy points to opposing receivers. He's scored all three of his touchdowns in the past three games, again a friendly number considering the Eagles have given up 16 scoring tosses.

SIT: Greg Olsen, TE, Panthers: The Kyle Allen era has not been kind to the veteran pass catcher, who has eight receptions for 70 yards over his past four games. If/when Cam Newton returns, things will get brighter, but as long as Allen is in the lineup, Olsen should be out of yours.

START: Matthew Stafford, QB, Lions: The veteran has averaged 315.5 yards over the past four games to go along with 10 touchdown passes in that span. Stafford has 33 completions of better than 20 yards this season, bad news for a Raiders defense that has struggled in passing yards allowed.

SIT: Carlos Hyde, RB, Texans: His production hinges on whether the Texans want to attack downfield with QB Deshaun Watson or if coach Bill O'Brien wants to play ball control. It looks as if the former will take place in London, so Hyde — who doesn't factor much in the Texans' passing offense — will be limited in a fast-paced game.