Fates are in the stars for midseason Titans-Rams showdown 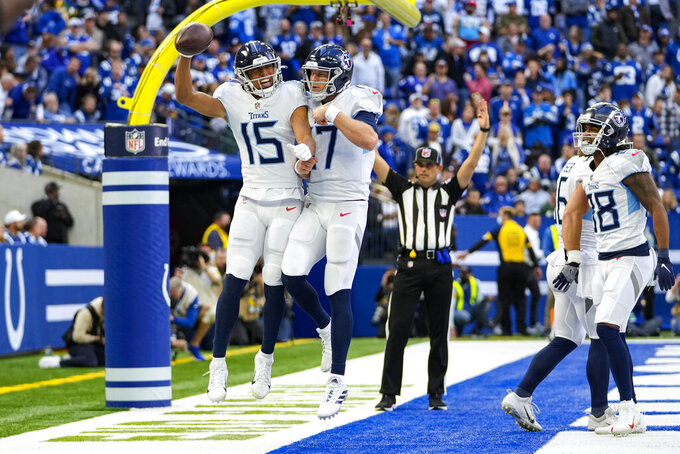 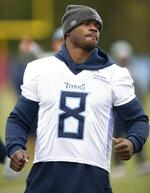 INGLEWOOD, Calif. (AP) — News of Derrick Henry's foot injury early this week removed some of the luster from the Tennessee Titans' visit to Los Angeles on Sunday night for a prime-time clash between surging conference co-leaders.

A few hours later, Von Miller's trade to the Rams turned a spotlight back up on a showdown between two teams that would love to meet again on the same SoFi Stadium field Feb. 13 in the Super Bowl.

Although an ankle injury might slow him, Miller expects to debut for his new team when Los Angeles (7-1) goes after its fifth straight victory in its only home game of November. The pass-rushing star calls his trade from Denver an “incredible” opportunity to suit up alongside Aaron Donald and Leonard Floyd for a team already leading the NFL in sacks.

Tennessee's Ryan Tannehill is the first quarterback to get the dubious honor of avoiding both Donald and Miller, his teammate for three years at Texas A&M.

“Can’t say I love facing him, but a ton of respect for him and know that he is a dangerous player,” Tannehill said.

The Rams just finished surging through a soft stretch of their schedule, but the arrival of the Titans (6-2) signals the start of LA's big second-half tests. Tennessee is tough even without Henry, who’s on injured reserve when the Titans make their first visit to still-new SoFi Stadium in search of their own fifth consecutive win.

The Tennessee offense faces dual difficulties, both in handling the Rams' defense and in forging a new identity without Henry, by far the NFL leader in yards rushing and attempts.

“We have a certain style that we are accustomed to, and when we win football games, we are doing certain things,” Titans coach Mike Vrabel said. “And then also, we will always try to find new ways to help us run the football, throw the football.”

Even with the sport's most dynamic ball carrier sidelined, this matchup retained some excitement when the Titans quickly added Adrian Peterson, the 2012 NFL MVP and one of the eight men to run for at least 2,000 yards, to the practice squad Tuesday. Exactly who replaces Henry remains to be seen, and it certainly won’t be Peterson on his own.

“I hate that, because he’s a great football player,” Rams coach Sean McVay said of Henry's injury. “He’s a dominant player. I love watching the way this guy has competed and really done so many special things for that offense over the last handful of years. ... I still think they’ll probably keep a similar identity, but Derrick Henry, he’s 1 of 1, the way that he’s played these last handful of years."

If the NFL trade deadline was a week later, Tannehill wouldn’t have had to face off against Miller. Instead, the Titans quarterback now has to prepare for an already loaded Rams defense that now features the linebacker Tannehill has known since they went to College Station as part of the same recruiting class.

Miller left A&M a year before Tannehill, who says it’s been fun watching Miller as a friend over the past decade or so.

“Talk about the timing,” Tannehill said. “I love Von. We had some great times together at A&M. Played in some really big football games, some fun football games.”

Kupp is rolling because of his immediate connection with Matthew Stafford, who's second in the league in yards passing (2,447), TD passes (22) and passer rating (118.0). He's averaging 319.5 yards and three TDs per game at SoFi.

Whether or not Peterson plays, the Titans will likely use a group approach to handle the heavy load Henry literally carried for this offense. Jeremy McNichols knows the offense best, having been the third-down specialist catching plenty of screens. They also have Dontrell Hilliard, who signed Oct. 27, and D’Onta Foreman.

“We will kind of see where everything goes as it plays out through the week and see which guys will be available to play for us on Sunday,” Vrabel said.

Left guard Rodger Saffold spent the first nine years of his career with the Rams, and now he has his first chance to face the team that drafted him out of Indiana in 2010.

Saffold said he’s excited to get back to Los Angeles and see some of his old teammates, friends and people he even trained with over the season.

“There’s a lot of different emotions, but this is the biggest game because it’s the next game so that’s how I’m treating it,” said Saffold, whose last game with the Rams was the February 2019 Super Bowl.

Receiver Josh Reynolds also returns to face the Rams, who drafted him in 2017. Reynolds, who started 13 games for Los Angeles last season, has 10 catches for 90 yards with the Titans while playing in just five games.