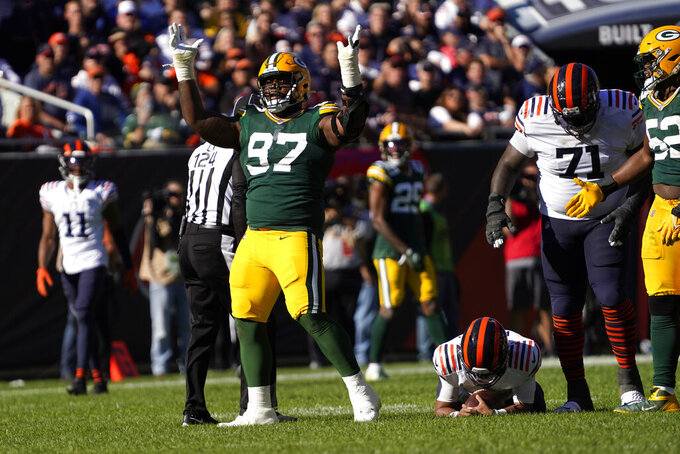 Now the 28-year-old quarterback is about to match up with Favre’s successor as Washington tries to cool off reigning MVP Aaron Rodgers and snap the Packers’ five-game winning streak.

“Brett Favre is the reason I started loving football,” Heinicke said. “I had so many of his jerseys. I remember watching the Packers game every Sunday with my dad, and during halftime, I would go out in the backyard and pretend like I was him and come back, watch second half. It’s a really cool deal.”

Heinicke has been to Lambeau Field as an opposing player before during his years with the Minnesota Vikings. The difference this time is he will be in uniform rather than in street clothes.

“To actually be on the field competing, it’s going to be a dream come true,” Heinicke said.

The records of both teams suggest Heinicke could be in for a rude awakening.

Green Bay (5-1) hasn't lost since falling to the New Orleans Saints on the season's opening week. Washington (2-4) is trying to avoid a third consecutive defeat.

The way Green Bay’s schedule is constructed, this shapes up as a potential trap game for the Packers.

Green Bay is coming off consecutive road wins at Cincinnati and Chicago. The Packers visit the unbeaten Arizona Cardinals just four nights after the Washington game. They follow that up by traveling to Kansas City.

With two demanding road tests on the horizon, Green Bay could be tempted to look past Sunday’s game. The Packers want to make sure that doesn’t happen.

“I know what’s after this game,” Rodgers said. “A short week against an undefeated opponent. A long week against the Kansas City Chiefs, defending representative in the Super Bowl from the AFC. So we know what’s in front of us. Personally, I don’t ever look past anybody, but you know what’s on the schedule. That’s just kind of normal. Anybody who doesn’t say that is probably just doing cliché talk.”

Since throwing two interceptions and no touchdowns in the Packers’ season-opening loss, Rodgers has returned to his usual form. The three-time MVP has 12 touchdown passes and only one interception during the Packers’ winning streak.

Rodgers is benefiting from Davante Adams’ continued rise. Adams has followed up his 2020 All-Pro season by leading the NFL in yards receiving (668) and sharing the NFL lead in catches (46).

Washington released kicker Dustin Hopkins and signed Chris Blewitt, a 26-year-old who will be making his NFL regular-season debut Sunday.

Hopkins, who was in his seventh season with Washington, missed a 42-yard field goal in a 31-13 loss to the Kansas City Chiefs last weekend. He was 12 of 14 on field-goal attempts this season but had missed two extra points in an Oct. 3 victory at Atlanta.

“(We) really appreciate everything Dustin has done for us,” Washington coach Ron Rivera said. “He’s a solid football player. He’ll get an opportunity to play again. I just felt at this time it was something that I felt we had to do going forward. This was my move, my decision, and I’ll live with it.”

Packers offensive tackle David Bakhtiari is practicing with the Packers again after opening the season on the physically unable to perform list, which meant he couldn’t play in the first six games. The Packers aren’t saying yet just when Bakhtiari will return as he comes back from a torn anterior cruciate ligament.

Green Bay outside linebacker Preston Smith, who played for Washington from 2015-18, injured his oblique in a 24-14 victory at Chicago last weekend. His status for Sunday’s game is uncertain.

With many of his teammates on defense out with injuries, Packers defensive tackle Kenny Clark has stepped forward lately. Clark recorded two sacks against the Bears and already has exceeded his 2020 season totals in sacks and tackles for loss.

Washington’s Chase Young has 1½ sacks over his last two games after getting none in his first four.

Washington’s J.D. McKissic had a career-high 110 yards from scrimmage in the Chiefs game, as he caught eight passes for 65 yards and had eight carries for 45 yards. He could get even more opportunities Sunday if Gibson is unavailable.