Few veterans on hand in latest stage of Titans' offseason 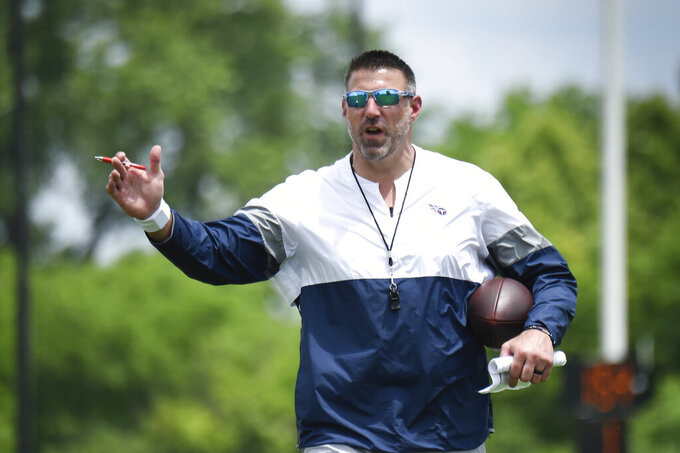 NASHVILLE, Tenn. (AP) — No Ryan Tannehill, Derrick Henry or A.J. Brown on offense nor safety Kevin Byard from the defense.

Instead, punter Brett Kern was the most senior member of the Tennessee Titans on the field Thursday in the first offseason practice open to reporters.

Coach Mike Vrabel said he's focused on coaching the players on the field and sharing information with those that aren't for the defending AFC South champs in the third and final phase of the NFL offseason.

“That’s the biggest thing that I’ve tried to explain to our football team whether it be about voluntary workouts or anything else that may come up, is that we have to respect each other’s personal decision to do what’s best for us and men like you,” Vrabel said.

The NFL Players Association has encouraged players to stick to a virtual offseason program.

As a player, Vrabel was heavily involved in the players union during his 14-year career either as a player rep or member of the executive committee. Vrabel noted he had teammates who didn't take part in the offseason program, and he respects that.

Safety Amani Hooker said there was communication about who would be at these sessions and who wouldn't. He said they respect everyone's decisions with everyone being a pro.

“When they come back, they’re going to be ready to fit in," Hooker said.

Younger Titans such as cornerback Kristian Fulton and running back Darrynton Evans couldn't stay away after losing their first offseason programs to the pandemic in 2020.

The Titans' second-round pick out of LSU in 2020, Fulton started two games as a rookie but was limited by injuries to six games.

Opportunity abounds this season for a starting role with the Titans having released cornerbacks Adoree Jackson and Malcolm Butler and safety Kenny Vaccaro for salary cap space.

Fulton called being able to practice on the field during these OTAs a great learning period, which he and other rookies missed out on in 2020.

“You're learning the things instead of being rushed into learning them as we were last year," Fulton said. "So OTAs are definitely helpful to get conditioning up and we’ll see where you at and really compete and get some good competition in before we head into the real thing.”

Evans was the third-round pick out of Appalachian State a year ago. Expected to back up the All-Pro and AP NFL Offensive Player of the Year in Henry, Evans was limited by injuries to just five games. He had only 14 carries for 54 yards and caught two passes for 27 yards and returned nine kickoffs.

A year ago, he worked out in South Florida and worked with Tannehill, Brown and tight end Jonnu Smith at times. Evans said everything is optional and a personal decision for each player.

“Everybody here had to make their own decision whether to come in or not,” Evans said. "But I thought this is the best thing for me to be able to advance on the field.”

Hooker is a likely starter with Vaccaro gone, so he couldn't pass up the opportunity to learn and lead. The Titans drafted cornerback Caleb Farley in the first round and cornerback Elijah Molden in the third and safety Brady Breeze in the seventh. Tennessee also signed veteran safety Matthias Farley.

Hooker tied for the team lead with four interceptions in 2020, but he said nothing’s guaranteed. He also wanted to get back into the flow of work, building trust and helping lead new teammates.

“For me, it was just come in and improve as a player, just keep getting better,” Hooker said.