Fields, Bears try to take another step when Commanders visit 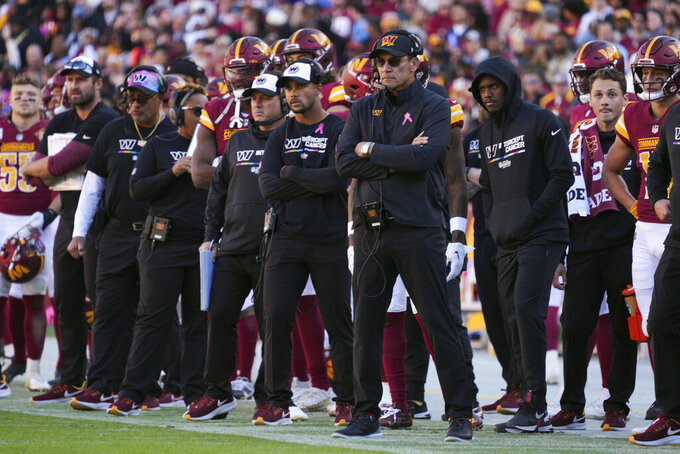 Washington Commanders head coach Ron Rivera stands on the sideline in the second half of an NFL football game against the Tennessee Titans, Sunday, Oct. 9, 2022, in Landover, Md. (AP Photo/Jess Rapfogel)

BETTING LINE: Bears by 1, according to FanDuel SportsBook.

TURNOVER DIFFERENTIAL: Commanders minus-7; Bears even.

COMMANDERS PLAYER TO WATCH: Rookie RB Brian Robinson plays his second game in five days, less than seven weeks since being shot twice in the right leg in an attempted robbery. He had nine carries for 22 yards rushing in his NFL debut against Tennessee on Sunday. With run-pass balance becoming one of Washington’s biggest issues, expect a bigger workload for the third-round pick out of Alabama, who impressed in training camp and preseason action and was expected to be the starter before the shooting.

BEARS PLAYER TO WATCH: QB Justin Fields. Fields finally showed signs of progress last week as he adapts to his second offense in as many NFL seasons. The former Ohio State star completed 15 of 21 passes while setting career highs in completion rate (71.4 percent) and passer rating (118.8) against Minnesota. He threw for a season-high 208 yards and a touchdown.

KEY MATCHUP: Bears DE Robert Quinn vs. Commanders LT Charles Leno. Quinn, who set a franchise record with 18 1/2 sacks last season, has just one. Maybe this is a chance to get going, facing a former Bear.

KEY INJURIES: QB Carson Wentz has been limited in practice with a sore right shoulder, but downplayed any concern about the injury. ... Rookie WR Jahan Dotson will miss a second consecutive game with an injured hamstring. ... TE Logan Thomas did not practice Tuesday because of a calf injury and was also ruled out along with CB William Jackson (back). ... The Bears secondary figures to get a big boost, with CB Jaylon Johnson (quad) expected back after missing three consecutive games. ... WR N’Keal Harry (high ankle sprain) was activated from injured reserve on Monday.

SERIES NOTES: Chicago had lost seven straight to Washington before winning in 2019. ... Commanders coach Ron Rivera played his entire nine-year NFL career as a linebacker for the Bears from 1984-92. He played all three games for the ’85 Bears on their championship run, and was the defensive coordinator of the 2006 team that advanced to the Super Bowl.

STATS AND STUFF: The Commanders have lost four in a row since holding on to beat Jacksonville in their season opener. ... They went 1 of 11 on third down in Week 5 against the Titans. ... Wentz has thrown for 10 touchdowns and six interceptions in his first five games with Washington. He threw an interception with 6 seconds left just outside the end zone last week to seal the loss to Tennessee. Wentz has been sacked 20 times, trailing only the Rams’ Matt Stafford and Colts’ Matt Ryan (21 each). ... Washington had just 12 handoffs to a running back in the Titans game compared to more than 40 drop-backs by Wentz. ... Second-year WR Dyami Brown caught his first two NFL touchdown passes last week — 75- and 30-yard receptions. ... The Commanders have forced a league-low one turnover. ... Washington’s five sacks against the Titans were the team’s most since it had five against the New York Giants on Nov. 8, 2020. Edge rusher Montez Sweat had two. ... Leno played his first seven pro seasons for the Bears before they released him in May 2021. ... The Bears scored 19 unanswered points to grab a 22-21 lead last week and were driving after a late touchdown run by Kirk Cousins. Former Viking Ihmir Smith-Marsette failed to get out of bounds and was stripped by cornerback Cameron Dantzler Sr. at the Minnesota 39 after a 15-yard reception, sealing the loss for Chicago. ... The Bears' 787 yards rushing through the first five weeks are the most for Chicago since the 1990 team had 835. ... LB Roquan Smith is tied for the NFL lead with 54 tackles. ... S Eddie Jackson is tied for second in the league with three interceptions. ... WR Darnell Mooney has six receptions for 146 yards the past two games. He had four catches for 27 yards through the first three games.