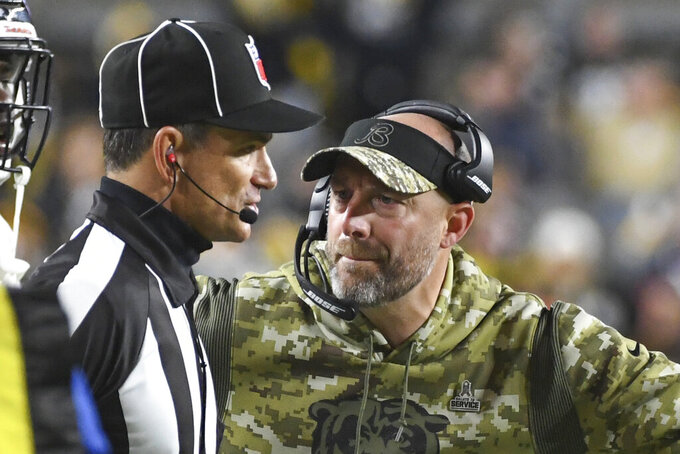 Chicago Bears head coach Matt Nagy, right, talks to an official on the sideline as his team plays against the Pittsburgh Steelers during the second half of an NFL football game, Monday, Nov. 8, 2021, in Pittsburgh. (AP Photo/Fred Vuich)

CHICAGO (AP) — The Chicago Bears stumbled past the halfway point of the season reeling with four straight losses and breathing a little easier at the same time.

That's because Justin Fields is starting to emerge. And when it comes to the future of the franchise, nothing is more important.

“We feel a lot different now,” coach Matt Nagy said Tuesday. “We feel better as to the types of plays we’re putting in that fit him, fit our offense. Trying to find that match and that balance. The last two weeks his decision-making and timing has been really, really good. And then he’s taking shots downfield, which is great.”

From a nightmarish first start in Cleveland in Week 3 to a performance in Monday's loss at Pittsburgh that seemed to stamp his arrival, Fields has made some huge strides. His biggest came against the Steelers, and that's one positive for a team stumbling at the bye.

He passed for a career-high 291 yards and helped rally the Bears (3-6) from 10 down in the fourth quarter, throwing a neat touchdown on the run to Darnell Mooney on the left side of the end zone to put them ahead for the first time with 1:46 remaining.

A week earlier against San Francisco, Fields spun away from several defenders on a dazzling touchdown run and squeezed a scoring pass to a diving Jesse James in the end zone. Against Green Bay in Week 6, he led a fourth-quarter touchdown drive to pull Bears within three before Aaron Rodgers ran for a score to make it a 10-point game.

That ability to zip passes through tight windows and hit receivers downfield combined with his quickness and poise has the organization thinking Fields can develop in a way Mitchell Trubisky never did. That belief is why they traded up nine spots with the New York Giants to draft the former Ohio State star with the No. 11 overall pick.

Even so, this wasn't the plan. Fields was supposed to back up veteran Andy Dalton. That changed when the three-time Pro Bowler suffered a knee injury in Week 2 against Cincinnati, his former team.

Despite the positive signs from Fields, the Bears haven't won since back-to-back victories over Detroit and Las Vegas. They've lost at least four in a row in each of the past three years. And that's only fueling more speculation about the futures of Nagy and general manager Ryan Pace after ownership opted to retain them following last season.

The defense. The Monsters of the Midway played well enough before slipping in recent weeks. Star LB Khalil Mack missing the past two games because of a foot injury didn't help. The three-time All-Pro was off to one of his best starts with six sacks in the first seven weeks, and the Bears are tied for fourth overall with 25. They rank 13th in yards per game — 23rd against the run and 10th against the pass.

The offense. Fields' recent progress aside, the offense has been a mess overall. Though they're tied for sixth in rushing, the Bears rank 31st overall, last in passing and 30th in scoring.

“We know we’re on the brink of being a great offense, so we’re just going to keep working,” Fields said.

LB Robert Quinn. The two-time Pro Bowler has bounced back in a big way this season with 6 1/2 sacks in eight games after finishing with just two last season — his first in Chicago.

WR Allen Robinson. Coming off one of his best seasons, Robinson has just 30 receptions for 339 yards. That's well off his pace from a year ago, when he finished with a career-high 102 catches for 1,250 yards.

RB David Montgomery was activated from injured reserve on Monday after missing four in a row with a sprained knee. And defensive tackle Akiem Hicks missed two games because of a groin injury and is dealing with an ankle problem. Robinson (hamstring) is banged up, too. The Bears were also hit hard by COVID-19 issues. And Nagy, who is vaccinated, missed the loss to San Francisco after testing positive.

The Bears are looking at a difficult stretch following the bye, with three of their next four games against teams currently leading their divisions. That starts with Baltimore playing at Soldier Field on Nov. 21. They get a bit of a breather when they visit Detroit on Thanksgiving. But after that, they host Arizona before visiting Green Bay on Dec. 12.