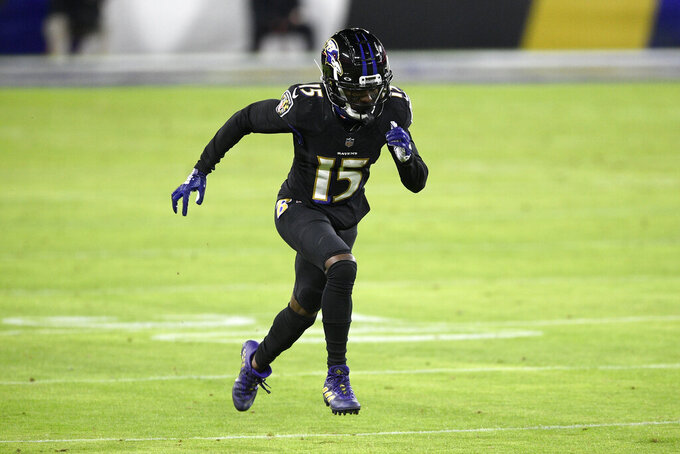 Baltimore Ravens wide receiver Marquise Brown runs a route against the Dallas Cowboys during the first half of an NFL football game, Tuesday, Dec. 8, 2020, in Baltimore. (AP Photo/Nick Wass)

BALTIMORE (AP) — The sight of Lamar Jackson racing toward the end zone on a 37-yard, fourth-down trek showed just how effective the Baltimore Ravens' offense can be when their quarterback is the centerpiece of a multi-faceted running attack.

Jackson faked a handoff, broke slightly to his right and zipped through the middle of the Dallas defense to provide Baltimore with the first of its four touchdowns in a 34-17 victory Tuesday night. Jackson finished with 94 yards rushing and the Ravens rambled for 294 yards on the ground to snap a three-game skid and provide hope that the team can use the momentum to run all the way into the postseason.

“This is what we need, “ said rookie running back J.K. Dobbins, who rushed for 71 yards and a score. “I feel like we’re ready to go now.”

Jackson and Dobbins were among nearly two dozen players who rode the reserve/COVID-19 list during a harrowing stretch that contributed heavily to Baltimore's longest losing streak since the middle of the 2018 season.

The Ravens (7-5) appear to be on the road to recovery, although receiver Dez Bryant was pulled during warmups and missed the game after a positive test for the potentially deadly virus.

Regardless, Baltimore took care of business against the overmatched Cowboys behind a productive running game that conjured memories of last season, when Jackson earned MVP honors and the Ravens set an NFL record for yards rushing while finishing 14-2.

It's going to take more of the same for Baltimore to soar past the other wild-card hopefuls, beginning Monday night in Cleveland (9-3).

“We’ve got all of our goals ahead of us, and for us to keep them there we have to keep winning," said Gus Edwards, who amassed 101 yards on just seven carries against the Cowboys.

The return of center Patrick Mekari from the COVID-19 list solidified an offensive line that's been in flux without injured left tackle Ronnie Stanley. Jackson and Baltimore's three running backs teamed to average 7.9 yards per carry, and the line did not allow a sack.

“It was very encouraging," coach John Harbaugh said. “Our guys did a great job. They blocked."

The defense celebrated the return of injured defensive linemen Brandon Williams and Calais Campbell, but the Ravens still gave up 388 yards against a team with an injury-riddled offensive line blocking for backup quarterback Andy Dalton.

Were it not for three missed field goals and a deflected pass that Baltimore rookie Patrick Queen turned into an interception, the score might have been closer.

“We still didn’t play how we wanted to play, but we got the win," Queen said. “So, we’re going to celebrate this win, but we know at the end of the day there’s some stuff that we have to clean up on the field.”

With receiver Willie Snead and tight end Mark Andrews still on the COVID-19 list, the Ravens needed a big game from wideout Marquise Brown — and he delivered.

Jackson completed only 12 passes, five of them to Brown for 39 yards. The second-year receiver made an excellent over-the-shoulder catch in the back of the end zone to make it 24-10 in the third quarter before receiving a big old hug from an appreciative Jackson.

Bryant took to Twitter after learning his initial non-conclusive test for COVID-19 was followed by a positive reading.

The former Cowboys star wrote that he was going to sit out the rest of the year, then, after drinking some wine, wrote about coming back after all.

Baltimore doesn't necessarily need Bryant, who has only four catches in three games, but his talk in the days leading up to the game about being a team player took a hit when he made his absence all about him.

“Since I tested positive for Covid before the game do the game stop or go on?" he wrote.

No significant injuries were reported in the aftermath of the game, a pleasant and unusual surprise for a team with nine players on injured reserve.

70 — That's how many consecutive field goal tries from inside 40 yards that Justin Tucker made before going wide left on a 36-yarder in the second quarter. The misfire came after a false start wiped out his successful kick from 31 yards.

The Browns are coming off an impressive win over Tennessee and are the only team left on Baltimore's schedule with a winning record. The Ravens beat Cleveland 38-6 in the season opener and could greatly enhance their position in the playoff hunt with a victory before closing against Jacksonville, the Giants and Bengals.