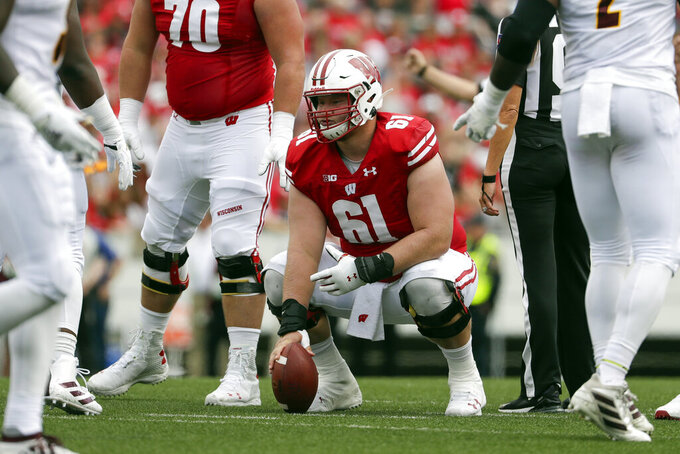 FILE - In this Sept. 7, 2019, file photo, Wisconsin center Tyler Biadasz gets set at the line of scrimmage during the first half of an NCAA college football game against Central Michigan in Madison, Wis. The Dallas Cowboys selected Biadasz in the fourth round of the NFL football draft on Saturday, April 25, 2020.(AP Photo/Morry Gash, File)

Now that his first draft with the Dallas Cowboys is finished, coach Mike McCarthy moves into an unusual offseason not knowing when Dak Prescott will be under contract.

Meantime, the Cowboys gave their quarterback a receiver they didn't think would be there in the middle of the first round in Oklahoma's CeeDee Lamb, and turned to arguably their biggest need at cornerback in the second round with Trevon Diggs of Alabama.

“It really starts tomorrow morning,” McCarthy said Saturday of his first full offseason. “We’ve kind of put on the side some of the planning and anticipation of what’s in front. Really already have two separate training camp schedules and plans that are completed.”

The coronavirus pandemic is keeping players away from facilities, forcing all meetings with coaches to be virtual, and might mean the Cowboys can't go to California for training camp as usual.

“There’s a set of rules and procedures that we’re operating in and we will use that process to get our team ready to win games,” McCarthy said.

The Cowboys used the final day of the draft to add another cornerback in Tulsa's Reggie Robinson II and a pass rusher with Utah career sacks leader Bradlee Anae.

Offensively, Dallas traded up for Wisconsin center Tyler Biadasz and added a Prescott understudy with James Madison quarterback Ben DiNucci. The Cowboys put the franchise tag on Prescott while they try to agree on a long-term deal.

McCarthy said he expected the draft to differ from his days in Green Bay, where he spent 12-plus seasons and won a Super Bowl. And it was.

“I think it’s like anything in life, it’s the communication between the individuals and just being on the same page,” McCarthy said. “We’ve had some good fortune with the players that were available when it was our opportunity to pick. We’re ecstatic about the class we put together.”

It worked out well the last time the Cowboys drafted a center out of Wisconsin. So, after five-time Pro Bowler Travis Frederick surprisingly retired at age 29, Dallas traded with Philadelphia and took Biadasz with the final pick of the fourth round.

The Cowboys traded down to near the bottom of the first round for Frederick in 2013, and he was the starter from the beginning. He missed the 2018 season because of Guillain-Barre syndrome, a nerve disorder that was part of the reason he retired even though he returned last year.

“He’s an animal, and I try to mold my game just like that,” said Biadasz, who skipped his final season at Wisconsin after winning the Rimington Award as the nation's top center. "I think our body types are very similar, and I look forward to just keeping up what he’s placed in the Dallas organization.”

The Cowboys re-signed Joe Looney, who replaced Frederick when Dallas made the playoffs two years ago. Left guard Connor Williams and second-year man Connor McGovern could also get a look at center.

With Robinson and Diggs, it's the second time in four years the Cowboys drafted multiple cornerbacks.

Chidobe Awuzie, a second-round pick in 2017, was the starter last season alongside Byron Jones, who took a big contract from Miami in free agency. The other 2017 choice, Jourdan Lewis, still has a shot to be a contributor along with Anthony Brown, a 2016 sixth-rounder.

The Cowboys have 10 cornerbacks on the roster before adding undrafted free agents, which should make that position among the most competitive through training camp.

NO RUSH ON THE RUSH

Defensive end was arguably as big a need as cornerback going into the draft after 2019 sacks leader Robert Quinn went to Chicago in free agency. The Cowboys finally addressed it in the fifth round with Anae, who led the Utes in sacks for three straight seasons and finished with 30.

The pass rush is still led by DeMarcus Lawrence a year after he signed a $105 million contract, while Tyrone Crawford is coming off hip surgery. The next most proven players, Aldon Smith and Randy Gregory, are seeking reinstatement from substance-abuse suspensions. Smith hasn't played since 2015, and Gregory missed last season following his fourth suspension.

DiNucci said McCarthy's brother was his eighth-grade basketball coach in the Pittsburgh area. He introduced himself to the man who ended up being his new coach in January when they were in an elevator together at the hotel that's part of Cowboys headquarters.

“He was very familiar with our team," DiNucci said. “I was kind of surprised that he knew who I was. Now I’m going to be able to play under him, and it’s just crazy.”