First-place Eagles have a cushion despite losing record 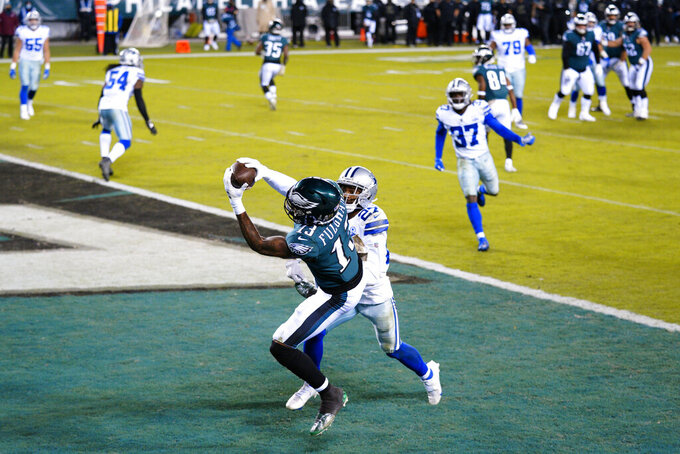 PHILADELPHIA (AP) — The Philadelphia Eagles have the luxury of working through problems as a division leader with a losing record.

While the Eagles (3-4-1) rested and recovered during their bye, they didn’t lose any ground in the NFC East. Philadelphia maintained a 1 1/2-game lead because the Cowboys (2-7) lost and the Giants (2-7) beat Washington (2-6).

The second half begins with a division matchup at New York and ends with a trip to Dallas and a home game vs. Washington. The five games in between are much tougher, but the Eagles may not have to win any of them if they take care of business against the teams in the East.

“We’re in an eight-game season right now and even though we have a slight edge in the NFC East, it’s not a huge edge,” defensive coordinator Jim Schwartz said Monday. “How the season goes will be dependent on how these last eight games go, particularly the division games.”

The offense has been inconsistent and mistake prone. Carson Wentz has 16 turnovers, including 12 interceptions. He only threw seven picks in each of the previous three seasons.

All of those giveaways aren’t Wentz’s fault. Injuries have forced the team to start 10 offensive linemen and backups at 10 positions overall. Wentz and center Jason Kelce are the only starters who have played every game.

Still, quarterbacks take most of the blame when offenses struggle and Wentz knows he has to improve significantly in the second half.

“I’m going to stay aggressive,” Wentz said. “I’m not going to change who I am but I can protect it better.”

Coach Doug Pederson dismissed any suggestion that Wentz should be benched for rookie Jalen Hurts.

“Carson is our starter and we got a lot of trust and faith in him that he can get the job done,” Pederson said.

The Eagles are having success scoring in the fourth quarter. Wentz led comeback wins at San Francisco and against the Giants, including a touchdown pass in the final minute to beat New York. Wentz had a rushing TD in the final minute to tie the Bengals. The Eagles scored 22 in the final quarter against Baltimore but failed on a 2-point conversion that would’ve forced overtime. Wentz has six TDs, only two picks and an 84.6 passer rating in the fourth quarter.

Wentz has to protect the ball better. He forces some throws to inexperienced receivers who aren’t always running routes sharply or correctly and aren’t coming up with contested catches. Wentz tries too hard to create plays to make up for the lack of talent around him and it ends up costing him at times.

“I think there’s times he probably feels that way,” Pederson said. “But we also continue to coach and (say): ‘Hey, you’ve got to trust the guys around you. Just execute the offense and all that.’ But I do feel like at times there might be some opportunities where he feels like he’s got to take it upon himself. And that’s just who he is. That’s the aggressive nature and his demeanor, and I love having the ball in his hands. He’s also a great playmaker for us, and I never want to pull that ball out of his hand.”

Wide receiver Travis Fulgham was an excellent find by the personnel department. Cut four times by three teams since Detroit selected him in the sixth round of the 2019 draft, Fulgham has taken advantage of the opportunity the Eagles gave him. Since his debut with the team in Week 4, Fulgham has 29 receptions for 435 yards and four TDs.

Tight end Zach Ertz, who averaged 89 catches, 930 yards and seven TDs the previous four seasons, had only 24 catches for 178 yards and one TD in six games before suffering an ankle injury.

Minus-7 — The Eagles have 17 giveaways and 10 takeaways. That needs to improve. Simply staying even in the turnover department would be a major improvement.

The Eagles visit the Giants (2-7) on Sunday. They had to rally from an 11-point deficit in the final six minutes to beat the Giants 22-21 in Week 7.