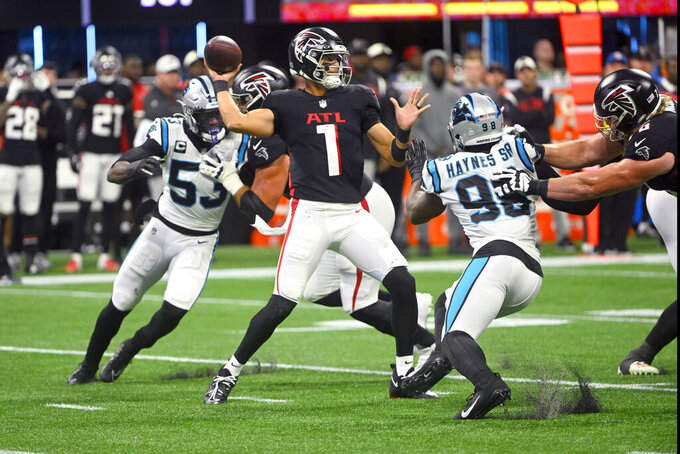 Atlanta Falcons quarterback Marcus Mariota throws during the first half of an NFL football game against the Carolina Panthers Sunday, Oct. 30, 2022, in Atlanta. (AP Photo/John Amis)

ATLANTA (AP) — The Atlanta Falcons have remained consistent in their commitment to running the ball without becoming predictable.

The Falcons (4-4) will look to stay there when they play the Chargers (4-3), who are coming off a bye week, on Sunday.

Atlanta remained competitive despite playing its last four games without top running back Cordarrelle Patterson, who had knee surgery. Patterson returned to practice on Wednesday and could come off injured reserve as soon as Sunday.

Falcons quarterback Marcus Mariota will face the Chargers’ Justin Herbert in a matchup of Oregon alumni.

The Falcons rank fifth in the league in rushing and 29th in passing. Even so, Mariota has thrown seven touchdown passes in the last four games.

Damiere Byrd is emerging as a deep threat for Mariota with four catches for 142 yards and two TDs the last two weeks. Second-year tight end Kyle Pitts had five catches for 80 yards and a TD in last week’s 37-34 overtime win over Carolina.

“They’re doing a really good job,” Staley said. “They run the ball at a really high level, and then they throw the ball down the field. They get a lot of explosions both ways.”

Patterson, a former wide receiver, finished his college career at Tennessee in 2012 following his transfer from Hutchinson (Kansas) Community College, where Staley was the associate head coach and defensive coordinator for two years.

“Rare size and speed,” Staley said of Patterson. “Rare acceleration. Rare contact player. He’s 230 (pounds). People look at him and they don’t realize how big he is. He runs fast through the smoke, fearless through the smoke. I saw it as an 18-year-old kid at Hutchinson Community College. He was the same way then that he is now.”

Injuries to wide receivers have contributed to recent struggles by Herbert and the Chargers' offense. Keenan Allen has played in only two games, Mike Williams will be out for at least the next three, and Joshua Palmer was sidelined by a concussion in LA's loss to Seattle before its bye.

Allen played during the first half of the Seattle game but had a setback in his rehab from a hamstring injury during the week off. He is doubtful for Sunday. Palmer is out of the concussion protocol.

Even if Palmer plays, it is likely that Herbert’s favorite targets will be running back Austin Ekeler and tight end Gerald Everett.

Ekeler leads NFL running backs with 53 receptions. He could become the first back in league history with three straight games of at least 10 catches. Everett, meanwhile, has caught at least five passes in three of the last four games.

Patterson would join rookie Tyler Allgeier and Caleb Huntley to add more balance and diversity at running back to an offense that's already become the first in the NFL to have four players run for at least 250 yards in its first eight games. That includes Mariota, who has 280 yards and three touchdowns on the ground.

Despite overhauling their defense in the offseason, the Chargers have allowed 27 points per game, which is second most in the league. They have allowed 5.95 yards per scrimmage play, which is 29th.

The Chargers have been the Bermuda Triangle for kickers since they moved to Los Angeles in 2017. Dustin Hopkins will miss Sunday’s game due to a hamstring injury suffered on Oct. 17 against Denver.

Taylor Bertolet has kicked in two games for Hopkins but showed up on Thursday’s practice report with an injury. Cameron Dicker has been signed to the practice squad and could be the 13th kicker the Chargers have used in six seasons.

The Bolts will face one of their former kickers Sunday in Younghoe Koo. He was 3 of 6 on field goals in four games in 2017. Since joining the Falcons in Week 10 of 2019, Koo has made a league-high 101 field goals and has a 91% accuracy rate. He has four game-winning field goals the past two seasons, including last Sunday in overtime against Carolina.