Fitzpatrick set for MRI in 2 weeks, no timetable on return 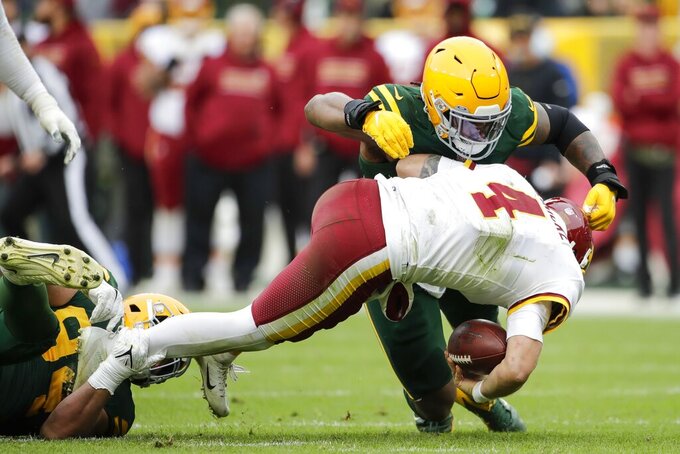 Ryan Fitzpatrick isn't walking through that door any time soon, which means Washington will continue to roll with Taylor Heinicke at quarterback with the season slipping away.

Coach Ron Rivera said Monday that Fitzpatrick would have an MRI on his injured right hip in a couple of weeks, which would then allow the team to set a course for the 38-year-old's return.

Rivera has never given a timeframe for Fitzpatrick to be back, though reports indicated it was a six-to-eight week injury, which would have had him playing sooner rather than later.

Instead, Heinicke turned in another inconsistent performance in a 24-10 loss on the road against the Green Bay Packers and is expected to make his eighth career NFL start Sunday at the Denver Broncos. Rivera believes Heinicke's “inexperience is showing,” which is the opposite of Fitzpatrick in his 17th pro season.

Heinicke was 25 of 37 for 268 yards, a touchdown and an interception. He also fumbled on a QB sneak on fourth-and-goal, and his knee was down just before the goal line on what he thought was a rushing TD and celebrated with a Lambeau leap.

Rivera asked the league for an explanation, but the fact is Washington is 2-5 and on the verge of playing for next year. He won't go that far yet.

"I know the expectations were high coming into this year, and the truth of the matter is we haven’t lived up to those," Rivera said.

“We still have 10 games left to play, obviously, and anything can happen if you take them one at a time. What I’m hoping for and looking for is for us to start playing consistent football, better football.”

Washington has a legitimate No. 1 receiver in Terry McLaurin, which is a boost no matter who's the QB this season and next. McLaurin had seven catches for 122 yards and a TD against Green Bay and provides a stable option in the passing game every week,

The defense continues to struggle, even if some of it this time was the magic of Aaron Rodgers. That's little consolation with a schedule coming up that includes Tom Brady, Dak Prescott and perhaps Russell Wilson.

Tight end Ricky Seals-Jones has made the most of his promotion in Logan Thomas' absence. He had six more catches in the Packers game and should be part of Washington's offense even after Thomas returns.

Rookie linebacker Jamin Davis is playing like one at times, though Rivera said the first-round pick will get better in certain situations once he has played them more in the NFL. With Jon Bostic out, Davis has gotten a bigger role with no choice but to learn on the fly.

Rivera said Thomas, who missed the past three games with a hamstring injury, is getting “closer and closer” to returning.

Thomas is eligible to be activated off injured reserve, but could be given the bye week to recover and target the Nov. 14 game against Tampa Bay.

Right guard Brandon Scherff (knee), WR Curtis Samuel (groin) and WR Dyami Brown are also out. Their status will be determined later this week, but it's a good bet they could all miss the Broncos game.

Running back Antonio Gibson continues to play through a shin injury that includes a stress fracture.

“One of the things that we’ve kind of fallen off lately has been scoring in the red zone, especially in the last two weeks,” Rivera said. “We’ve had opportunities, and we haven’t done it."

Washington better win Sunday at Denver to avoid falling to 2-6. The Broncos are 3-point favorites, according to FanDuel Sportsbook, in Washington's final game before its bye week.

“This is a game that is, I think, very important going into the bye,” Rivera said. “It could really set the tone and tempo for us going into it and something we can build on as we come out of the bye.”