Flacco's time as Jets' top QB winds down, Wilson on way back 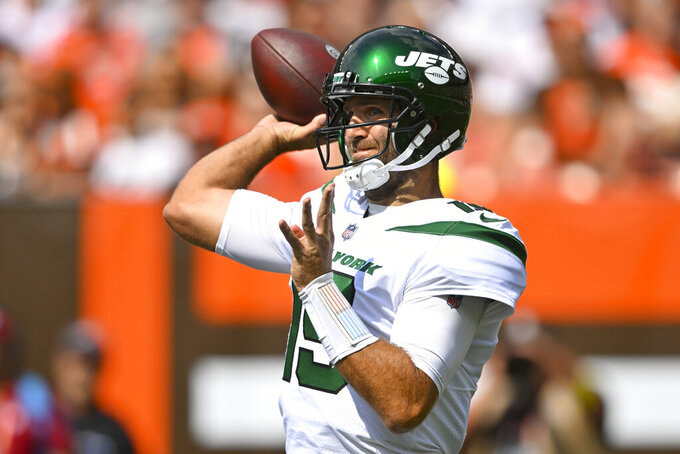 FLORHAM PARK, N.J. (AP) — Zach Wilson is getting closer to playing again for the New York Jets. That means Joe Flacco's time as the starting quarterback is coming to a close.

It could be next week. Or maybe a few weeks. Either way, when Wilson's knee is totally healthy, he'll be back under center — even if the Jets are flourishing under Flacco.

“Zach is the future of the organization, we all know that,” coach Robert Saleh said earlier this week. “As soon as the doctors clear him, we will get him on the field.”

Saleh's response was to a question about whether he sees a scenario in which Flacco remains the starter even when Wilson is healthy. Wilson is working his way back from a bone bruise and arthroscopic knee surgery after being injured in the Jets' preseason opener at Philadelphia on Aug. 12.

Saleh has previously Week 4 in Pittsburgh will be the earliest Wilson would return. That's still not a definite, despite the 23-year-old quarterback ramping up activities during practice this week.

It's a tricky situation because this season is all about evaluating Wilson and getting a better handle on whether he's the long-term answer at quarterback. But if the 1-1 Jets win again Sunday against Cincinnati with Flacco, it could be a tough sell to the locker room — and the fans, who desperately want to see their team's 11-year playoff drought snapped.

“Well, I don’t want to be a broken record,” Saleh said. “But I’ll be happy to answer that question a million times over when Zach is healthy and ready to go — but Zach is the future of the team.”

Meaning, there is no quarterback controversy.

Flacco is doing all he can to establish himself as the quarterback of right now. The 37-year-old veteran led the Jets to a stunning 31-30 victory at Cleveland last Sunday, rallying New York from 13 points down with 1:55 left in the game.

And even for someone who has won a Super Bowl and been selected the MVP of the NFL's biggest game, the win was special. He got a bear hug from Saleh as he entered the locker room after the win, then jumped up and down in the middle of a group of jubilant teammates.

It was a fun moment caught by the Jets' video crew and posted on the team's social media accounts.

“Obviously when we're doing that, I have no idea that that’s going to get out there on social media and those kind of things,” the usually stoic Flacco said with a smile. “I probably wouldn’t have (done it). It would’ve been like me at a wedding: I would’ve been standing at a table, making sure I’m not on somebody’s camera.”

Even Flacco's young children thought it was funny — and unusual — to see their father letting loose.

“They were just all laughing at me," Flacco recalled, "and saying, ‘Dad, why were you doing this when you came to the locker room?’”

Well, because it was an unexpected victory in a career that has been filled with big wins. But the truth is, he doesn't know how many more opportunities there will be like that to celebrate.

Flacco's not thinking of that now, though. He's focused on facing the Bengals. Whatever happens beyond that, it's out of his hands.

“I am grateful for the opportunity that I’ve had for the last two weeks and this upcoming week to put our team in a position to win and put our team hopefully in a position to be in a good spot moving forward for the rest of the year,” Flacco said. “And that’s my job, that’s what I can do, and I’m happy about it.”

Flacco, whose 616 yards passing rank third in the NFL, knows what his role is now. He also recognizes the importance of Wilson to the franchise — from the front office and coaching staff, all the way down to those win-hungry fans.

So if this is his last opportunity to start for the Jets, he's ready to make it another good one.

“You always hear that this is the ultimate team sport and it really is,” Flacco said. “When your number is called, you step up and you do your job."

NOTES: Wilson was the only player listed as out for the Jets this week on the injury report. ... WR Corey Davis (knee) was a full participant and is expected to play despite being listed as questionable. ... Also questionable but expected to play were: LT George Fant (knee), DE John Franklin-Myers (toe, quad), TE C.J. Uzomah (hamstring), S Jordan Whitehead (calf) and DL Quinnen Williams (foot).