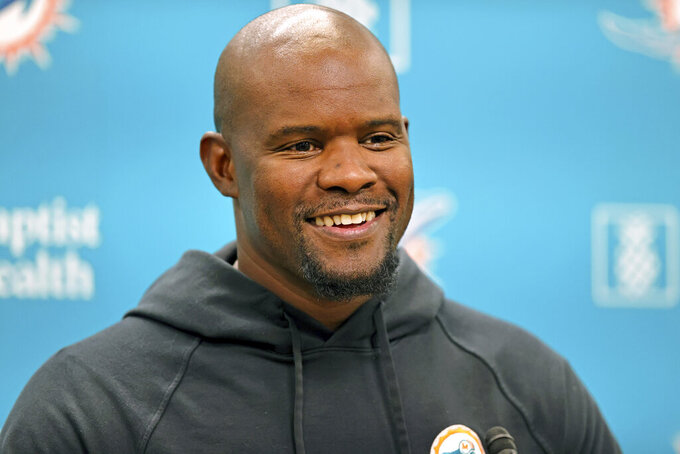 As such, Flores knows this: The Miami Dolphins aren’t going to rattle Brady on Sunday.

That’s almost certainly true, but the Dolphins (1-3) will still be tasked with coming up with something when they make the across-the-state trip to see Brady and the Super Bowl champion Tampa Bay Buccaneers (3-1) this weekend.

Miami has lost three straight; Tampa Bay is coming off last weekend’s win at New England, Brady’s return to the field that he called home for two decades.

For some Dolphins, this is old hat since Brady was in the AFC East for two decades in New England and facing Miami on a twice-a-year basis. For others, this will be a first, either playing against Brady, playing against the reigning champs, or both.

Consider: Brady was drafted in 2000, a month and a half before Dolphins rookie linebacker Jaelan Phillips — Miami’s fifth-youngest player — celebrated his first birthday.

“It’s pretty crazy obviously to have the opportunity to play against somebody I’ve been growing up my whole life watching,” Phillips said. “I can remember all of the Super Bowl parties at the house when I’m 8 years old or 10 years old, watching him dominate. But to be honest, coming into the game, I’m not about to be star-struck. You can’t really focus on ‘Oh my gosh, this is Tom Brady.’”

Football coaches would all say the same thing, that they want their teams to prepare the same way each week, to prepare to the utmost each week. Flores is no different. But even he acknowledges that when a team is playing against Brady — or the Super Bowl champions — then with the human condition being what it is, there might be a little extra attention paid to detail that week.

“I shouldn’t say there’s a little bit more excitement. That’s probably the wrong thing to say,” Flores said. “We’re excited to play every week. But when you play against arguably the best player of all time and they’ve got a bunch of great players, you have to up your level of preparation and up your level of intensity and execution. I hate that it’s like that, honestly.”

Brady is 44, and as has been proven many times, is the NFL’s closest thing to ageless. He’s second in the NFL this season in passing yards and is tied for third with 10 touchdown passes.

There have been five 4,000-yard seasons by someone in their 40s in NFL history; Brett Favre has one, Brady has the other four and he’s on pace for yet another.

NOTES: The Dolphins placed WR Will Fuller (finger) on injured reserve. Fuller had already been ruled out for this week, and now will miss next week’s game in London against Jacksonville and the Oct. 24 home game against Atlanta as well. ... Flores addressed Tuesday's trade of returner-receiver Jakeem Grant to Chicago for the first time. “We felt like we’ve had some depth at the receiver room. We wanted to get some other guys going as receivers and in the return game. So that kind of went into that decision, for sure," Flores said.