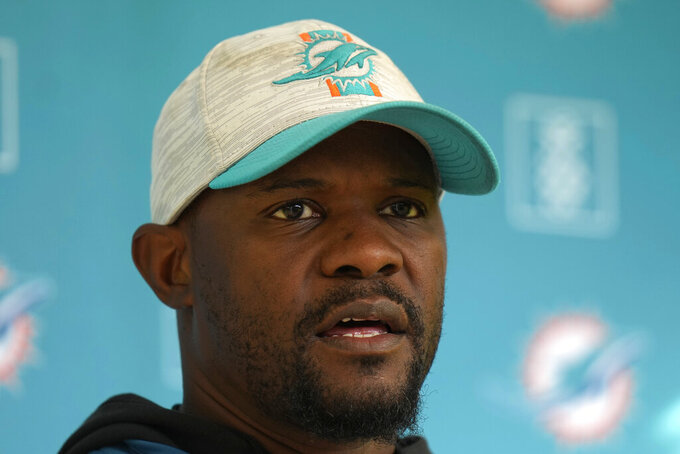 Brian Flores Head Coach of the Miami Dolphins speaks to the press during a practice and media availability by the Miami Dolphins In Ware, England, Friday, Oct. 15, 2021. The Dolphins play the Jaguars in a regular season NFL game on Sunday at Tottenham Hotspurs White Hart Lane stadium in London. (AP Photo/Alastair Grant)

MIAMI GARDENS, Fla. (AP) — Brian Flores is trying to do the right thing.

The coach of the Miami Dolphins hasn’t blamed his team’s 1-5 start on injuries, on not having Tua Tagovailoa for nearly four full games, on bad calls or anything else. He refuses to point the finger at just about anyone.

Except himself. And even that might not be working. Flores has been repeating similar refrains over the past five weeks, as the Dolphins have fallen from first to worst in the AFC East.

— “As a coaching staff, we need to put them in better positions.”

There’s something to be said for a coach taking ownership and responsibility for what’s going wrong. But the message doesn’t seem to be inspiring the Dolphins to change anything.

And of the 22 times the Dolphins have lost under Flores since the start of his tenure in 2019, the most befuddling was Sunday’s 23-20 defeat to a Jacksonville team that had lost 20 consecutive games.

Miami is one of only three teams — Cleveland and Seattle are the others — to lose two games after leading by at least 10 points so far this season. And the Dolphins have been outscored by 78 points this season, the second-worst differential in the league behind Houston’s minus-80.

“You just have to get things corrected, get things fixed and continue to put your head down and work,” said Tagovailoa, the starting quarterback who missed most of Week 2 and then all of Weeks 3, 4 and 5 before returning for Sunday’s loss.

“I think that’s the only way you go about those kind of things. I think we’re very close as a team to getting where we want to be.”

At 1-5, the odds of salvaging postseason hopes aren’t exactly realistic.

Since the AFL-NFL merger, only four of the 182 teams that started 1-5 went on to make the playoffs. Washington did it last season by winning the NFC East at 7-9, though with Buffalo either three or four games ahead already of the Dolphins — depending on their outcome Monday night — a run to the AFC East crown seems most improbable this season.

And really, there isn’t anything the Dolphins can point to as a real reason for hope. They lost 35-0 at home to Buffalo, after losing 56-26 in Buffalo to end last season, so the gap between them and the AFC East’s best team is pretty wide.

There was the 27-17 home loss to a previously winless Indianapolis team, a 28-point loss to Super Bowl champion Tampa Bay and then Sunday’s defeat against a Jacksonville team that was in the throes of the NFL’s longest losing streak in 45 years.

Flores keeps saying some version of “it starts with me.”

He needs the 53 guys on his roster to be saying the same, or the Dolphins might be looking at big changes when this season is over.

Tagovailoa completed 33 of 47 passes in his return for 329 yards, two touchdowns and one inexplicable interception. He salvaged multiple plays while under major pressure and seemed to be in good rhythm after not playing for nearly a month.

The running game. Again. The Dolphins had fourth-and-1 from their 46 on two different occasions in the last 6 1/2 minutes — they punted the first time, then didn’t get the yard the second time and gave the ball back to Jacksonville for what became the winning drive. Miami ran the ball 20 times for 77 yards, no runner gaining more than 24 on the day.

The offensive line. Miami seems to have finally found the five-man unit that it likes, and Tagovailoa was not sacked Sunday. It has been a maligned unit for much of the season, and Miami’s inability to run the ball — or get that yard on the fourth down late in the game — shows more work remains. But keeping Tagovailoa on his feet was a clear sign of progress.

Play-callers. Especially on that last fourth-and-1. Backup QB Jacoby Brissett is a proven short-yardage-getter, and it was puzzling to not use him in that situation.

Not having cornerbacks Byron Jones and Xavien Howard clearly hurt Miami on Sunday. That’s a lot of depth to not have at one position, and the secondary faces Atlanta’s Matt Ryan this weekend.

$43.4 million: That’s the combined total of the three largest cap hits on the Dolphins — Jones, Howard and WR DeVante Parker, a trio that was inactive for the game against the Jaguars because of injuries.

The Dolphins (1-5) will play host to Atlanta (2-3) on Sunday. The Falcons are coming off a bye week. Miami will be seeking to avoid what would be the sixth instance in the past 18 seasons of starting 1-6 or worse.