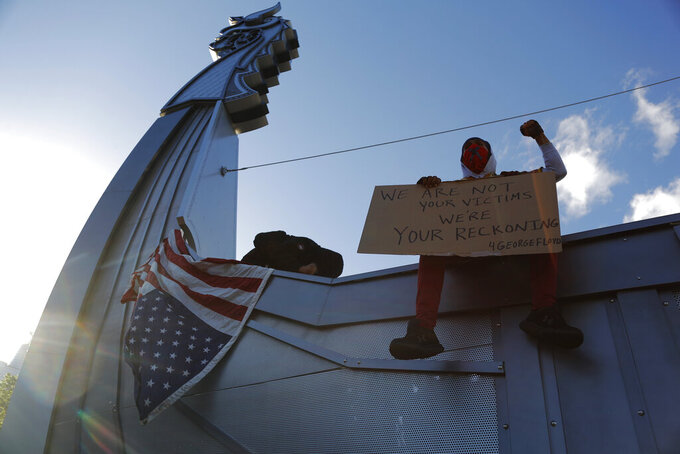 Protesters gather outside the Minnesota Vikings football stadium Friday, May 29, 2020, in Minneapolis. Protests continued following the death of George Floyd who died after being restrained by Minneapolis police officers on Memorial Day. (AP Photo/Julio Cortez)

MINNEAPOLIS (AP) — Eric Kendricks woke up distressed shortly after George Floyd was killed just a few miles from the stadium where the Minnesota Vikings play.

Kendricks, the All-Pro inside linebacker who has mostly stayed out of the spotlight during his first five seasons in the NFL, was “super emotional” enough that he took to his Twitter account to call out the league for what he and many of his peers saw as inaction on social justice issues.

A few days later, Kendricks participated in a video compiled by several high-profile players voicing concern about what they felt has been suppression from the league since quarterback Colin Kaepernick began kneeling during the national anthem before games in 2016. Commissioner Roger Goodell issued an apology the day after for “not listening” earlier and encouraged players to speak up and peacefully protest.

For the Vikings, like their fellow Twin Cities sports figures, the death of Floyd hit close to home. It has also, naturally, spurred a surge of action.

The handcuffed black man's neck was pressed by the knee of white Minneapolis police officer Derek Chauvin — for several minutes even after he stopped moving and pleading for air — into the pavement on Chicago Avenue on May 25. That's the same street that travels directly in front of the gleaming glass doors of U.S. Bank Stadium.

“I’m a child of the '60s, OK? So this has been going on my whole life,” said Vikings co-defensive coordinator Andre Patterson, adding: “But this is the reason why this one’s different, because the whole world got to see life leave that man’s body.”

Kendricks and Patterson are part of a social justice committee the Vikings formed three years ago with the blessing of owners Zygi Wilf and Mark Wilf, brothers who are the sons of Holocaust survivors. The Wilfs announced a new $5 million commitment to organizations fighting hate, racism and inequality. The social justice committee endowed $125,000 for a scholarship in Floyd's name to be awarded annually to black graduating high school seniors in Minneapolis and St. Paul pursuing post-secondary education.

The Vikings, like many sports teams, have been trying to use their vast public platform. They've also been privately having difficult but productive conversations about these issues that have erupted across the country and the world.

Kendricks was one of 10 players who met with Minneapolis police chief Medaria Arradondo and other officers last weekend about ways to help. General manager Rick Spielman's voice cracked as he detailed one of his black adopted sons being pulled over by police without cause while driving his wife's car. Running back Ameer Abdullah, whose father marched for civil rights in 1965 before serving in the Vietnam war, spoke of growing up as a black Muslim in Alabama.

Coach Mike Zimmer, who said two years ago he believes in the importance of standing for the national anthem, might have to confront the subject again this fall. Kendricks and Abdullah, who appeared with six members of the Vikings on a video conference call with reporters on Wednesday, said they weren't focused on that form of protest for now. Zimmer, though, moved players with his words on the topic in a team-wide virtual meeting this week.

“He humbled himself greatly and said, ‘Man, I don’t understand, and maybe I haven’t given this as much attention, but I know I love every single last one of you guys in this room and I’ll fight for you guys just like you were my sons.' That meant a lot," Abdullah said.

As the Vikings unveiled their initiatives on Wednesday, the Pohlad Family Foundation, the charitable arm of the owners of the Minnesota Twins, announced a $25 million commitment to racial justice in a two-phase strategy earmarked for immediate relief for impacted communities and long-term structural change.

In basketball, the Timberwolves and Lynx organization have joined a partnership first formed by the Milwaukee Bucks and Sacramento Kings to fight social and racial injustice. Timberwolves guard D'Angelo Russell marched with protesters in his hometown of Louisville, Kentucky, where the death of Breonna Taylor has also stirred uprising.

Guard Josh Okogie and coach Ryan Saunders were in a crew spearheaded by Vikings tight end Kyle Rudolph at a food and goods distribution event last week in front of a south Minneapolis grocery store that has temporarily closed because of vandalism, looting and arson.

Saunders and Lynx coach Cheryl Reeve are part of a committee overseeing disbursement of the Minneapolis Foundation Fund for Safe Communities, which targets violence prevention, social inequity, criminal justice system reform and other issues. Saunders and other staff worked Thursday to pack food for Urban Ventures, a youth-focused community center in south Minneapolis located in the epicenter of the destruction that emerged from the unrest over Floyd's death.

Wild defenseman Matt Dumba, whose mother is Filipino, recently helped form the Hockey Diversity Alliance with a handful of other NHL players to try to eradicate racism and promote diversity within their sport. Often the only non-white on his youth teams in Alberta, Dumba recalled this week some instances when he left the rink in tears after receiving racial taunts from opponents.

“I grew up feeling that I had to protect my parents from that as well because I didn’t want to see my mom cry. I’d bottle that up inside. It would fuel me to play my hardest and work my hardest,” Dumba said. “Can you imagine that love for the game if you never had to fight with being discriminated against or feeling like you don’t belong? That’s what I want to promote for the youth, because I think there’s a generation of hockey players that can exceed all of our expectations and really change the game.”