Flyers puzzled by fall from playoffs to worst in the East 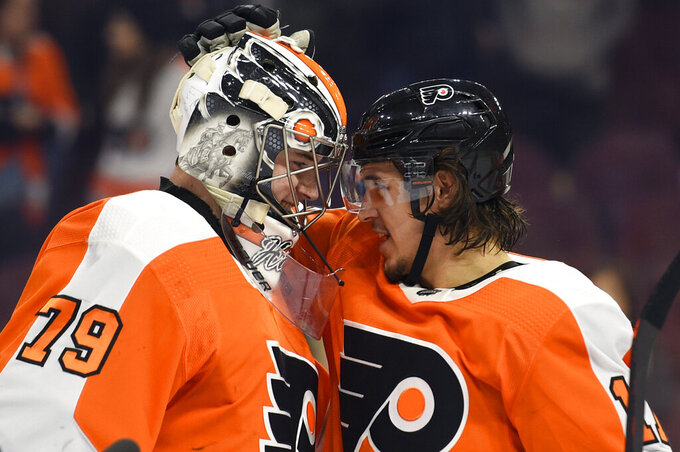 Philadelphia Flyers goaltender Carter Hart, left, is congratulated by Travis Konecny after a victory against the Dallas Stars on Thursday, Jan. 10, 2019, in Philadelphia. The Flyers won 2-1. (AP Photo/Derik Hamilton) 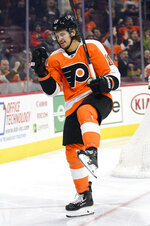 PHILADELPHIA (AP) — The vendor at the Flyers merchandise kiosk on the main concourse scrolled through his phone as disinterested fans breezed by the $70 Stadium Series sweatshirts and $250 jerseys that suddenly seem as unwanted as a face value ticket. Shortly before faceoff, customers! A Flyers fan stops by and spends $5.39 on a foam finger that is supposed to convey the home team is No. 1.

At least one Flyers fan in the stands had a different digit in mind.

The scoreboard cameras caught a man in the first period flipping Gritty the bird.

Yes, even the beloved Flyers furball can't escape the wrath of agitated fans in what has become one of the biggest debacles in franchise history. The only part of the season more surprising than the unexpected popularity of their rookie mascot has been the dizzying dip in the standings from a year ago. The Flyers crashed from a 98-point team that made the playoffs to the one of the worst teams in the NHL; they fired the coach, the general manager and play in front of a half-empty Wells Fargo Center where tickets bottomed out at $9 a pop on StubHub on Wednesday.

Hey, for a night, the discounted ducats were worth the price — the Flyers snapped an eight-game losing streak with a 2-1 win over Dallas.

But the win was just a rare respite for a franchise barreling toward the Feb. 25 trade deadline on the brink of another shakeup. The suit and tie guys are gone. General manager Chuck Fletcher was hired in November to replace Ron Hextall, who could not turn the Flyers into contenders after 4½ seasons, and he promptly fired coach Dave Hakstol after three-plus seasons without a playoff series win. Interim coach Scott Gordon is 4-7-2 in his brief tenure.

That leaves the aging veterans in the orange-and-black sweaters, and perhaps some of the newer faces, on the market as Fletcher decides if the time is now for a full-blown roster revamp. Former All-Star forward Wayne Simmonds is in the last year of his contract and could be traded before the Flyers lose him for nothing. Simmonds, who has only 19 points this season, is perhaps the most important voice in the locker room and losing his leadership would hurt the Flyers as much as his point production. Just 30, Simmonds could be packaged for prospects and picks to a contender before he hits free agency.

Hextall's inability to turn things around was among the reasons he was unexpectedly dismissed Nov. 26. Philadelphia hasn't won the Stanley Cup since 1975 and was ready to try to contend after several years of retooling.

How did it get this bad?

— Start in net. The Flyers tied an NHL record this week with Mike McKenna becoming their seventh goaltender to play this season. The Flyers became the fourth team in league history to hit that ignominious milestone and reached it in just 43 games. The Flyers banked on Brian Elliott and Michal Neuvirth to man the pipes while top prospect Carter Hart gained experience in the minors. Elliott and Neuvirth have been injured most of the season and patchwork effort was a bust, forcing the Flyers to call up Hart (3-4-1) last month to steady the team.

— The farm system had failed to produce stars after a string of bad drafts last decade and expected cornerstones such as Nolan Patrick (No. 2 pick of 2017 draft; 22 games without a goal), and defenseman Shayne Gostisbehere and Ivan Provorov have yielded inconsistent results instead of serving as significant keys to a rebuild.

— The vets have disappeared. Claude Giroux, the last holdover from the 2010 Stanley Cup final team, is again an All-Star. But Simmonds, Jake Voracek, van Riemsdyk and Sean Couturier have been hit by injury and inconsistency.

"When times do get tough, it's what's in our locker room that really matters and what really counts," Hart said.

The 20-year-old Hart will be the anchor and has been an instant fan favorite. He's been recognized a couple of times in public — he had to smile recounting a photo he took with an employee at a local Lululemon — but otherwise blends in like any other young kid walking a mall.

The Flyers have averaged more than 19,000 fans a game each season since 1996 but the crowd has thinned and ticket prices have hit rock bottom at the same time a $250 million renovation is underway at the Wells Fargo Center. It hasn't helped that the 76ers, a fellow tenant, pack the place every night.

"The winning side of it is a lot more fun than the losing side of it, but we can only deal with the circumstances that we have and right now," Gordon said.

Gritty has provided the Flyers a mainstream buzz they would have missed had it not been for his burst of supersized jersey full of fun.

Gritty kicked a field goal at a recent home loss blindfolded both in a nod to "Bird Box" and a shot at Chicago Bears kicker Cody Parkey. Flyers fans saved their loudest cheers for the skit and accompanying Eagles highlights.

Once play resumed, they could have used the blindfold.