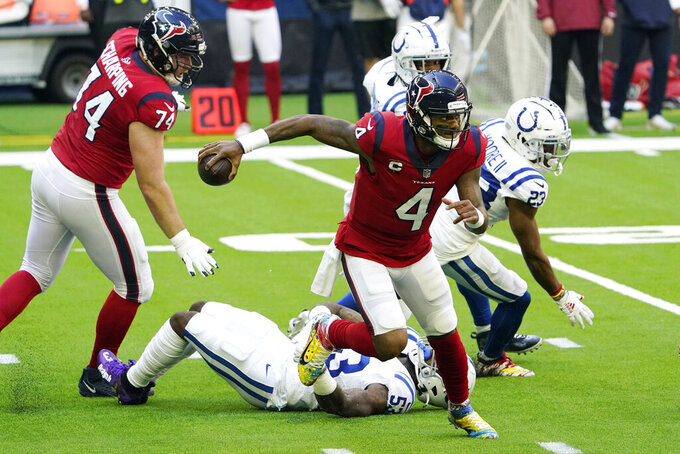 CHICAGO (AP) — The Chicago Bears went into the 2017 draft with their sights set on landing a franchise quarterback to serve as a building block for a struggling organization.

They could have chosen Patrick Mahomes. Or Deshaun Watson. They went with Mitchell Trubisky. And that decision remains a sore spot in Chicago.

The quarterback choice is getting even more attention there than usual with Trubisky and the freefalling Bears scheduled to host Watson and the Houston Texans on Sunday. It will be the first meeting as pros for the former ACC opponents — and another reminder of a decision gone wrong for Chicago.

General manager Ryan Pace traded up a spot to draft Trubisky out of North Carolina with the No. 2 overall pick. He passed on Mahomes and Watson, now two of the best quarterbacks in the NFL. Trubisky has regressed the past two seasons and is likely on his way out of Chicago after the Bears did not exercise their fifth-year option for next season.

One lingering question about that draft is why the Bears didn't seem to show much interest in Watson coming out of Clemson.

“I have no idea," he said. "I was just going with the flow and every process, and that’s pretty much it. Honestly, I don’t even know. Honestly, I wish I had more answers to that, but I don’t.”

Watson insisted he felt no extra motivation as he geared up to face the Bears, that there are no hard feelings. Fans in Chicago sure feel differently.

The Bears (5-7) are on a six-game losing streak, their worst since the 2002 team tied a franchise record by dropping eight in a row. Pace and coach Matt Nagy are feeling the heat, particularly after Chicago blew a 10-point lead in the closing minutes against Detroit last week.

Trubisky got benched during a Week 3 comeback win at Atlanta. He did not return to the starting lineup until a lopsided loss at Green Bay two weeks ago.

Trubisky committed three turnovers in that game, with Nick Foles sidelined by a hip and glute injury. He played better against Detroit, though a strip-sack deep in Chicago territory led to the Lions' winning touchdown.

Watson is second to Mahomes in yards passing. The two-time Pro Bowler has thrown for more than 300 yards in three straight games, though he went without a touchdown pass for the first time this season as the Texans lost.

“You know he was a winner coming from a winning program and he had a lot of experience and he was a dual threat guy that was able to throw the football but still beat you with his legs,” said Nagy, hired off Andy Reid's staff in Kansas City in 2018. “Competitor and a winner was what you saw. ... I think when you go back and you look at a lot of different people, everybody had their own opinions.”

Houston’s Keke Coutee had a career-high 141 yards receiving last week in the team’s first game since top receiver Will Fuller was suspended for violating the league’s policy on performance enhancers. The third-year player had fallen out of favor with former coach Bill O’Brien and rarely played earlier this season, but has gotten a second chance under interim coach Romeo Crennel.

“I just kept my head up, continued to grind,” Coutee said. “I know the person I am, so good things happen if you continue to work.”

The Texans also got a big game from Chad Hansen, who set a career mark with 101 yards receiving in his first game since 2017. Hansen, elevated from the practice squad on Dec. 5, was sent back this week despite his big game. But Crennel said he could be back on the active roster again before Sunday’s game.

The Bears ranked among the top 10 on defense for much of the season. They're now 15th overall.

Chicago got lit up for 460 yards by Detroit, with Matthew Stafford throwing for 402. And in Green Bay's romp the previous way, Aaron Rodgers threw for four TDs.

Inside linebacker Tyrell Adams hadn’t made much of a contribution in his first four NFL seasons. But this year he’s become a key member of Houston’s defense with his work since stepping in for Benardrick McKinney after McKinney sustained a season-ending shoulder injury in Week 4.

Adams has started the last eight games and has had more than 10 tackles in five of them. He has 91 tackles this year, compared to 34 in his first four seasons combined.

At least the Bears' ground game is perking up.

Chicago ran for 140 yards last week after gaining 121 against Green Bay. The Bears went seven straight games without reaching triple digits prior to that. David Montgomery had 72 yards and two touchdowns last week after running for a season-high 103 yards against the Packers.