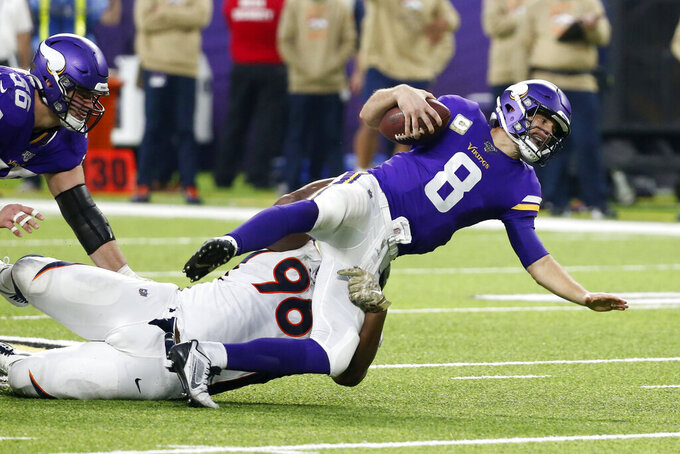 So, they went to dinner upon their return.

The entire team. For some table talk they hoped would bear fruit. With Von Miller delivering a few words.

Basically, the veteran pass-rusher gave his teammates food for thought: Keep sticking together even after their 27-23 meltdown in Minnesota. It wasn’t Miller sugarcoating their 3-7 record so much as making some general observations.

His message hit the spot.

“He was like, ‘Hey guys, the energy that we had in practice that week? The energy we had in the game? Let’s keep it going,’” recounted defensive back Will Parks, whose team plays in Buffalo on Sunday. “It was one of the best things I’ve seen in all my football life. It was pretty cool.”

Although the Broncos have dropped five games this season by eight points or fewer, the one Sunday was particularly painful. They led 20-0 at halftime, only to see Kirk Cousins and the Vikings storm back. Denver became the first team in five years to blow a halftime lead of 20 or more points.

Instead of walking on eggshells around the subject, the Denver players cleared the air. They showed up at the restaurant, went into the back room, pushed some tables together and chatted.

“It was super therapeutic,” said safety Justin Simmons, who turned 26 on Tuesday. “For us, obviously, it’s all about wins. But Von got up there and he’s like, ‘Let's build from this and stay together as a unit.’ That was the message. It was good.”

The dinner conversation wasn’t all about dissecting what went wrong against the Vikings. Instead, it was a chance to check in with teammates.

“It’s like, ‘How’s the family doing? You OK?’” Parks said. “We mentioned it here and there, but it wasn’t designed to talk about the game. It was more designed to keep guys in it, keep guys into this coaching staff, into the culture that’s trying to be built around here — that ultimately will win football games. That Sunday night (dinner) told us a lot about our team.

“The culture here now is like, ‘We’ve got a good team. We’ve just got to find ways to squeak it out.’”

Linebacker Todd Davis believes the defense is just starting to catch on to all the nuances of head coach Vic Fangio’s intricate schemes. That’s why he wants to see the entire unit return in 2020. Defensive lineman Shelby Harris, cornerback Chris Harris Jr., Simmons and defensive end Derek Wolfe are all on the final year of their deals.

“I do think we have something special here if all the guys can stay,” Davis said. “If we have this defense for another year, understanding how Vic wants things run, I think we would be phenomenal.

“We could be really special. We’re striving to get there week in and week out.”

Denver has the fourth-ranked defense (310.8 yards per game) even after allowing 20 points in the fourth quarter. One of the biggest miscommunications Sunday was when Stefon Diggs took advantage of blown coverage for a 54-yard TD with 10:21 remaining.

“It’s just self-inflicted and it’s something that we’ve just got to fix,” Chris Harris said. “You don’t want to have those same issues lingering two weeks in a row.”

And that was part of the reason for the dinner.

“Everybody was upbeat — still a little upbeat — but for me, I’m always mad when we lose,” Harris said. “I don’t like to lose at all — no matter how we lose and how fun it was early. It was fun but losing is not me.”

NOTES: The Broncos signed TE Orson Charles on Tuesday and placed FB Andy Janovich on injured reserve with an elbow injury. Charles played last season for the Cleveland Browns. ... As a present for his 26th birthday, Simmons’ wife gave him a therapeutic hot tub. “She hooked me up,” said Simmons, who’s taken 1,645 consecutive defensive snaps since 2018.

By Dennis Waszak Jr. 6 minutes ago
By John Wawrow an hour ago
2 hrs ago
By Josh Dubow 10 hrs ago
13 hrs ago