On Football: Sharks are circling around Patriots 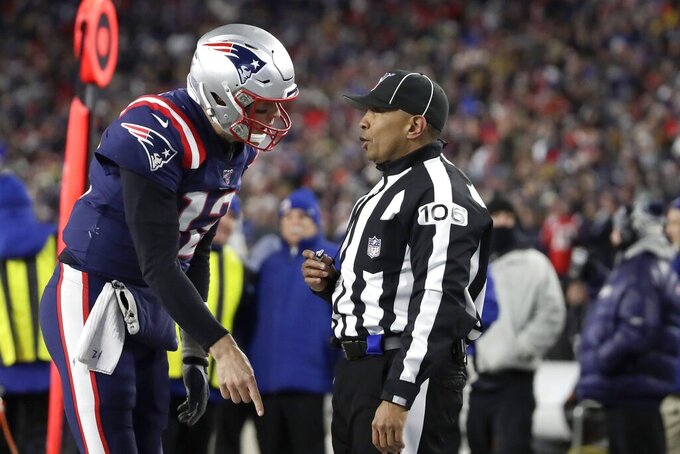 New England Patriots quarterback Tom Brady appeals to down judge Patrick Holt that wide receiver N'Keal Harry had scored a touchdown in the second half of an NFL football game against the Kansas City Chiefs, Sunday, Dec. 8, 2019, in Foxborough, Mass. Harry was ruled out of bounds before he crossed the goal line. (AP Photo/Elise Amendola)

It might be freezing in New England. That won't stop the sharks from circling around Foxborough.

Criticism of the Patriots is more fair right now than usual. They have lost two in a row, not looking like a championship team in either defeat. For sure, at 42 Tom Brady has taken a step backward, which anyone who has won six Lombardi Trophies is entitled to.

And the air of invincibility at Gillette Stadium has been compromised severely by Kansas City. The Chiefs made enough mistakes to lose to a New York team, never mind to New England, yet escaped with what surely will be an uplifting victory for them.

Hey, Bill Belichick has been outcoached in all three of his team's defeats; yep, the Patriots are 10-3 even with all the doomsday gloom directed their way. Actually, if you examine his body of work real closely, you'll find enough examples of Belichick being outsmarted or off-kilter, including in Super Bowls lost and won.

We're sure to hear very loud proclamations this week of the Patriots being done. We've heard and read such evaluations before, including when they went 11-5 in 2018 — all the losses were on the road — and had to play the AFC championship game in Kansas City.

Let's not jump to conclusions just yet.

"I don't want to make any predictions," Brady said after the 23-16 loss that pushed the Patriots basically two games behind Baltimore (11-2 with a win against New England) in the overall AFC scheme. "I don't think that's — I think we come in with a plan to get better every week and try to win each game. Each game takes on a little different feel and the situations are a little different, and it's a different team every year, too.

"So, I may have certain experience doing things, but this particular team as a whole hasn't been through different situations. So, you just try to work through them over the course of the whole season, and we have three big games to go, and we've got to get back to winning football."

That figures to happen next week at Cincinnati, yet another weak opponent on this year's schedule. The Patriots really have faced only three strong teams at the times they met — Buffalo, Baltimore and Houston — and lost two of those games. They take on the Bills in their 15th game and, could it be, actually could lose the AFC East for the first time in who can remember should they drop that one.

Then again, they could win out, which is more likely, and get at least a first-round playoff bye. The AFC is weak enough that division winners can feast on the weaklings and make the postseason no matter how they fare against the better teams.

What should concern Brady and company is that opponents aren't likely to fear them, even in Foxborough, this winter. We already know from past experiences that the Ravens don't; there isn't another team or coach that carries more swagger into the Patriots' home than Baltimore and John Harbaugh.

Buffalo, even in its loss Sunday to the Ravens, showed a ton of moxie it would do well to bottle for its trip to New England. Houston, even with its monumental flop Sunday at home against Denver after seemingly getting over the hurdle it kept stumbling on against the Patriots, has to be emboldened should it face the Patriots in January.

Certainly the Chiefs will be. No, they aren't as strong as last year — the defense is better but possibly not improved enough to make a Super Bowl, and the offense is imbalanced. That shouldn't diminish the significance of Sunday's victory.

What surely is fair is to look at is the NFC and recognize that New Orleans, San Francisco, Seattle and Green Bay are formidable. And, yes, we'll say it right here, all of them are better than the Patriots at this time.

San Francisco took huge steps in a tight loss at Baltimore and then in this weekend's victory at New Orleans, a game to rival Seahawks-49ers of last month for best game of the season. Seattle, despite its loss at the Rams, is capable of outplaying and outmuscling anyone. The Packers have as much balance as anyone. Oh yeah, they also have Aaron Rodgers.

What do the Patriots have? Lots of maneaters ready to pounce. Can they fend them off yet again?