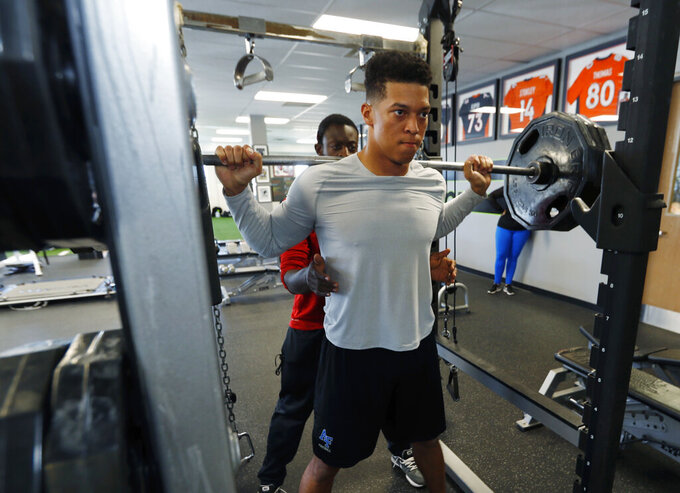 FILE - In this Feb. 16, 2017, file photo, Air Force wide receiver Jalen Robinette takes part in a drill to prepare for the NFL Combine at a workout facility in Centennial, Colo. Two years after the U.S. Defense Department thwarted his plans of going straight from the Air Force Academy to the NFL, Robinette is determined to turn that detour into a dream delayed as he approaches the fulfillment of his two-year commitment of active duty. (AP Photo/David Zalubowski, File)

DENVER (AP) — Two years after the U.S. Defense Department thwarted his plans of going straight from the Air Force Academy to the NFL, Falcons all-time leading receiver Jalen Robinette is determined to turn that detour into a dream delayed, not dashed.

Close to fulfilling his two-year active-duty commitment, Robinette recently competed in Ohio State's pro day, where he caught passes from quarterback Dwayne Haskins and glances from pro scouts intrigued by the muscular 25-year-old who hasn't played since 2016, when he led the nation with a 27.4-yard average.

"I think that day was pretty much a win for me as far as, first of all, being there," Robinette told The Associated Press by phone from Nellis Air Force Base in Las Vegas, where he's a logistics flight commander for the 58th Rescue Squadron. "It looked like 100 people that were there from the NFL.

"Just being there and to have eyes on me, especially after laying low for the last two years, was awesome," Robinette said. "And I think from a performance stance, I did pretty well. I looked pretty smooth. I feel really good about it."

Robinette told teams he expects to be available full time by August or September but has saved up vacation days to be able to attend offseason training programs, minicamps and training camps to show his hiatus from football wasn't a hindrance.

Robinette was the first Air Force player ever invited to the East-West Shrine Game, the Senior Bowl and the NFL scouting combine. He also expected to be the first one ever to go straight into the pros like standout Navy quarterback Keenan Reynolds had done a year earlier when he was drafted by the Baltimore Ravens.

That year, the DOD revised its pro sports policy, allowing graduates of service academies to apply for Ready Reserve so they could begin their pro sports careers immediately.

Robinette maintained a full class load his final semester while commuting 100 miles six days a week to train with other NFL hopefuls, including Christian McCaffrey, at Landow Performance, a facility in suburban Denver owned by Loren Landow, who is now the Denver Broncos strength coach.

Robinette was projected as a mid-round selection in 2017 but went undrafted after learning he would have to fulfill his two-year active duty commitment after all. He was told as the first round was underway that Air Force leaders had informed the academy that cadets would still be required to serve at least two years on active duty. That was a precursor to an official reversal of the DOD's pro sports policy shortly after Jim Mattis was appointed secretary of defense.

The Pentagon said graduates from military academies receive their educations at taxpayer expense, so prospective professional athletes would have to follow in the steps of Roger Staubach, Chad Hennings and David Robinson and first serve their country.

Robinette insists he wasn't embittered by the policy reversal .

"I wasn't raised that way, to carry a grudge, to be bitter about something like that," Robinette said.

He had the same outlook after his commission and graduation were subsequently delayed by several months.

"Absolutely, it was another part of my path," Robinette said. "Because I was associated with someone who was in an open investigation, I was a witness and with that going on, the academy felt that until that played out, I had to stay there in close range until things got settled down or they figured out what was going on."

Meantime, Robinette was invited to minicamps with the Bills and Patriots but neither team signed him with his two-year active-duty commitment looming.

He received his commission and graduation on Sept. 7, 2017, and was stationed at Nellis, where he said he was determined to grow as an Air Force officer and train in his spare time to keep his NFL dream alive.

At first he was only able to lift weights and do some speed work, but this year he began training with the 58th Rescue Squadron, which has its own workout facility because its tasks are so arduous.

"So now I have a full field where I can work on route running, agility drills, stuff like that," he said.

A week before Ohio State's pro day, Robinette went back to Colorado Springs for Air Force's pro day, where his trainer clocked him at 4.53 seconds in the 40-yard dash, nearly a 10th of a second faster than his 4.62 clocking at the NFL combine two years ago.

Even though he'll need to shake some rust off his game, Robinette said, "people are always developing in the NFL." Besides, he said he's a better prospect now for having spent the last two years focusing on growing as an officer and a teammate.

He'll gladly pack weight onto his 6-foot-3, 220-pound frame if somebody sees him as a tight end prospect instead of a receiver: "Heck, if you need me to put my hand in the ground and play tackle, I'm fine with that."

"My goal is just getting a shot," said Robinette, who already has the answer for any team wanting to know why it should take a chance of a guy who's been out of football for two years: because he's been serving his country, growing as a leader and following the chain of command.

"I'll say, 'I can still play at a high level, I'm very coachable and really able to buy into an organization and their mission and goal,'" Robinette said. "You don't have to worry about me being a knucklehead."