Former Colts punter hopes to find his voice on television 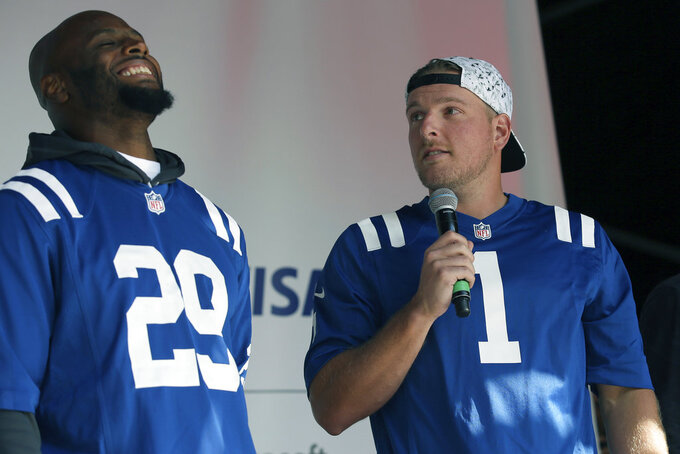 FILE - In this Oct. 1, 2016, file photo, Indianapolis Colts punter Pat McAfee, right, and Colts safety Mike Adams joke on stage during an NFL fan rally on Regent Street in London. McAfee successfully took his comedy routine from the Colts' locker room to the stage. Now the former punter hopes to get his kicks through a new medium _ television. McAfee hopes to become the first ex-punter to do on-air work for Fox Sports. (AP Photo/Tim Ireland, File)

He thought about the 27 death threats he received after missing a couple of costly kicks during one game in college. He felt horribly for the friend who sometimes slept on his floor when they were training camp teammates in 2014 with Indianapolis. And then McAfee, the Colts' former punter, contemplated how he would have described the situation to a television audience.

The descriptions are something McAfee has thought about a lot lately as he embarks on the next chapter of his post-NFL life — and perhaps his most daring venture yet.

In a world full of Super Bowl-winning quarterbacks, record-breaking running backs and receivers and popular pass rushers rife with star power and brand-name recognition, McAfee hopes to become the first ex-punter to do on-air work for Fox Sports.

The list of specialists on network television is short. Former punter Dave Jennings, former kicker Morten Andersen and former long snapper Dale Hellestrae all did broadcast work for NFL Europe. Hellestrae even did some work for Fox in 2006. Jay Feely, a longtime kicker, currently works for CBS and Fox employed center and long snapper Trevor Matich in 1997 and 1998. Matich now works for ESPN.

But McAfee offers a different perspective.

He promises to bring the wisecracking personality that has turned him into one of Indy's popular and prominent former players with intimate knowledge of all facets of the kicking game.

Plus, his experiences as a punter, placekicker, kickoff specialist and emergency quarterback help him understand the high stakes and emotions involved when players such as Parkey step onto the field with the game on the line.

McAfee's experiences could help in the transition.

After successfully taking his comedy routine from the locker room to the stage and hosting his own radio show on Barstool Sports, a gig he left in August, he's taping six podcasts per week and running his own small business, Pat McAfee Inc. Yet he wants to add color commentating to the mix.

In November, he made his debut at the Texas Tech-Baylor game and made his pro debut during Green Bay's regular-season finale against Detroit — a game that played into McAfee's strengths when kicker Matt Prater threw a touchdown pass. McAfee responded by immediately changing the inflection of his voice and describing in detail, what Prater saw, and why he reacted the way he did.

"That was a gift from the football gods," McAfee said. "I've spent the last two years waiting for a big special teams play so I could do a voiceover on my phone. I was doing a lot of cool stuff with the football (when I played) and the color commentator had no idea what was going on because it's usually a star quarterback or something. I got lucky with a magical play."

So far, Fox is the only network to give McAfee an audition.

But those who have seen McAfee's work believe he provides a quality others don't — football with a twist of comic relief — and rare insight into some of the biggest moments of games.

"I've been watching games a lot differently lately and with a little more understanding than I've had of what it takes (in the booth)," McAfee said.

"But that moment with Cody Parkey was pretty big and I think I would have gotten a little emotional about it. I look forward to watching the Cody Parkey vengeance story next year."