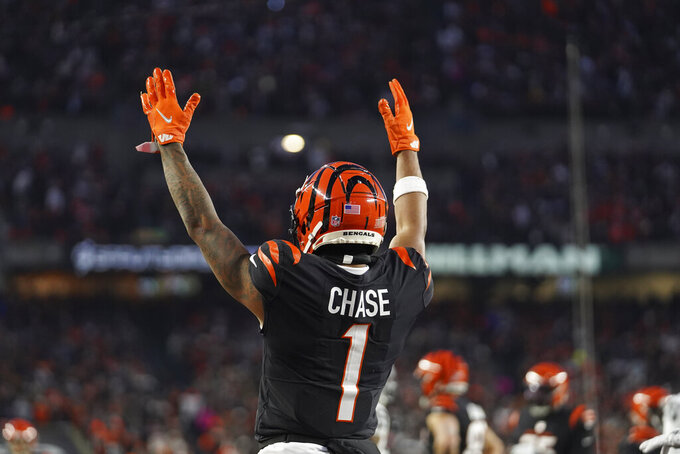 Cincinnati Bengals' Ja'Marr Chase signals for a touchdown on a ball caught by Tyler Boyd during the first half of an NFL wild-card playoff football game against the Las Vegas Raider, Saturday, Jan. 15, 2022, in Cincinnati. (AP Photo/Jeff Dean)

“We developed this because there’s no one in this space that looks like me, right?” Hasty told The Associated Press. “And there’s no one in this space that’s a former athlete. And so we understood through our research and development that there’s a need for this because in most walks of life, there’s folks that are trying to meet certain standards in terms of diversity, and we know that those standards are still being pursued even in the search firm world. But if there’s no one that actually understands sports, if there’s no one that understands the science of sports and that hasn’t played the game, you’re going to find some huge gaps in terms of understanding what it takes to really identify folks that are talented in the coaching world.

“So we took it upon ourselves to develop an algorithm that we felt would now allow us to sort through the coaches and also allow us to track and follow those coaches throughout their career and really understand. We’ve got a database here of over 1,600 coaches, and we can track and follow their progress throughout their career so that when the opportunity becomes available for them in the pipeline of coaching opportunities, we know and we can identify those coaches very early on, a year to two years out.”

Facing off against each other in the NFL playoffs?

“I don’t think we both imagined it would be like this, to be honest,” Fulton said with a smile.

Teammates together at Archbishop Rummel High School in Metairie, Louisiana, they played on LSU’s 2019 national championship team with Cincinnati quarterback Joe Burrow. Fulton left college a year early and wound up being drafted in the second round by the Tennessee Titans. Fulton started 13 games this season. Chase sat out 2020 during the coronavirus pandemic, then became the fifth pick overall last spring.

“He’s having a hot year,” Fulton said. “I just want to do my best to make sure he doesn’t have one of those big games. ... Just want to stick to the game plan, whatever we got going. Just try to slow him down for sure.”

The friends remain close and talk regularly through the season. Not now, though, with Chase and the Bengals visiting Fulton and his top-seeded Titans on Saturday.

“We’re shutting it down this week,” Fulton said.

Lazard credits his improved second-half production in part to changes he made off the field that included altering his diet, improving his sleep habits and reading more often.

Lazard concedes he’s not nearly as voracious a reader as teammate Aaron Rodgers, who recommends a different book on each of his weekly appearances on “The Pat McAfee Show” on YouTube and SiriusXM. But he has started reading more lately and mentioned Sadhguru’s “Karma: A Yogi’s Guide To Crafting Your Destiny,” and Howard Falco’s “I AM: The Power of Discovering Who You Really Are” as two books that have caught his attention.

Ravens defensive backs coach D’Anton Lynn will be the head coach of the East team and Colts offensive coordinator Marcus Brady will handle the West in the Shrine Bowl on Feb. 3.

The 97th East-West Shrine Bowl, which features some of college football’s best prospects, will take place at Allegiant Stadium in Las Vegas, the same venue that will host the NFL Pro Bowl three days later.

“The East-West Shrine Bowl provides current NFL coaches the opportunity for development, evaluation, and exposure,” says Troy Vincent, the league’s executive vice president of football operations. “The venue affords coaches experience in roles that are beyond their current coaching responsibilities. We look forward to two talented coaches in our pipeline, Coach Marcus Brady and Coach D’Anton Lynn, stepping into head coaching roles for the game and developing and displaying their leadership skills during the week.”

Lynn is an eight-year coaching veteran who just completed his first season as defensive backs coach in Baltimore. He spent the previous three seasons with the Texans, serving as secondary coach (2020) and assistant secondary coach (2018-19). He is the son of former Chargers head coach Anthony Lynn.

Brady just completed his fourth season with the Colts and first as their offensive coordinator. He previously served as quarterbacks coach (2019-20) and assistant QB coach (2018).