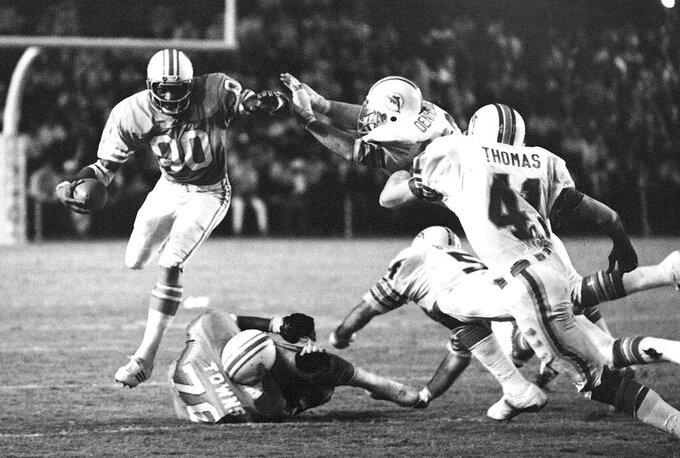 FILE - Miami Dolphin defenders Vern Den Herder and Norris Thomas (41) go after Houston Oilers wide receiver Ken Burrough (00) during the first half of an NFL football game Dec. 24, 1978, in Miami. Burrough, who was the last NFL player to wear No. 00, died Thursday, Feb. 24, 2022. He was 73. Burrough's family announced the death, saying died at his home in Jacksonville, Fla. (AP Photo, File)

HOUSTON (AP) — Ken Burrough, the former Houston Oilers receiver who was the last NFL player to wear No. 00, died Thursday. He was 73.

Burrough's family announced the death, saying died at his home in Jacksonville, Florida.

Burrough was the 10th overall pick in 1970 by New Orleans, but played just one season for the Saints before being traded to the Oilers. He spent the next 11 seasons in Houston, where he was selected to the Pro Bowl in 1975 and 1977.

Burrough led the NFL in receiving yards in 1975 with a career-high 1,063. He piled up 6,906 yards receiving and 47 touchdowns with the Oilers, helping lead them during their Luv Ya Blue period where they twice reached the AFC championship game. The Oilers are now the Tennessee Titans.

“Kenny provided the aerial threat and the big plays for Bum Phillips’ Oilers teams, leading the league in receiving one season and earning two Pro Bowls over his 11 seasons in Houston,” Titans controlling owner Amy Adams Strunk said in a statement from the team. “At the time of his retirement, he was the franchise leader in career receiving yards and he still ranks third currently. I will fondly remember his distinctive double zero jersey racing down the field on another long touchdown.”

Strunk added that Burrough attended the most recent reunion of former Oilers and that she enjoyed seeing him reminisce with his teammates.

Burrough was the last NFL player to wear No. 00 as the league restricted the use of Nos. 0 and 00 in 1973, but allowed players who already had those numbers to retain them until retirement.

Burrough grew up in Jacksonville, starring at William M. Raines High School. He played football and ran track at Texas Southern, and was selected to the Black College Football Hall of Fame in 2016.