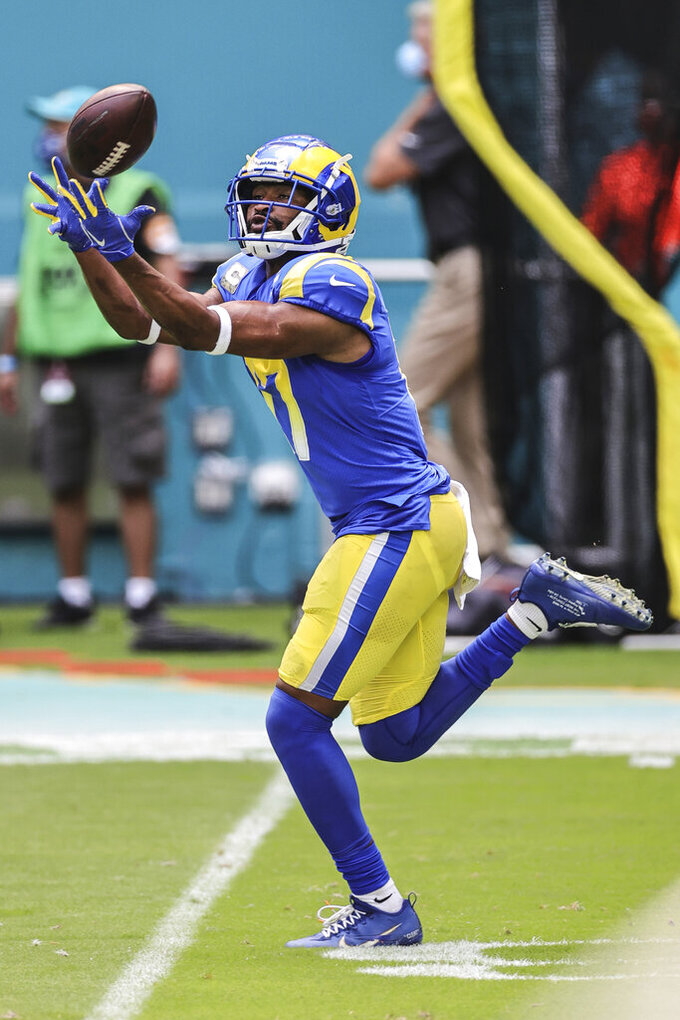 Los Angeles Rams wide receiver Robert Woods (17) catches a pass during warm-ups prior to an NFL game against the Miami Dolphins, Sunday, Nov. 1, 2020 in Miami Gardens, Fla. The Dolphins defeated the Rams 28-17. (Margaret Bowles via AP) 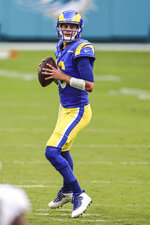 The coach who revolutionized offensive football for the Rams when he arrived in town now presides over a squad being carried by its defense.

The innovative tactical mind that inspired countless copycats and propelled his offensive disciples to head coaching jobs of their own is now trying to coax consistency from many of the same offensive players who were here in 2017. McVay is also marveling at the work being done by his newest rising assistant, wunderkind defensive coordinator Brandon Staley.

Los Angeles (5-3) is an NFC contender yet again because of Staley's defense — and because the offense can still move the ball, ranking sixth in the league in total yards (396.4). But because LA can't finish those drives with consistent points, the spotlight on Jared Goff and his playmakers is growing.

“The big theme for us is consistency throughout the course of games,” McVay said Monday after returning from a bye week spent studying football film, catching up on sleep and watching “This Is Us” with his fiancée.

“Score more points,” McVay added. “Let's execute at a higher level, because I believe we're capable of it. We want to learn from those first eight games, but there's a lot we can do at just a more consistent, more explosive level.”

McVay's simple diagnosis is well-founded. The Rams are 21st in the NFL with 24.1 points per game, and offensively woeful Chicago is the only team with a winning record that scores less often.

Los Angeles can’t rely so heavily on its defense in the second half of the schedule when the Rams face several elite offenses, including five games against the NFC West and a road date with Tom Brady's Buccaneers.

Starting with better red-zone execution, McVay and Goff have to finish those long drives with points instead of turnovers. Receiver Cooper Kupp believes the Rams have the players and scheme to do it.

Aaron Donald remains the most destructive force in the NFL, and the multi-time All-Pro defensive tackle appears to be playing as well as he ever has. He had nine sacks in the first eight games, and there's no reliable quantifier for the upheaval he causes on countless plays when he records no stats. If he stays at this level, Donald has a strong shot to be the NFL's Defensive Player of the Year for a third time.

Blocking strategies and play calling against pressure. Miami zealously blitzed Goff for eight quarterback hits in LA's last game while batting down six passes at the line and forcing four turnovers by the quarterback. Goff didn't get nearly enough help from his blockers. Every upcoming Rams opponent will watch the Dolphins' zero-pressure schemes, which use no deep defenders and gamble on the ability to get to Goff before he can make a play.

Safety John Johnson is making it tough for the Rams to let him go. The fourth-year pro has become an integral part of Staley's defense, calling its plays on the field and ranking second with 53 tackles and five passes defensed. Johnson will be a free agent after this season, and the Rams have Taylor Rapp and rookie Jordan Fuller theoretically ready to take over at safety. But Johnson is demonstrating his worthiness for an extension if this cap-strapped team can find the cash.

Goff faces an important stretch of his career over the next eight games. He started solidly this season, but slipped into a trough of unproductivity with five turnovers and a dismal 58.3 completion percentage over the last three games. Goff's four-year, $134 million contract extension begins next year, and he's eager to prove the Rams are getting their money's worth.

The Rams are fairly healthy, and Fuller was designated to return from injured reserve Monday after playing in one game since Sept. 20 due to a shoulder injury. He'll be joined by defensive tackle A'Shawn Robinson, who is ready for his long-awaited Rams debut, McVay said.

26 — The number of points allowed in the second half by the Rams' defense through eight games, including just two touchdowns — both scored by Buffalo. That's winning football.

The NFC West race gets real Sunday with a visit by the Seattle Seahawks (6-2) to SoFi Stadium, where the home team is still unbeaten. A win would give a share of the division lead to the Rams, but a loss would suggest they're not ready to challenge Russell Wilson and Pete Carroll this season.