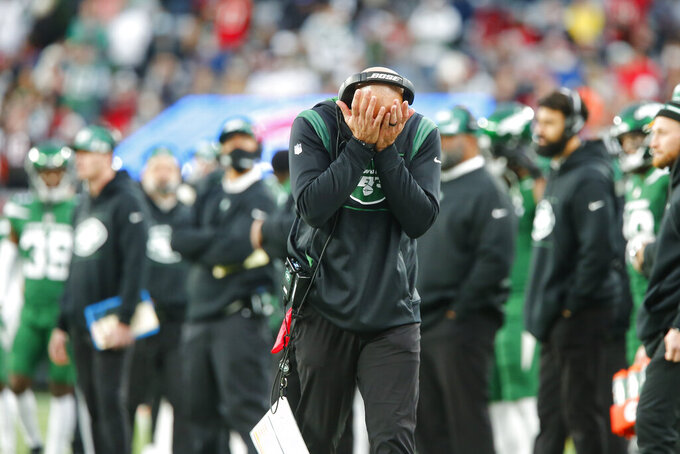 EAST RUTHERFORD, N.J. (AP) — Zach Wilson and the New York Jets were 2 yards away from sealing an unlikely victory.

Miscommunication and/or lack of execution — and Tom Brady, as usual — sent them to another loss.

Wilson was stuffed on fourth-and-2 at the Buccaneers 7 for no gain, and Brady rallied Tampa Bay back with a 33-yard touchdown pass to Cyril Grayson with 15 seconds left to beat the Jets 28-24 on Sunday.

“There was a lot of things that I thought was fantastic from our group against a championship football team,” coach Robert Saleh said. “And, um, they deserved better.”

The Jets (4-12) appeared on their way to what would have been a stunner against a team that has its sights set on making another Super Bowl run. The Buccaneers (12-4) were down big and dealing with a shirtless Antonio Brown walking off the field in the middle of the game.

New York led by two touchdowns in the second half, and was up 24-20 when the Jets faced a crucial decision. The Jets could've kicked a short field goal to go up by a touchdown. Instead, with the Buccaneers out of timeouts, the Jets decided to go on fourth down for a chance to put the game away.

“It’s unfortunate that we’re going to be talking about the last sequence of events there,” Saleh said, “but I thought our guys were outstanding today."

Except when it mattered most.

Saleh said the play should’ve been a reverse to wide receiver Braxton Berrios, but Wilson had the option to sneak it based on the look. Wilson pushed forward and was stopped for no gain.

“In that situation, we wanted to ball handed off to Berrios, but we did a very poor job as a coaching staff communicating that in the huddle,” Saleh said. "Zach executed the playbook as it's designed. Unfortunately, if you look at the copy or the TV copy, Braxton probably has a first down and the game is over.

“Poor job on our part for the lack of communication.”

Instead, Brady got the ball back with 2:12 remaining and marched the Buccaneers down the field for the winning score. He improved to 31-8 against the Jets in his career, with this his first win against them with Tampa Bay.

It was also the first time the Bucs won on the road against the Jets, upping their record to 1-7.

“Yeah, we got the play call and I liked it just because it has two different options,” Wilson said. “Right there, I was just thinking to do my job and we had an open A-gap there and unfortunately came up short.”

The rookie quarterback, who played another mostly solid game going 19 of 33 for 234 yards and a touchdown, confirmed he had the option to look at what the defense was giving him and “if it was there, to keep it, and if it wasn’t, to hand it off.”

Berrios, who caught a touchdown pass and ran for another, supported Wilson's call on the play despite the outcome.

“I fully trust 2 (Wilson) in whatever he does and whatever decision he makes,” Berrios said. “He sees the game through a different lens than I do, and a different angle than I do. My full trust is in 2 and if he makes that call, then I’m riding with that call.”

Saleh insisted the blame should be placed solely on the coaches and not Wilson, who received the call from offensive coordinator Mike LaFleur.

“That’s Mike to Zach,” Saleh said. “It’s simple. He calls the play and says, ‘Hand this ball off, no matter what.’ That’s all the communication that needs to be said. It never got across. Zach executed the playbook as designed.”

Wilson appreciated Saleh telling him and the players that the game was shouldered by the coaches.

“I think everyone’s just being a little hard on themselves, obviously because of what happened,” Wilson said. “I think, just from an offensive perspective, we just have to execute the play that was called. They’re learning for next time. If next time, they really do want that handed off, then we’ll communicate that. I just think when something doesn’t work out, it’s easy to say after the fact.”

Either way, it resulted in another loss in a season filled with them.

But the fact the Jets led by two touchdowns late in the third quarter against the defending Super Bowl champions and a quarterback they've always had a tough time beating gave New York a sliver of optimism moving forward.

“There’s no moral victories in this league, but nobody in our circle flinched,” linebacker C.J. Mosley said. "That’s all you can ask for. You can’t win every two-minute possession, you can’t win every single game, but we sure did our best. Guys executed well. Offense, defense and special teams played well. We played physical. We communicated. We adjusted on the sidelines.

“So, it’s just unfortunate that we came up short at the end.”