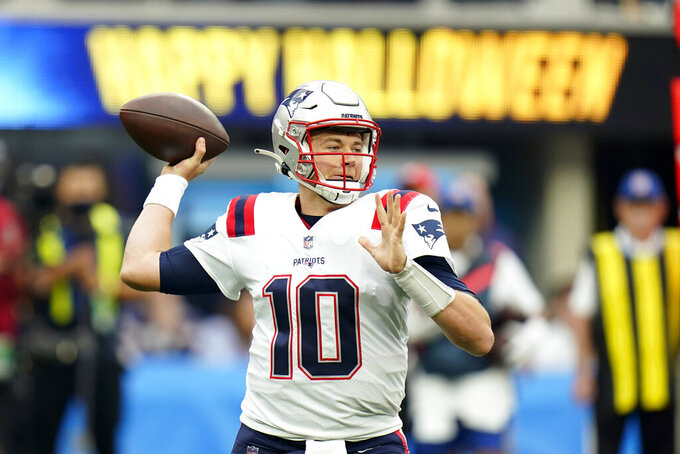 Fox Sports could have had one of the more intriguing games of the week with Green Bay visiting Kansas City — until Aaron Rodgers went into the NFL's COVID-19 protocol, ending a potential shootout with Chiefs quarterback Patrick Mahomes.

Fox is taking its pregame show on the road, though, for its annual salute to the military for Veterans Day.

This year’s salute will take place from the United States Naval Academy in Annapolis, Maryland, marking the second time in three years the show is taking place from a military academy. Fox visited the U.S. Military Academy at West Point in 2019.

“I think there’s something special when it is in front of the students. They have such tough days, and this is just kind of a day off for them to have fun with the guys and to be part of it,” Fox NFL Sunday producer Bill Richards said.

One of the features on Sunday’s two-hour pregame show is about New England Patriots coach Bill Belichick and his family’s history with the academy. Belichick’s father, Steve, worked there as an assistant and scout for over 30 years, and the Belichick Library in the Academy’s football complex is believed to have one of the most extensive collection of football books outside of the Pro Football Hall of Fame.

The “Fox NFL Sunday” crew of Terry Bradshaw, Curt Menefee, Howie Long, Michael Strahan, Jimmy Johnson and Jay Glazer will get to experience many different aspects of life at the Academy along with getting to interact with the Midshipmen during the day.

Besides the pregame show, the halftime and postgame shows will also originate from the Academy.

“For our group and all the people that make our Sunday show happen, it’s their favorite thing to do,” Long said. “I think it’s a great reminder of all the sacrifice that many have made over the course of the history of our country.”

“To me personally, just the style of the offense, and I’m saying this very lightly because I know he is nowhere near as smart of a player as Tom Brady, but man, at times he does look like a young Tom Brady,” said Reddick, a five-year NFL veteran. “Take that for whatever you want to take that for, but he definitely is a solid football player.”

Jones has the Patriots at 4-4 entering Sunday’s game at Carolina.

Bills second-year kicker Tyler Bass, who was selected the AFC’s special teams player of the month on Thursday, noted he was wondering about paying off his student loans from attending Georgia Southern before the Bills selected him in the sixth round of the 2020 draft.

Bass said the debt keeps him grounded and motivated him to make the team, which he did in supplanting Stephen Hauschka to start his rookie season.

“It’s a constant reminder about how much sacrifice went into it and I put into it,” Bass told The Associated Press. He ranks second in the NFL with 71 points, having hit 16 of 17 field-goal attempts this season, and 44 of 51 overall.

Bass now has a four-year contract worth $3.475 million.

Asked if he needs to have a conversation with Bills GM Brandon Beane to cover his expenses, Bass replied: “No. I’m happy with what I got. I’ll figure it out.”

Cincinnati quarterback Joe Burrow has learned that all interceptions in the NFL are not created equal.

The second-year star has thrown nine picks, tying him with three other players for second most in the NFL. He’s tossed at least one in six of the Bengals’ eight games this season.

And he’s not all worried about it.

Now, Burrow said, is not the time to dwell on exactly how they all happened.

“That’s kind of film study after the season where you go back and watch sack tapes and interception tapes and really comb through all that at the end of the year,” he said.

Burrow also happens to be third in the league with 20 touchdown passes.

The Bengals (5-3) host the Cleveland Browns (4-4) in a crucial AFC North clash on Sunday.

Michaels is a Pittsburgh native and son of a veteran. Bleier lost part of his right foot serving in the Vietnam War after his rookie season with the Steelers. He returned to the team in 1970 and sat out a year because of his injuries. He played 10 more seasons and ran for 1,036 yards in 1976.

Salute to Service is an annual NFL initiative that honors service members, veterans, and their families. Before the game, Michaels, Bleier and the Steelers' fan of the year, Army veteran Nelson E. Lowes, will conduct the ceremonial “Terrible Towel” twirl. The Steelers and Bleier will also be honoring Michaels’ late father, veteran Wally Sychak, with a dedication and donation to his VFW hall.

“I could not be more honored to be on “Monday Night Football" at Heinz Field standing by Rocky Bleier and Nelson Lowes, saluting our veterans and service members around the globe,”

Michaels, who is currently on his “Nothin but a Good Vibe” tour, often invites service members and first responders to be recognized on stage during his performances. He also meets with active duty service members and veterans before his shows and at military events such as the Military Child of the Year event.

Matt Birk, a six-time Pro Bowl center during a 15-year career with the Minnesota Vikings and Baltimore Ravens, has put together through his H.I.K.E. Foundation a team of educators, business professionals and entrepreneurs to create Pursuit Academy, a unique program for fourth-grade students.

“Kids these days are stressed, depressed, exam-obsessed and social media-possessed,” Birk said on the AP Pro Football Podcast. “And so what Pursuit Academy does is it really teaches kids how to be entrepreneurs of their own lives. Life doesn’t go in a straight line. There’s going to be all sorts of things, twists in the road, adversity. Education is designed to help kids have a great life, not just about getting into college. Of course, they need to learn basic skills, but Pursuit Academy, we have skills that we think every child needs to learn.”

The program teaches six essential skills to empower kids to create a path that enables them to pursue their best lives.

Pursuit Academy has already been piloted at Deephaven Elementary School in Wayzata, Minnesota. The program is delivered via a five-minute-per-day learning management system. It’s available to all schools for free.

Roy Sommerhof is retiring as the vice president of stadium operations for the Baltimore Ravens.

Sommerhof began working for the team during its inaugural 1996 season. He manages all aspects of M&T Bank Stadium, including parking and transportation, security, guest services, catering, medical services and stadium maintenance.

“Roy’s contributions to the Ravens are immense,” team president Dick Cass said. “Leading with professionalism, dedication and a forward-thinking mindset, he’s played an integral role in every aspect of our stadium operations.”

Prior to joining the Ravens, Sommerhof spent 16 years working in ticket sales and stadium operations for the Baltimore Orioles, and he played a role in the 1992 opening of Oriole Park at Camden Yards.

Sommerhof’s retirement is set for the end of this season.