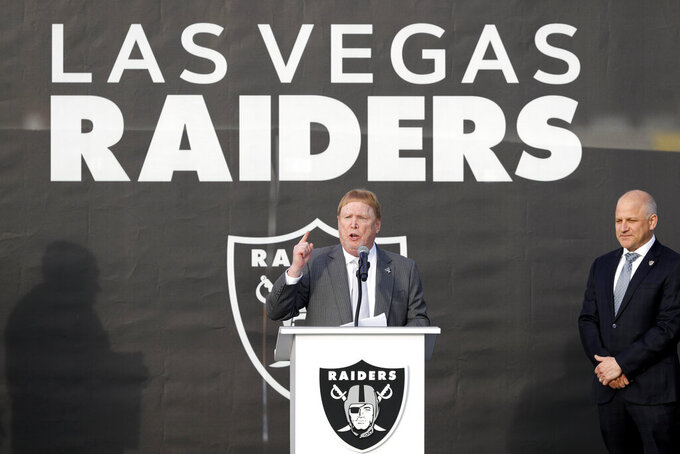 The Las Vegas Raiders spent most of the free agency period bolstering one of the NFL's worst defenses, with one glaring exception.

While the Raiders added a pair of starting linebackers in Cory Littleton and Nick Kwiatkoski, a new free safety in Damarious Randall and rotational players on the defensive line in Carl Nassib and Maliek Collins, they were unable to add much of anything at cornerback.

The team made a run at free agents like Byron Jones and Chris Harris Jr., who ended up signing elsewhere, and had a deal with Eli Apple fall through over a failed physical.

So now heading into the draft, general manager Mike Mayock has few proven options on his roster at a crucial position. But that doesn’t mean he’s ready to take a cornerback with one of his two first-round picks at No. 12 and No. 19 overall.

“I think the biggest mistake that people make is trying to reach for needs,” Mayock said Tuesday. “The board will fall whatever way it falls. If we’re fortunate enough to get a corner, that would be great.”

There are plenty of promising cornerback prospects who should be available in the first round if Mayock decides to go in that direction.

The Raiders currently have eight cornerbacks on their roster, but only Nevin Lawson and Ken Crawley have started more than 10 games in the NFL and neither are proven options.

The Raiders are high on second-year player Trayvon Mullen, who showed some flashes in starting the final 10 games last season after being drafted in the second round. Isaiah Johnson and Keisean Nixon played only sparingly as rookies but also could contribute this year.

“We feel like we have a bunch of talented young kids that we don’t know enough about yet,” Mayock said. “We have four or five young corners that we’re kind of intrigued by. Do we think we need to get better there? Yeah.”

Tight end didn't appear to be a position of need, with breakout star Darren Waller set at starter and Foster Moreau expected to be fully recovered from a knee injury that cut short a promising rookie year. The Raiders also have versatile Derek Carrier but still signed Witten, who turns 38 next month.

“If there’s a Mount Rushmore of NFL tight ends, he’s on it,” Mayock said. “I know he’s 37 years old and I know we have a pretty good tight end room, but when you talk about bringing in a guy like him, not only can he still play ... but on top of that, he brings this wealth of knowledge about how to be a professional.”

Mariota also gives the Raiders a proven backup at quarterback behind starter Derek Carr. The No. 2 overall pick by Tennessee in 2015, Mariota lost his starting job last season with the Titans

Mariota dealt with a revolving door of play-callers and receivers during his time in Tennessee. He made 61 career starts and played 63 games in five seasons, with his best performance coming during his second year in 2016 when he threw 26 touchdown passes and had a 95.6 passer rating.

Both Mayock and coach Jon Gruden were high on Mariota going into the draft and still believe he has talent.

“He has to get healthy,” Mayock said. “We’re going to rebuild him a little bit and get his confidence back and build him up from the ground up. It’s going to take a little while to get him healthy and where he wants to be. We’re excited about the quarterback room.”