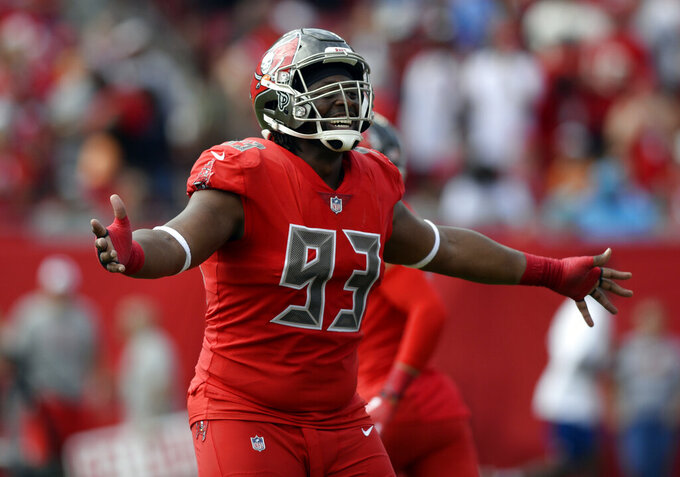 FILE - In this Dec. 2, 2018, file photo ,Tampa Bay Buccaneers defensive tackle Gerald McCoy (93) celebrates an interception by defensive back Andrew Adams during the first half of an NFL football game against the Carolina Panthers in Tampa, Fla. Free agent defensive tackle Gerald McCoy will visit the Cleveland Browns, who hope to sign the six-time Pro Bowler. General manager John Dorsey said Thursday, May 23, 2019, that McCoy, who was released earlier this week in a cost-cutting move, will be at the team’s facility Friday. (AP Photo/Jason Behnken, File)

CLEVELAND (AP) — The Browns will get to show Gerald McCoy how far they've come.

The free-agent defensive tackle, released earlier this week by the Tampa Bay Buccaneers, will visit Cleveland on Friday. General manager John Dorsey said the meeting will be an opportunity for both sides to see if they want a future together.

"It's a chance for us to kind of get a chance to meet each other one on one, and let's find out who Gerald is," Dorsey said Thursday during a downtown celebration for Cleveland's selection by the NFL to host the 2021 draft. "It also gives Gerald a chance to see who the Cleveland Browns are and what direction we're headed."

A six-time Pro Bowler, McCoy was let go after the Bucs couldn't find a trade partner willing to take on his $13 million salary. They agreed to terms with Ndamukong Suh to take his spot.

Several other teams have expressed interest in McCoy, the No. 3 overall pick in the 2010 draft. The 31-year-old had a down year — by his standards — in 2018, but Dorsey believes McCoy isn't close to being finished.

Dorsey downplayed the significance of McCoy agreeing to meet with the Browns, who have major expectations in 2019 following an offseason in which the team added star wide receiver Odell Beckham Jr., defensive tackle Sheldon Richardson, and edge rusher Olivier Vernon.

"We're going to turn over every rock and let's just see what happens," Dorsey said. "I mean, it's just a visit."

But the idea of adding McCoy to a defensive line rotation that already includes Pro Bowler Myles Garrett, Richardson, Vernon and Larry Ogunjobi, has Browns fans even more excited.

"I think a lot of Gerald," Monken said following Wednesday's practice. "Gerald has had a tremendous career and was an outstanding football player for us. He's a great person."