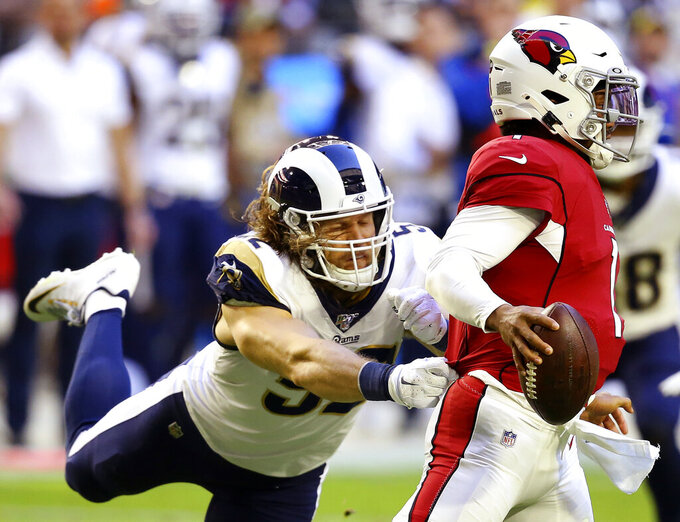 FILE - In this Dec. 1, 2019, file photo, Arizona Cardinals quarterback Kyler Murray (1) is pressured by Los Angeles Rams outside linebacker Clay Matthews during the first half of an NFL football game in Glendale, Ariz. Matthews is still unsigned as Week 1 of the NFL season begins. (AP Photo/Ross D. Franklin, File)

NEW YORK (AP) — Roster cuts were made and practice squads filled out around the NFL during what's always a busy weekend on the league's waiver wire.

Several familiar names and players on roster bubbles took turns on the unemployment line — with some finding new jobs.

As teams now turn their focus to preparing for Week 1 after what has been an unusual summer because of the coronavirus pandemic, coaches and general managers are scouring the free agents lists with one big question:

Who's left that could help us?

In a nutshell, there aren't as many big-name veterans on the open market as there might usually be, especially at the quarterback spot. Some of that might be attributed to the fact teams can keep a practice squad of 16 players — up from the usual 10 — and as many as six of them could be vets who have accrued any number of seasons in the NFL.

Other teams are also playing it safe — and probably smart — by keeping players around at key spots, such as the Jets having five total QBs (Sam Darnold, Joe Flacco, David Fales, Mike White and James Morgan) combined on their active roster and practice squad.

Some of the biggest unsigned free agents through the summer ended up finally latching on with teams late in camp or even after, such as Jadeveon Clowney (Titans) and Logan Ryan (Giants). Adrian Peterson was cut last week by Washington, but quickly landed in Detroit.

Here's a look at notable available players at each position:

Slim pickings here, and that's not counting Colin Kaepernick, who hasn't played since 2016. Bortles is just three years removed from leading Jacksonville to the AFC championship game, but spent last season with the Los Angeles Rams as a backup. Kessler, Kizer, Siemian and Stanton all have previous starting experience in the NFL.

Freeman had a visit with the Jaguars, but left without a deal. The 29-year-old Miller was in camp with the Patriots, but was cut Saturday. He was scheduled to visit the Bills.

Brown wants to play again, but was suspended the first eight games of the season by the NFL for multiple violations of the league’s personal-conduct policy. Bryant, also looking for a comeback, had a tryout with Baltimore last month. Sanu and Butler could find jobs over the next few days after being cut over the weekend.

The 36-year-old Walker spent much of last season on IR with an ankle injury, but still might provide a team a veteran boost at the position.

Lots of veterans here with plenty of starting experience all over the O-line. Any of these players could be on teams' short lists to bring in because of an injury.

Both Dareus and Harrison have been among the NFL's top run-stopping D-linemen in recent seasons. Ansah has dealt with injuries in recent seasons, but is healthy and recently worked out for the 49ers.

The 34-year-old Matthews' days as a dominant pass rusher are behind him, but he still can provide a presence off the edge for a defense needing a final piece. Ogletree has been a tackling machine for most of his career. Bradham was cut by the Saints last month a few weeks after signing as a free agent.

Trumaine Johnson, Aqib Talib, Prince Amukamara, Tramon Williams, Ross Cockrell, Morris Claiborne, Coty Sensabaugh. Johnson was released by the Jets in June after being a massive disappointment after signing a five-year, $72.5 million contract in 2018. Talib has been one of the league's best, but he's 34 and spent the last half of last season on IR.

Thomas obviously stands out in this group and his on-field performance is unquestioned. But, he punched Baltimore teammate Chuck Clark during practice last month and was released by the Ravens a few days later because of the incident.

Hauschka was cut by the Bills and his name will surely be linked to any team that has struggles with their kicker early in the season. Gay's release by Tampa Bay was also a bit unexpected after a mostly solid year, but the Buccaneers opted to go with Ryan Succop. The 47-year-old Vinatieri still wants to play, but had career lows in field-goal percentage and extra-point percentage before a knee injury ended his season.

Dustin Colquitt was on this list until Monday, when he signed with Pittsburgh following his release by Kansas City after 15 years. Bosher had a tryout with the Bills, and Edwards was in camp with them this summer.