Fresh off back-to-back wins, Titans have some issues to fix 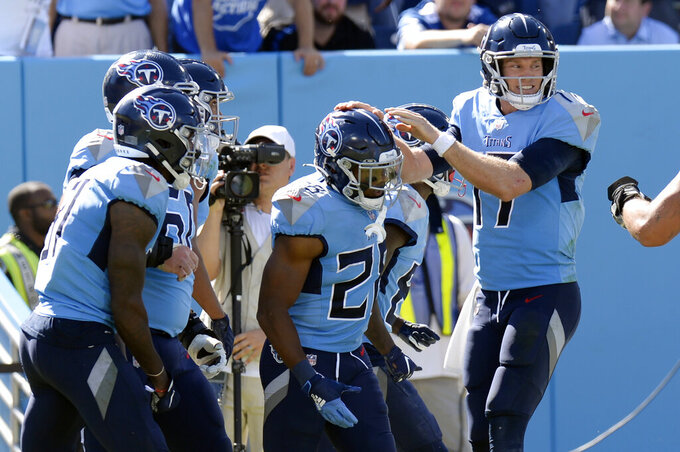 Tennessee Titans running back Jeremy McNichols (28) is congratulated by quarterback Ryan Tannehill (17) after they teamed up for a 10-yard touchdown pass against the Indianapolis Colts in the second half of an NFL football game Sunday, Sept. 26, 2021, in Nashville, Tenn. (AP Photo/Mark Zaleski)

NASHVILLE, Tenn. (AP) — The Tennessee Titans are 2-1 despite not making anything easy on themselves.

A week after going to overtime for a big win at Seattle, the Titans turned the ball over three times and yet found a way to win for the first time in that situation since October 2007. They can thank their defense for allowing only one touchdown off those mistakes in a 25-16 win over the Colts.

Coach Mike Vrabel made it pretty clear he wasn't happy. Not with the turnovers. Not with a defense that has only one takeaway through three games, back in a season opener that the Titans lost.

The Titans do have some momentum with back-to-back wins and a chance to fix some things over a two-game road swing against a pair of winless teams. They visit the Jets (0-3) on Sunday followed by a trip to Jacksonville (0-3).

Ryan Tannehill said they are going to face adversity every week. He said the key is finding a way to battle through and stick together helps.

“We have to continue to work at it and clean things up," Tannehill said. "If we can have that belief in each other and that confidence that we can fight through adversity, and the more times we actually do it on Sundays, it builds that confidence.”

The Titans can play keep-away, holding the ball an average of 33 minutes, 27 seconds per game. They also outgained Indy 368-265, which would've been higher if not for those turnovers — two inside the Colts 20.

A defense much-maligned in 2020 with so many new starters also had its best game yet with a season low in points allowed. A unit last on third down conversions last season held the Colts to 3 of 12 (25%), and the Titans held Indianapolis to field goals twice when having first-and-goal inside the 10.

Ball security. The Titans are next to last in the NFL with a minus-6 turnover margin after leading the league in that category last season at plus-11. The Titans have seven giveaways and only one takeaway. That's after Tennessee had 23 takeaways in 2020 with 15 different players getting at least one.

Derrick Henry the receiver. The All-Pro has worked relentlessly to improve his pass-catching skills, and he already has 12 catches for 105 yards receiving through three games. He set a career high with 19 receptions last season with his career high in yards (206) in 2018.

And oh yeah, Henry turned in his best September in the NFL rushing for 353 yards.

LB Rashaan Evans. The No. 22 pick overall in 2018 already had the Titans decline earlier this year to pick up his fifth-year option. Now he's losing snaps. Evans started against the Colts, but he played about 20 fewer snaps than David Long Jr.

The sixth-round pick out of West Virginia in 2019 has started two straight games with Jayon Brown limited by an injured hamstring. When Brown comes back, Evans could be the linebacker whose starting spot is gone.

Rookie outside linebacker Rashad Weaver, who needed crutches and a cart after hurting his right foot, will be out for a while. Pro Bowl wide receiver A.J. Brown played eight snaps before watching the rest of the game with an injured hamstring.

12. The career-high pressures linebacker Harold Landry had against the Colts. That was a 37.5% pressure rate rated by Next Gen Stats as the third-highest pressure rate with a minimum of 30 pass rushes since 2016 behind only Jerry Hughes for the Bills in Week 3 of 2018 and Bucs' Shaq Barrett in Week 3 of 2019.

The Titans have a couple of must-win games in their two-game road swing. After they visit the Jets and Jaguars, they return home to host the Buffalo Bills (2-1) in prime time followed by Kansas City coming to Nashville on a short week.