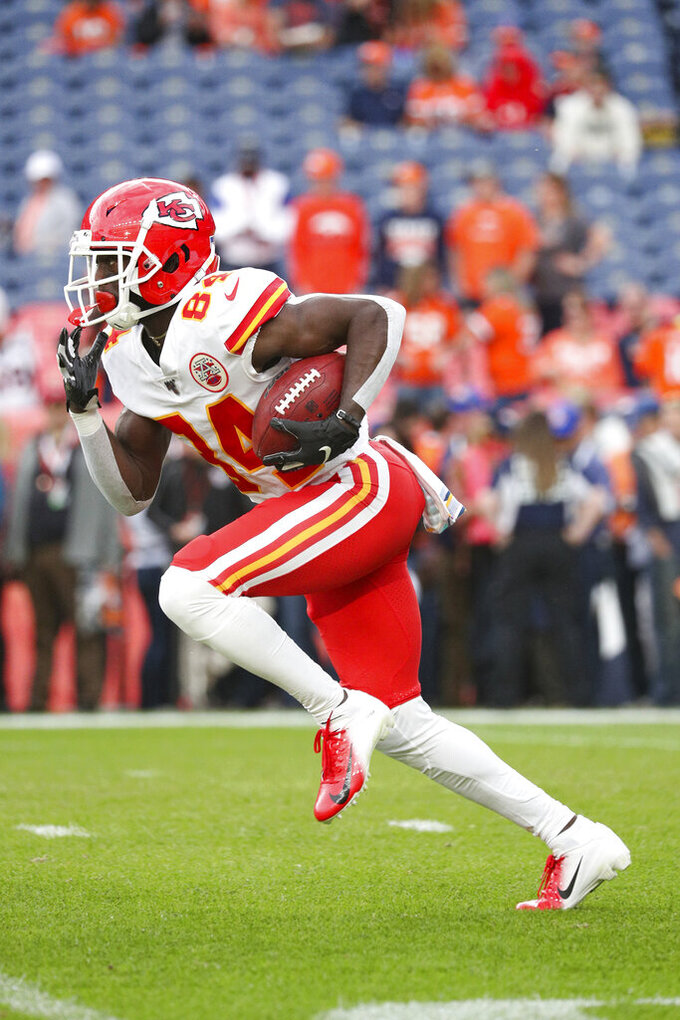 Kansas City Chiefs wide receiver De'Anthony Thomas (84) returns a kickoff during warm-ups prior to an NFL game against the Kansas City Chiefs, Thursday, Oct. 17, 2019, in Denver. The Chiefs defeated the Broncos 30-6. (Margaret Bowles via AP) 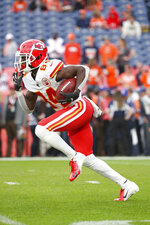 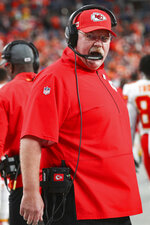 KANSAS CITY, Mo. (AP) — The prospects of Kansas City slowing down the Green Bay Packers, fresh off their blowout win over Oakland, probably feel a whole lot better after the way the Chiefs played last week.

Their defense, so maligned for years under coordinator Bob Sutton and not a whole lot better under replacement Steve Spagnuolo, finally clicked in what turned into a 30-6 rout of the Broncos.

The Chiefs held Denver to 205 yards. They sacked the Broncos' Joe Flacco six times in the first half and nine overall. They stuffed running backs Phillip Lindsay and Royce Freeman, mauled their offensive line and pitched a shutout for about 55 minutes.

The reason their dominance didn't raise more eyebrows? The Chiefs lost quarterback Patrick Mahomes to a dislocated patella, and the focus of the football world was on the league MVP's right knee.

"We felt like it was close," Chiefs coach Andy Reid said of his defense. "I know sometimes it didn't look that way for people. You talk about all those stats like the red zone and quarterback ratings and all the things that go with it, but it doesn't mean much until it all comes together.

"Now it's important to continue building on that," Reid continued," and that will be a challenge as we go forward. This isn't the end of the season, so we have to keep going."

Indeed, the challenge grows exponentially with Aaron Rodgers and Co. rolling into town.

Rodgers threw for 429 yards and five touchdowns while running for another in the Packers' 42-24 win over the Raiders. And he did it all without top wide receiver Davante Adams, who missed another game with toe turf and could be out again when Green Bay visits Arrowhead Stadium on Sunday night.

"They're playing real good football. We know that," Reid said. "We're starting the process here of getting ready and we'll continue that through Saturday. But all three phases are going well for them."

There are reasons to believe the Chiefs will be up to the challenge, though.

First of all, they are finally getting healthy on defense. Middle linebacker Anthony Hitchens came back last week to get a couple of sacks and force a fumble. Defensive tackle Chris Jones could be back from his groin injury this week, giving the Chiefs their best interior defensive lineman.

Defensive end Frank Clark missed practice earlier this week with a sore neck, and an illness put defensive end Tanoh Kpassagnon and linebacker Darron Lee on the sideline. But all three of them could be back against the Packers, giving the Chiefs nearly all their starters on that side of the ball.

The second reason the Chiefs could be up to the challenge? They are finally picking up Spagnuolo's defense. The Chiefs had run a 3-4 system the past six seasons under Sutton, and Spagnuolo junked that in favor of a 4-3 set, and it took a while for players to adjust to new alignments and assignments.

"We're just doing what got us here, what got us in this situation and what got us into the league," Chiefs linebacker Reggie Ragland said. "Just playing football and having fun, that's the main thing. You can't do too much. Just have fun with it."

It's a lot more fun when teams aren't running roughshod over you.

The Chiefs had allowed at least 400 yards in four of their first six games, and the other two weren't a whole lot better. And they had been equal opportunity sieves, giving up 347 yards passing to the Jaguars and coughing up more than 200 yards rushing to the Ravens.

Have the Chiefs finally turned the corner? Or was their performance against the Broncos simply a fluke, a special night when everything came together against a struggling offense?

"I'm hoping it sustains a long way," Spagnuolo said. "The only comment I made to our guys, our hope is that when this is all done, that's not the best game we played. That would be the hope."