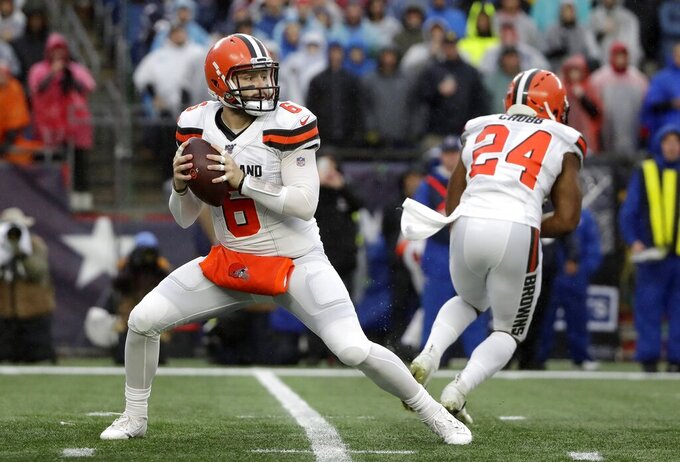 Cleveland Browns quarterback Baker Mayfield drops back to pass against the New England Patriots in the first half of an NFL football game, Sunday, Oct. 27, 2019, in Foxborough, Mass. (AP Photo/Elise Amendola)

Annoyed with a reporter's line of questioning about a drive at the end of the first half in last week's loss at New England, the Browns fiery quarterback abruptly ended his weekly interview session on Wednesday and stormed off.

Mayfield, who is tied for the NFL lead with 12 interceptions, grew increasingly agitated when a reporter asked him about a failed two-minute drive in a 27-13 loss to the Patriots. The Browns were called for a penalty, which Mayfield said prevented them from moving the ball.

"Was I happy with the drive? No, we didn't score points," Mayfield chirped. "That's the dumbest question you could ask. What?"

Mayfield then disgustedly walked away from the lectern and toward his locker.

Soon after, the former No. 1 overall pick went on Twitter to explain his exasperation. Picked by some experts to win the AFC North, the Browns (2-5) haven't played up to enormous expectations and have lost three straight games.

"Everybody wants to hear the truth until they actually get it," Mayfield wrote. "I am who I am and always have been. Don't call it emotional when it's convenient and then passion when it fits. I care about winning, so yeah I'm frustrated.

"If I was to act like it's okay to lose, then y'all would say that I've gotten complacent. My sense of urgency is at an all time high. And if I offend anybody along the way. that's too bad."

Before his minor meltdown, Mayfield was cordial while answering questions about Cleveland's numerous issues this season. The Browns lead the league with 70 penalties, the offense has been unable to find a consistent rhythm and Mayfield has thrown just six touchdown passes after setting the league rookie record with 27 last season.

He's ranked 32nd with a 57.6 percent completion rate, and Mayfield — along with Browns first-year coach Freddie Kitchens — haven't figured out how to best use wide receivers Odell Beckham Jr. and Jarvis Landry, who have combined for one TD reception.

Mayfield has had a somewhat strained relationship with the Cleveland media since he arrived in 2018. He's been defensive about some things, but this was the first time his temper got the best of him.

The exchange Wednesday began innocently with a reporter asking why there didn't seem to be urgency late in the half.

"When the penalty happened, then we were behind the chains," Mayfield countered.

When the reporter interjected with, "but," Mayfield shot back.

"No, stop saying 'but.' I just told you the clock was running and we had a penalty," Mayfield snapped. "Do you want to give them the ball back? No. You do not play; you do not know it. That is just plain and simple."

Walking away angrily from a media session isn't a major sin, but it's not a great look either for a team leader or the player dubbed as the face of Cleveland's franchise.

"I understand his passion and his desire to win," he said. "He really wants to be the best and I feel like in that situation he feels like he's being attacked. He probably feels like he answered the question to his fullest ability and he feels like it's being piled on.

"Is it the right thing to do to storm off? Probably not, but that's his personality. He's fiery, he wants to be the best, and I think that just shows that he's trying to get us to a certain level."

Bitonio doesn't feel the need to discuss the situation with Mayfield.

"It's one of those situations where I just kind of keep my hands out of it and let Baker be Baker," he said. "That's just who he is."

Mayfield's emotions fuel him on the field, where he's willing to engage in trash talk with opponents or join his teammates for an end-zone celebration following a score. He developed a reputation for brash behavior for some on-field antics while winning the Heisman Trophy at Oklahoma.

He's been mostly well-behaved as a pro, but his second season has been a major struggle. After playing one of the league's toughest schedules through seven games, the Browns visit Denver (2-6) on Sunday before playing three straight home games.

"We have to take responsibility and take it personal to do our jobs the very best to the highest ability," he said. "Doing everything right. Physical mistakes are going to happen, but that is OK. Guys understand that we are human, but the mental aspect of it and the penalties and things like that are things we need to iron out, and that we will get fixed."

NOTES: The Browns claimed LB Tae Davis on waivers from the Giants, who released him earlier this week. He's appeared in 18 NFL games with five starts. Cleveland had an open roster spot after DE Genard Avery was traded Monday to Philadelphia. ... S Damarious Randall remains sidelined with a hamstring injury sustained on Oct. 13 against Seattle.