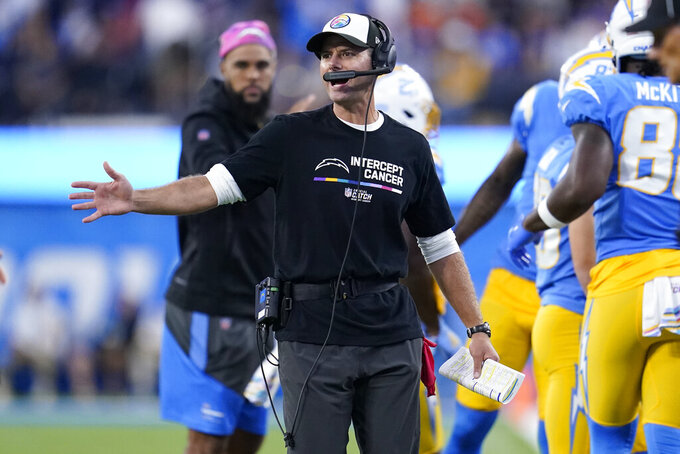 Los Angeles Chargers head coach Brandon Staley reacts to a call during the first half of an NFL football game against the Denver Broncos, Monday, Oct. 17, 2022, in Inglewood, Calif. (AP Photo/Marcio Jose Sanchez)

COSTA MESA, Calif. (AP) — Jerry Tillery was already expected to be in his last season with the Los Angeles Chargers after the team declined to exercise his fifth-year option during the offseason. It turns out the exit happened sooner.

Tillery hit the NFL’s waiver wire on Friday after the team announced Thursday night they would release him. The defensive lineman was the Chargers’ first-round pick in 2019, going 28th overall in the NFL draft.

“I think there’s a point in relationships like this where you have to move on. It’s best for both people to move on; that’s just what happened here,” coach Brandon Staley said after the 4-3 Chargers finished preparations for Sunday night’s game at San Francisco.

After Austin Johnson was lost for the year with a knee injury in last Sunday’s 20-17 win over the Atlanta Falcons, some figured Tillery would see his snaps increase. However, the Chargers were set to go a different route after signing Breiden Fehoko from the practice squad, along with practice squad player Joe Gaziano also making headway toward either being signed or being elevated to the gameday roster.

Staley noted that Tillery and the team had competing visions regarding his role moving forward.

“It just became clear that it wasn’t going to be a fit anymore,” Staley said. “We are going to give Breiden and Joe a chance to compete. With where we’re at and what we’re trying to do with our team — on the defensive line, our defense, on the whole team — trying to create competition and have guys earn their roles. That’s what we want to be here. When those things didn’t line up, we had to make a change.”

Tillery appeared in 54 games for Los Angeles, with 106 tackles, 10 1/2 sacks, three forced fumbles and a fumble recovery. A team will likely claim him by Monday’s waiver deadline.

It is the second time a first-round pick from the 2019 class has been waived in less than a week. On Tuesday, the Las Vegas Raiders waived safety Johnathan Abram, who went one pick before Tillery at 27th overall.

Notes; WR Keenan Allen (hamstring), WR Mike Williams (ankle) and K Dustin Hopkins (hamstring) have been ruled out for Sunday night. ... LB Chris Rumpf (knee) is doubtful and OT Trey Pipkins (knee) is questionable. ... If Pipkins is unable to go, Storm Norton or Foster Sarell would get the start at right tackle. Sarell would need to be elevated from the practice squad.