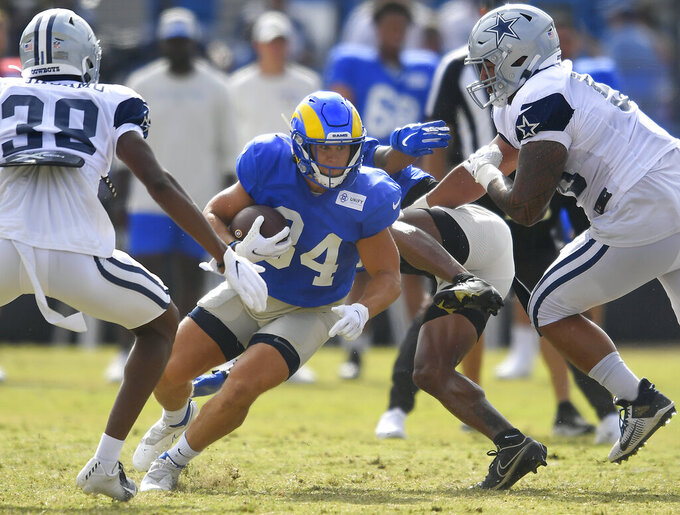 IRVINE, Calif. (AP) — The Los Angeles Rams will need reserve running backs Jake Funk and Xavier Jones this season, as they were reminded when starter Darrell Henderson Jr. came out of practice because of a hand injury on Tuesday.

Henderson ran into a teammate at the end of a carry during a live team period, fumbling the ball. The third-year back from Memphis then spent several minutes flexing his right hand and being examined by trainers.

After going back to the locker room, Henderson returned during the next period with his wrist taped.

“He ended up coming back in,” coach Sean McVay said. “He got his hand just kind of hit in the middle of practice, and so he was just getting that checked out."

The Rams lost Cam Akers, who emerged as the lead back late in his rookie season, to a torn Achilles tendon sustained during an offseason workout. Henderson has been productive when healthy, but he has also missed time with ankle, thigh and hamstring injuries in his first two seasons with Los Angeles.

From the group of inexperienced four tailbacks behind Henderson, Jones and Funk have emerged as depth options that might be called on to do even more.

“I think both X and Funk have done a really nice job. Those guys, if they continue on this trajectory, they’re going to be a part of our plans in the running back room,” McVay said.

Jones could be valuable in the passing game. He had 72 receptions for 488 yards and three touchdowns in five seasons at SMU playing in a spread offense under coach Sonny Dykes.

Quarterback Matthew Stafford had success in his 12 seasons with the Detroit Lions finding running backs such as D’Andre Swift and Theo Riddick for completions. The 5-foot-11, 208-pound Jones could be that option for the Rams, and his dependability as a blocker means it would make sense to have him on the field in throwing situations.

“Sonny ran an Air Raid offense so we threw the ball majority of the time, so pass protection is one of the main things we did in college,” said Jones, who is going into his second season. “And if you don’t pass pro in NFL, you won’t be on the field so that’s a main priority for me. I’m handling it.”

Funk, a seventh-round draft pick from Maryland, seems like he might be well-suited for carrying the ball at the goal line or in short yardage. Those were some of the situations Funk worked in during a joint practice with the Dallas Cowboys on Saturday.

A 5-foot-10, 205 pound rusher who had two major knee injuries in college, Funk has seen increased reps as the Rams have been working in full pads. Those sessions provide a more realistic sense of what the running game should look like.

Funk feels like he has settled in well during the Rams’ time at UC Irvine, where they broke camp following Tuesday’s practice. They will now move to the team’s facility in Thousand Oaks for the rest of the preseason.

The biggest adjustment for Funk has been working with Stafford and left tackle Andrew Whitworth and against defensive tackle Aaron Donald and cornerback Jalen Ramsey. Being on the same field as them still takes some getting used to.

“Last season I was surrounded by a bunch of college football players, and now I’m surrounded by some of the best NFL talent that the last decade has seen, and, I mean, it’s definitely crazy,” Funk said. “But at the same time I come in with the confidence that I belong, and you have to have that type of confidence to be able to perform at this level.”

NOTES: CB Darious Williams did not practice because of an ankle injury. … WR Van Jefferson was not available following a suspected false positive for COVID-19, McVay said.