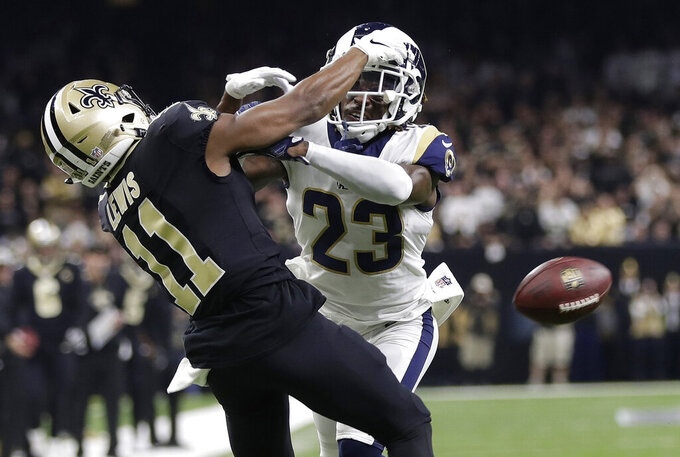 FILE - In this Jan. 20, 2019, file photo, Los Angeles Rams' Nickell Robey-Coleman breaks up a pass intended for New Orleans Saints' Tommylee Lewis during the second half of the NFL football NFC championship game in New Orleans. From the “Boycott Bowl” to the “Dunk the Referee” dunk tank, people in New Orleans are finding creative ways to spend their Sunday instead of watching the Super Bowl. Fans are still angry over how the Jan. 20 NFC championship game ended. (AP Photo/Gerald Herbert, File)

NEW ORLEANS (AP) — From the "Boycott Bowl" to the "Dunk the Referee" tank, people in New Orleans are finding creative ways to spend Sunday doing anything but watching the Super Bowl.

As the rest of the country gathers to watch the New England Patriots face the Los Angeles Rams in the biggest football game of the year, Saints fans will be mourning a Super Bowl that might have been. An extensive list of bars and restaurants say they won't air the game and a wealth of alternative programming has sprouted up across the city for people to show their Who Dat spirit while boycotting the game.

"So many people wanted this and, more importantly, so many people needed this because we were robbed," said Kim Bergeron, a marketing and public relations specialist who put together one of three parades slated for Sunday.

Saints fans have been angry since the Jan. 20 NFC championship game and what has now become known as the infamous "no-call." A Rams defensive back leveled a Saints receiver with a helmet-to-helmet hit at a crucial point in the final minutes of regulation time. The Rams went on to win the game and will play the Patriots Sunday in Atlanta.

NFL officials acknowledged after the game that flags should have been thrown, but that's done little to soothe the ire in New Orleans and the state. Even Gov. John Bel Edwards suggested on Twitter that he'll be checking out Netflix Sunday instead of the Super Bowl.

But this is a city that once threw a party for a pothole and in recent years has staged parades to remember Fats Domino, David Bowie, Prince and "Star Wars" heroine Carrie Fisher. So the Sunday non-Super Bowl activities are taking on a festive rather than mournful air.

Travis Laurendine, an events promoter, and two friends have organized "Boycott Bowl," an outdoor street party with live musical performances and a specialty beer called Boycott Bowl Blonde Ale. The whole event came together in days after one of the friends posted a suggestion on Facebook about having a boycott festival on Feb. 3.

Like many of the Sunday activities, they're incorporating a philanthropic aspect. Net proceeds from the event will go to the New Orleans Recreation Development Foundation, which raises money for things like playgrounds or athletic equipment, Laurendine said.

"This is the most New Orleans thing that we could have possibly done," he said. "No one I know is watching the game anyway."

At Tracey's Original Irish Channel Bar, the 24 televisions will not be tuned into the Rams-Patriots game Sunday. Owner Jeffrey Carreras says after the "gut-wrenching loss" of the NFC championship game, he and his wife talked about having no interest in watching the Super Bowl. Then he talked with his manager about whether they — a sports bar — could just boycott the biggest sporting event of the year.

Instead, they'll show highlights from previous Saints seasons such as the first home game after Hurricane Katrina in the rebuilt Superdome when the Saints beat the Atlanta Falcons. Like many places across the city, he plans to show the 2010 Super Bowl that the Saints won.

A local restaurant called Dat Dog is hosting an "Anti-LIE Bowl Party" — a snarky play on Super Bowl LIII. Games like "Dunk the Referee" and "Pin the Bribe on the Official" will raise funds for a local charity, Son of a Saint, that helps boys without father figures.

Victoria Verhagen, the company's marketing director, estimated that very few people in New Orleans would be watching Sunday's game, and she hadn't heard of any bars or restaurants showing it either.

"If they are, they're keeping quiet about it," she said.