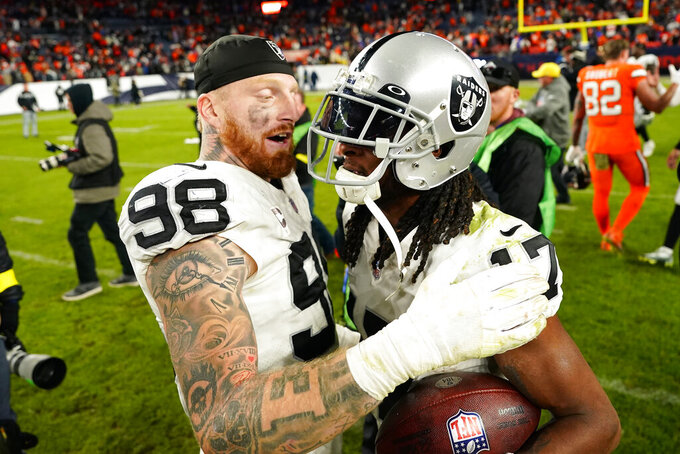 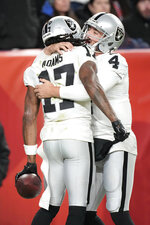 HENDERSON, Nev. (AP) — When the Raiders went for it all Sunday at Denver, they went to their top playmaker on a play that required savvy as well as skill.

Davante Adams' 35-yard touchdown catch that gave Las Vegas a 22-16 overtime victory over the Broncos was an example of how the wide receiver mentally and physically separates himself — this time literally, given how open he was — from most of his peers.

“I've played with a lot of receivers in my nine-year career, a lot of smart guys," quarterback Derek Carr said. "But Davante, he can see it like a quarterback.”

The winning TD was set up earlier in the game when Adams ran an over route to the left side, hauling in Carr's pass for 23 yards. That completion set up Las Vegas' first touchdown, a 31-yard pass to Adams in double coverage.

So with the game in overtime and the ball at Denver's 35-yard line, Raiders coaches designed a play to take the other receivers to the left side of the field, causing the Broncos' defenders to follow. The right side would be open, enabling the Raiders to run an isolation play with Adams.

Adams lined up on the right side and began to cut left as if he was running the same route he did on that key second-quarter catch. Broncos cornerback Pat Surtain II decided to cut off Adams as he headed his direction, not wanting to give up another long gain.

“The call was to read what was going on with his leverage and the coverage, but it was based on something we had seen earlier in the game,” Adams said. “Just kind of marrying the concepts together. If he overplayed it, then the idea was to run the route that I ran.”

When Surtain did just that, Adams cut back sharply to the right. As Surtain's momentum took him out of the play, safety Justin Simmons tried to make up the difference but was too far back, and Adams had the easy touchdown.

“I think the thing that makes Davante very special is just up here (mentally),” coach Josh McDaniels said. “He can think, process, understand the way he’s being covered, the way people are playing him, leverage, route technique, setting up his routes, doing a lot of different things that allow him to get open and be special.

“I think sometimes when young players come into the league, they think it’s all skill and talent, and that’s part of the equation, there’s no question. But I think the other part that he’s really mastered is his ability to set people up. He’s got great savvy and instincts, great awareness. Like the last play, that doesn’t happen if he doesn’t set it up the right way and really get the corner leaning to go across the field.”

Adams was open by 11.9 yards, according to Next Gen Stats, the largest amount of separation for an overtime touchdown since the league began tracking that information in 2016.

The concern for Adams after he made the move was whether Carr would have enough time to get him the ball. Carr was concerned he would overthrow his receiver.

But Carr never doubted whether Adams would properly read the coverage. He said Adams is on a short list of receivers who don't need to have plays explained to them.

“Tae is one of those guys where you really don't have to say anything,” Carr said. “He knows the coverage. He knows where I'm trying to put the football.”

Carr put the football on the open receiver, who not only outran the Broncos but outthought them.

“That's like 90% of what makes me me versus all the rest of the stuff that they talk about," Adams said. “There's a lot of studying and anticipation of knowing what's coming, or having an idea of what's coming and formulating a plan. If that plan is not the best, then it's adjusted from there, and you find the best way to do it based off how they're playing."

NOTES: CB Nate Hobbs (broken hand) returned to practice Wednesday, but McDaniels said no decision has been made on whether to remove him from injured reserve. ... McDaniels said he doesn't know if LT Kolton Miller (shoulder and abdomen) will play Sunday at Seattle.