Garoppolo must deal with Seattle crowd noise for 1st time 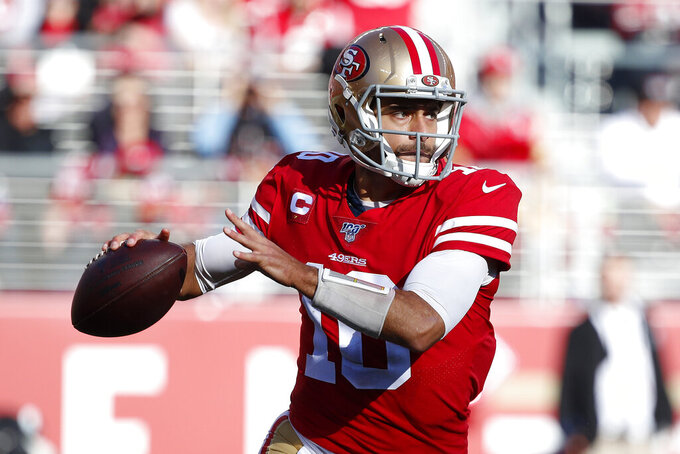 SANTA CLARA, Calif. (AP) — Sunday’s game against the Seahawks in Seattle will be the biggest test of Jimmy Garoppolo’s career.

Granted, he hasn’t had many tests yet — he has started only 25 games. And he has passed most of the tests opponents have presented him — his record is 20-5.

But Garoppolo hasn’t started a game at Seattle’s CenturyLink Field, one of the loudest, gloomiest, most difficult places for opponents to play in the NFL, particularly for inexperienced quarterbacks. Since 2010, QBs with 25 or fewer career starts have won just six of 28 games in Seattle.

If the 49ers lose on Sunday, they’ll be a wild-card team and start their quest for the Super Bowl on the road. But if they win Sunday, they will earn the No. 1 seed in the NFC and a first-round bye.

There's plenty at stake for Garoppolo and the 49ers in Seattle.

“They’ve had as good of a 10-year run defensively as probably anyone in the history of football,” 49ers head coach Kyle Shanahan said of the Seahawks. “Then you add in the elements of their stadium, where you can’t hear. When you can’t use cadence and you’re going up against a very skilled team with a pass rush, it’s extremely hard.”

Cadence is a quarterback’s snap count. Garoppolo won’t be able to verbally communicate on the field in Seattle, so the 49ers will have to use a silent count, which the Seahawks’ pass rushers can time and anticipate. Advantage: Seattle.

Garoppolo missed the 49ers’ game at Seattle last season with a torn ACL. His backup, Nick Mullens, threw for 414 yards — the most a quarterback with 25 or fewer career starts has ever recorded against the Seahawks in Seattle. Although Mullens handled the noise well, the 49ers lost 43-16.

How will Garoppolo fare?

“I can tell Jimmy it will be exactly like New Orleans was,” Shanahan said. “I’ve been in New Orleans a bunch, but it was different last time we were there. It was as loud as I’ve been anywhere. So last time in New Orleans was tied with how Seattle is. I thought Garoppolo handled himself well there, and expect him to do the same in Seattle.”

Garoppolo passed for 349 yards and four touchdowns at New Orleans on Dec. 8, and the 49ers beat the Saints 48-46. That was perhaps the best game of Garoppolo’s career, and it showed him what to expect Sunday in Seattle.

“It’s going to be a 60-minute game,” Garoppolo said. “You have to have your mind ready for that. When you get to these big games, two good football teams, it’s always going to go up until the last whistle, and we’ve had multiple experiences this year like that.”

The 49ers kept it close earlier this season at home against the Seahawks before losing in overtime. Garoppolo played poorly: His quarterback rating was 66.2, he fumbled twice and the Seahawks recovered both times.

Garoppolo played that game without his top target, tight end George Kittle, and wide receiver Emmanuel Sanders missed most of that game with broken ribs. Sanders and Kittle will play Sunday in Seattle, giving Garoppolo more weapons against the hostile crowd.

“There’s a chance they’re going to be frickin’ flying off the top of the roof,” Seahawks coach Pete Carroll said of the home crowd. “And there’s a really good chance it’s going to be as loud as it ever gets and as exciting as it ever gets.”

By Tom Canavan just now
By Tom Withers just now
By Schuyler Dixon 37 minutes ago
By The Associated Press an hour ago
By Dennis Waszak Jr. 2 hrs ago